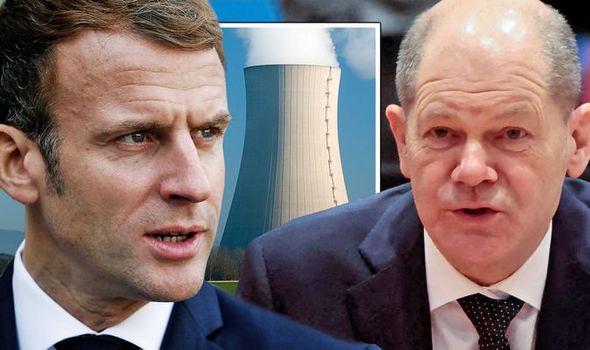 According to recent reports, France and the new government in Germany are butting heads over whether nuclear power should be viewed as “sustainable” as the bloc looks to switch to energy sources that have less of an impact on the environment. The EU Commission, in trying to appease both sides, has reportedly further enflamed disunity.

It comes as the EU is facing an ongoing energy crisis after a global shortage in natural gas supply last year saw rising prices and an impact on heavy industry.

The bloc, along with Germany, is also facing pressure from Russia to approve the Nord Stream 2 gas pipeline, which would channel natural gas directly into the EU, circumventing Ukraine.

Germany has increasingly distanced itself from nuclear energy since the Fukushima nuclear meltdown in Japan, following an earthquake in the region.

Three nuclear plants were shut down on New Year’s Eve last year, with the remaining three active plants expected to be shut by the end of 2022.

However, France relies on nuclear power for over 70 percent of its electricity and sees it as a viable alternative to fossil fuel.

It has 56 nuclear reactors currently in operation, according to the World Nuclear Association.

In order to satisfy the two nation’s disparate views on nuclear energy, German newspaper Bild reports that the EU Commission wants to declare not just wind and solar energy to be sustainable, but also gas and nuclear power – at least for a transitional period as it chases net zero carbon emission goals.

This, it said, would make nuclear power plants easier to finance.

However, the proposal is said to have sparked outrage, with the Austrian government so angered that it threatened to file a lawsuit.

The Austrian government previously initiated litigation against EU subsidies for the Hinkley Point C nuclear reactor in the UK, though this was rejected.

The issue threatens to destabilise the new “traffic light” coalition government in Germany of social democrats, liberals and greens.

Germany’s Chancellor Olaf Scholz, leader of the Social Democrat Party, is said not to be upset about the taxonomy regulation.

However, Ricarda Lang, deputy co-leader of the German Green party, said: “To classify nuclear power, which is a high-risk technology, as sustainable is like saying in food labels: alcohol is particularly healthy or chocolate is particularly rich in vitamins.”

Germany’s Environment Minister Steffi Lemke, also a Green politician, said it would be “absolutely wrong” to include nuclear energy on the list, arguing that it “can lead to devastating environmental catastrophes”.

Robert Habeck, the German Climate Minister and Green politician, said: “We do not foresee approval.”

However, German sentiments towards nuclear power are believed to be in a minority across the wider EU, and the proposal is expected to pass.

This is because at least 20 member states or a majority of the European Parliament would have would have to object to the proposal when it is put to them.

In an effort to put on a public display of unity as cracks begin to show, Germany’s Europe Minister Anna Luehrmann said on Friday that France and Germany have “agreed to disagree” on the matter.

Ms Luehrmann said that Germany may “have to go in a different direction” for “reasons of political independence”.

But, she also conceded that “we are not the majority in Europe” when it came to nuclear power.

“But this also means that if the worst comes to the worst, we have to recognise that we do not have a majority for our position on some decisions. That’s just how democracy works!”

He added that he does not see “how that can still be fended off”.