Ewe is found stabbed to death with inscribed pitchfork and cross

Satanic sheep killer strikes again: Ewe is found stabbed to death with inscribed pitchfork and cross made out of hay in Hampshire’s New Forest just weeks after animal was found with its entrails removed

A sheep has been stabbed to death and dumped in the middle of a road along with a cross made of hay and straw in a national park where spates of animal killings have sparked fears of a Satanic-style cult.

Police are probing the sheep’s death after it was discovered with a broken pitchfork left on its body and the peculiar cross.

Its owners say they are horrified by the killing in Cadnam, a village in Hampshire’s picturesque New Forest National Park. 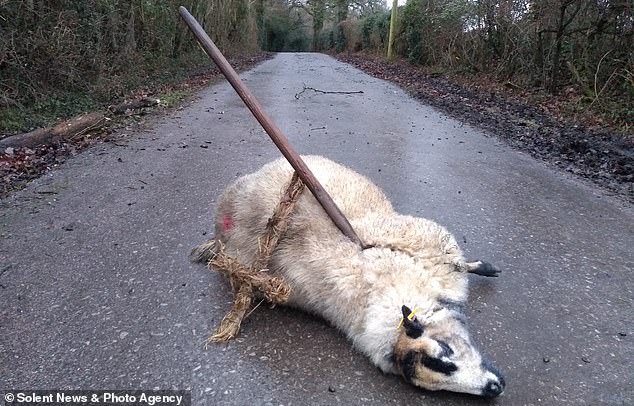 A sheep was found stabbed to death (pictured) with a broken pitchfork left on its body and a peculiar cross. An examination showed the sheep appeared to have been stabbed eight times 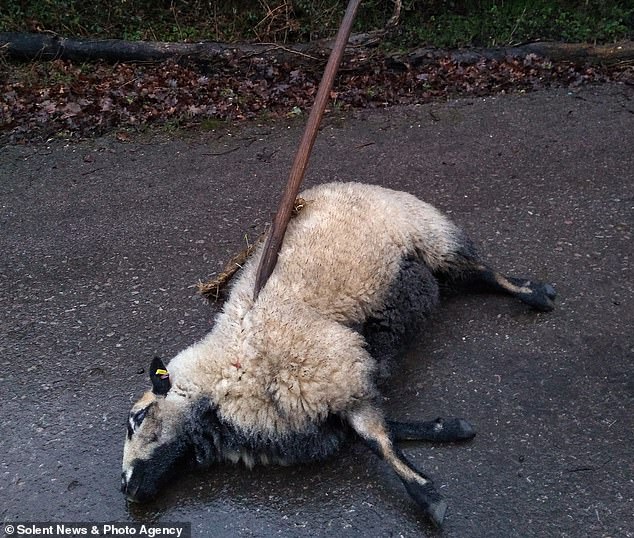 The sheep found dead on a lane in Cadnam, a village in Hampshire’s picturesque New Forest National Park. Its owners say they are horrified by the killing

The death is the latest in a series of mysterious and grisly livestock killings in the New Forest, which have been attributed to a Satanic-style cult.

Last month a sheep was found ‘slit from neck to crotch with entrails removed’ in the village of Boldre.

In November, a shocking photograph of a slaughtered sheep emerged showed it covered with pentagrams.

The animal was one of two sheep knifed to death during a spate of attacks within a few miles of each other.

Three cattle were brutally knifed, a heifer was injured and a 12th century church in the neighbouring parish of Bramshaw, where the two sheep where found, was also sprayed with Satanic symbols and the number ‘666’.

Police mounted extra patrols amid fears that members of a Satanic-style cult were active in the area.

Today the owner of the ewe dumped in Cadnam, 60-year-old farmer Wendy Maughan, said: ‘I’m extremely saddened that we seem to live in a society where someone gets pleasure by attacking and stabbing to death innocent, non-aggressive animals.’

One of her neighbours, Andrew Parry-Norton, said: ‘The ewe looked as if it had been dragged into the middle of the lane. 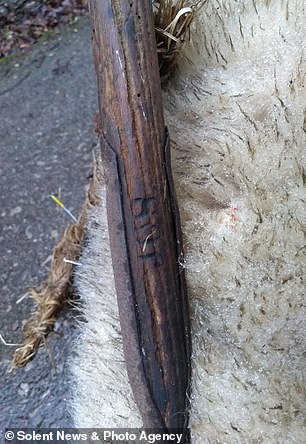 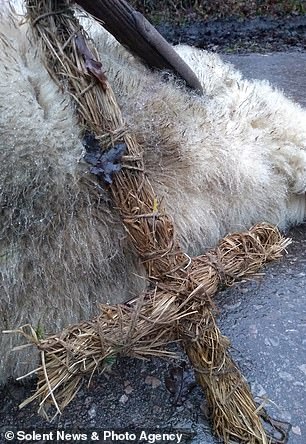 The old, broken pitchfork (left) with three initials inscribed onto it and the cross made out of hay and straw (right) that was found lying on and next to the sheep

‘A broken pitchfork had been placed on the sheep’s body, along with a cross made of hay and straw. It was very creepy.’

Mr Parry-Norton, 51, who runs a small farm, added: ‘It’s starting to get worrying in terms of putting animals out in the forest. We are also quite isolated up this lane and it’s all rather worrying.’

His wife, 53-year-old Sarah, was the first to find the dead ewe in the road.

She said: ‘I saw the dead ewe and then the wood sticking out of it. It was very disturbing and immediately I knew it was something rather dodgy.

‘The worrying thing for us is that whoever the perpetrator is, if they do that with animals, what would they do if you were to disturb or corner them while they were up to no good.’

An examination of the animal showed its body was covered in puncture wounds. It appeared to have been stabbed eight times – possibly with a long thin blade.

Ms Maughan believes the killings are being carried out by two or more people working together, who may have animal stunning equipment. 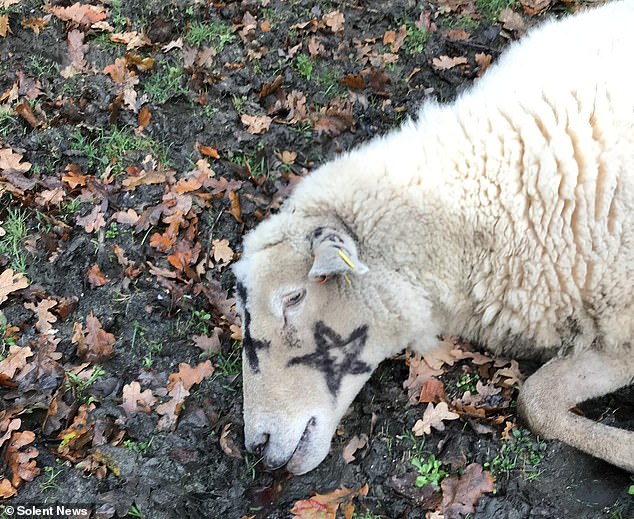 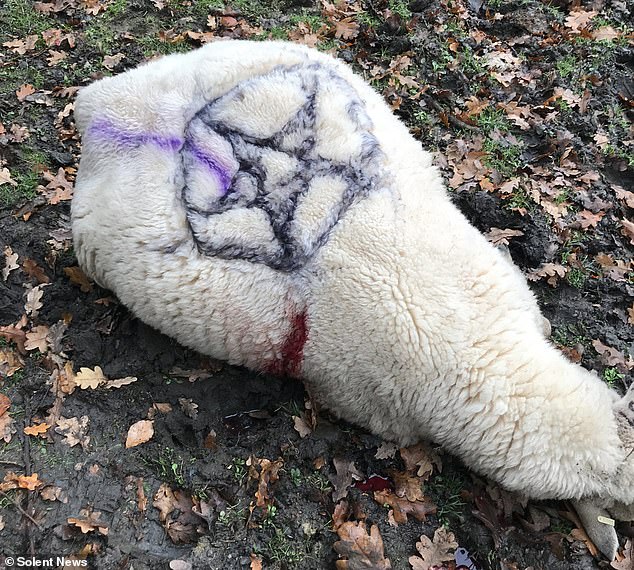 The sheep was sprayed with pentagrams and slaughtered in November last year. It is one of many in a series of mysterious and grisly livestock killings in the New Forest

She said: ‘They have got to have a knowledge of livestock to do this and there is quite some intent and planning involved – it is quite sinister in that respect. To fashion a straw and hay cross takes some effort.

‘The sheep had bedded down about half a mile away from where it was found so they had to kill it and then get it to there.

‘Sheep are quite strong and you have to know how to hold them so I think it’s more than one person and they may have stunning equipment.

‘It seems one person would have been holding our ewe and the other person stabbing it with the two pronged pitchfork. It’s not a nice way to be killed.

‘There wasn’t a pool of blood. The stab wounds were quite deep so it’s almost as if they hit the heart and know how to kill an animal.

‘It’s an evil thing to do. We try to give our sheep a good life out on the forest. To kill a sheep for no reason, for the fun of it rather than for food, is so wrong.’

A Hampshire police spokesman said: ‘It’s currently unclear how the sheep died. A pitchfork was found at the scene but it is not clear if it was used to kill the sheep.

‘We are looking into all lines of enquiry and will link together similar crimes if the evidence allows us to.’