A former soldier has built a stone castle into the side of a mountain to create a ‘therapy fort’ that can help veterans, NHS staff and others rebuild their mental health.

Ex-lance corporal Mike Allen, 41, has hoisted 100 stones up a steep hill on Mynyddislwyn mountain, near Wattsville, Gwent in Wales, to build the fort over the past three years.

The site is now home to his charity Endex, which supports the rehabilitation of veterans and others suffering with their mental health, and which has been ‘more important than ever’ following the onset of the Covid-19 pandemic.

Mike, who was previously homeless, first hit the news when he built a wooden hideaway as a way of dealing with his PTSD – only to see it bulldozed by environment bosses in 2018 because he didn’t have planning permission.

But after his story hit the papers, a year later a local land owner gave him permission to build his stone castle with a wooden roof as a safe space for struggling veterans like himself to get away for a peaceful break. 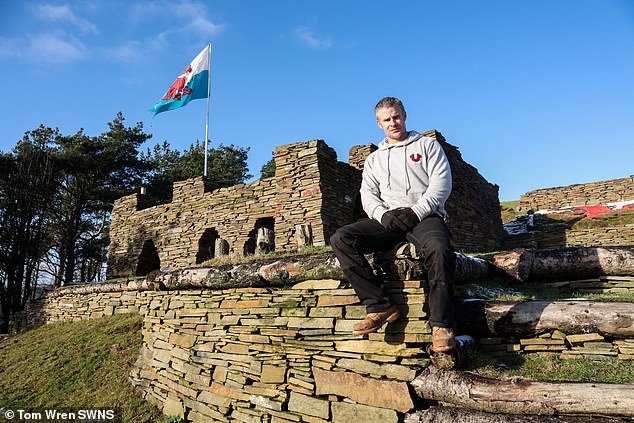 Ex-lance corporal Mike Allen (pictured with fort), 41, has hoisted 100 stones up a steep hill on Mynyddislwyn mountain, near Wattsville, Gwent in Wales, to build the fort over the past three years 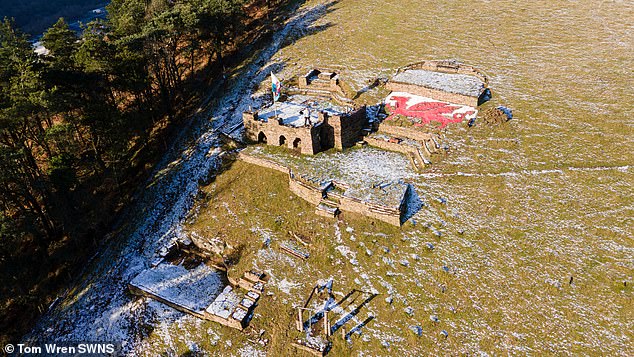 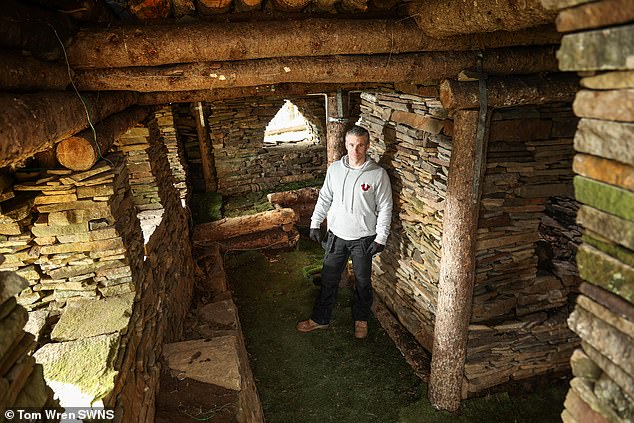 The fort is now home to his charity Endex, which supports the rehabilitation of veterans and others suffering with their mental health 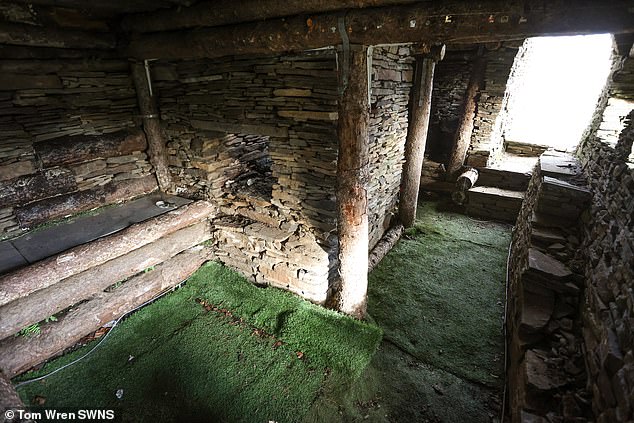 Interior of the fort shows seating areas and astroturfed flooring 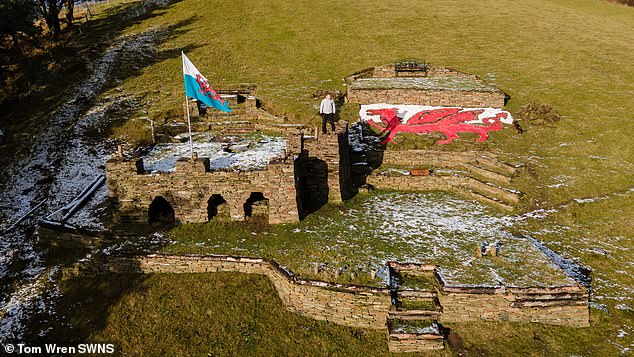 Mike (pictured standing atop his fort), who was previously homeless, first hit the news when he built a wooden hideaway as a way of dealing with his PTSD – only to see it torn down by environment bosses in 2018 because he didn’t have permission 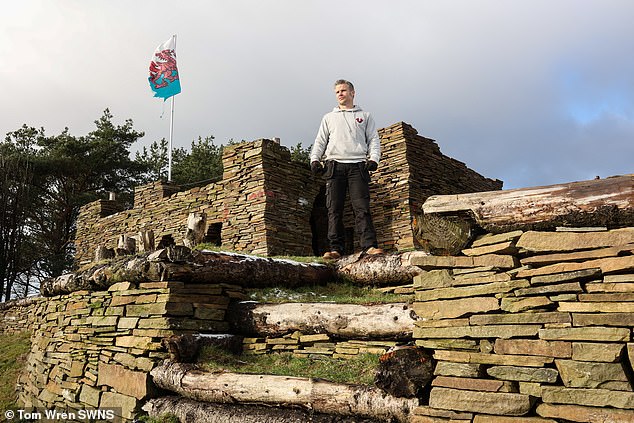 So far, the team have received over 2,500 visits to their fort 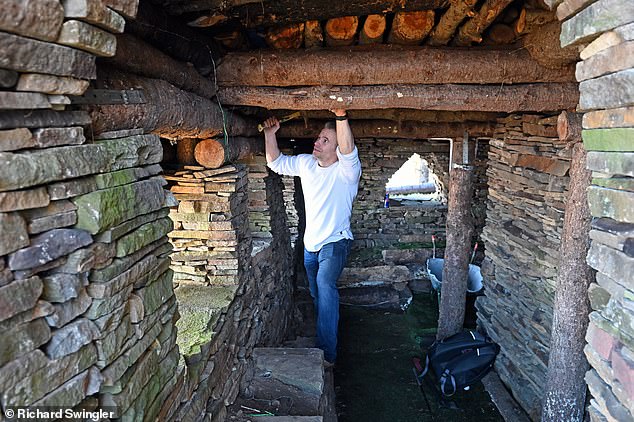 The fort is now the base of Mike’s mental health charity which supports anyone who needs help, including special needs children, military widows and stroke survivors 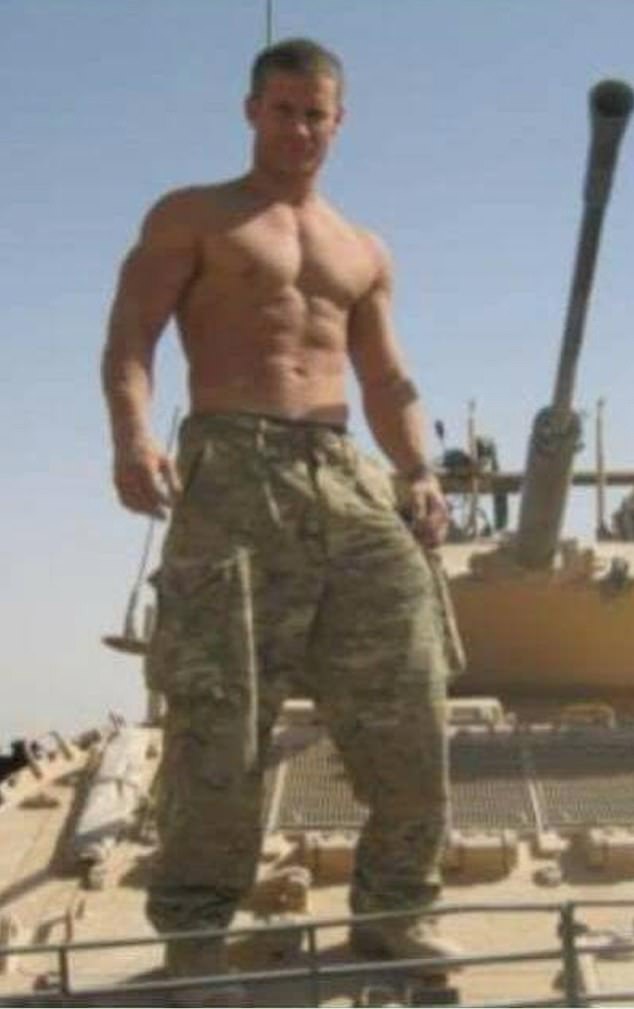 It is now the base of his mental health charity which supports anyone who needs help, including special needs children, military widows and stroke survivors – and which has been busier than ever since Covid and its lockdowns began wreaking havoc on people’s mental wellbeing.

The castle itself can sleep six people and comes complete with a gym area, cooking facilities and a giant chessboard.

Mike said: ‘The castle is made from over 100 tonnes of stone that I’ve collected.

‘All of the logs I chopped and carried across on my shoulder – all damaged trees.

‘Once the main cabin area was complete, I added a little gym area also made from wood, as well as a bench.

‘For every one hour of building, you have five hours of collecting stone. It’s small steps every day that make the biggest difference.

‘As it grew, so did I, and it’s given me a clear understanding of the values of having goals.’

He added: ‘We’ve had more than 2,500 visitors including those with special needs, children who’ve been expelled from schools, bereaved families who have come along for conversation.

‘We find that when they’re going through personal hardship, doing some sort of physical activity can distract them from the emotional distress of it, and they find they can tell their story right until the end without breaking down.’ 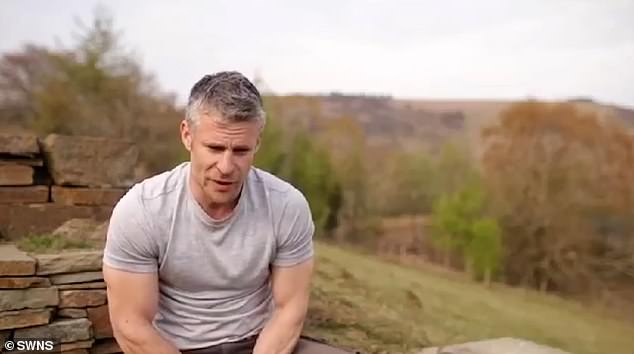 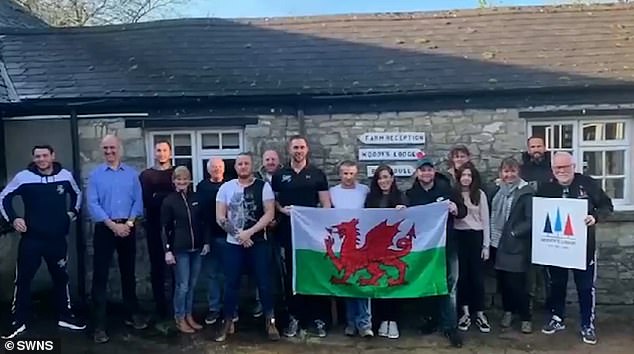 The site helps veterans and others by offering a peaceful retreat, as well as skills-based courses and qualifications 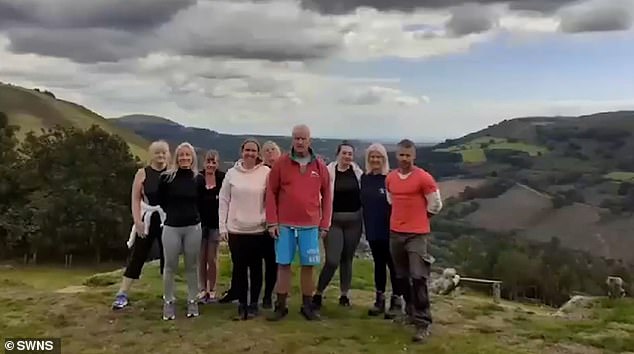 So far, the team have received over 2,500 visits to their fort.

Mike, who spent seven months in Afghanistan, said supporting troops and former soldiers is more important than ever.

He said: ‘We are in a mental health crisis.

‘With the Covid-19 lockdowns having a huge impact on many people’s deteriorating mental health, our work and services matter now more than ever before.

‘From being completely on my last legs, struggling to live and survive, rebuilding the cabin gave me small goals that I could achieve every day, on my own.

‘I had no phone, no TV, no radio. Spending so much time in nature, completely isolated away from outside pressures allowed me to find myself again. So, as the cabin grew, so did I.

‘When I started to rebuild the second cabin, lots of people and charities and started to take interest.

‘They allowed me to express my thoughts, and with a diverse team of passionate and understanding people, Endex was born.’

He said of his time in the Middle East: ‘I came back a different person.

‘Even though I went through starvation for long periods of time I’ve came away from two years of homelessness with a deep appreciation for the simple things that can often be taken for granted and an understanding of suffering that cant be taught in books. 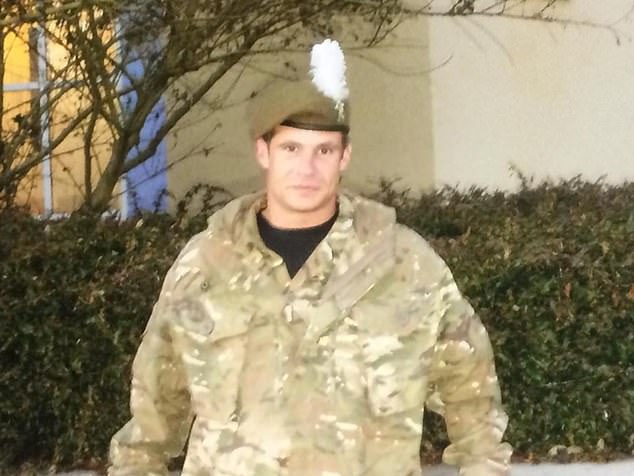 Mike, who is writing a book about his experiences, admits he suffered with suicidal thoughts after serving in the Army 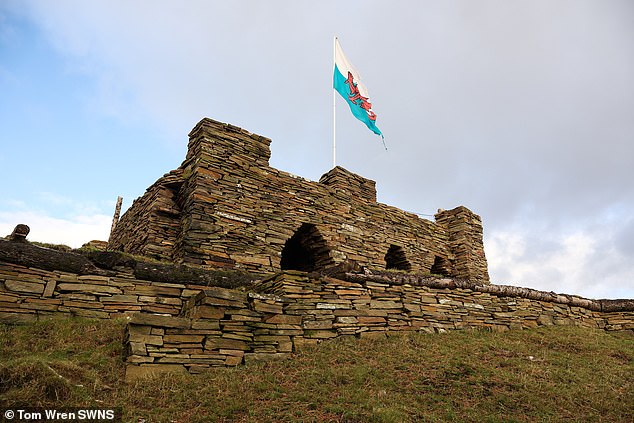 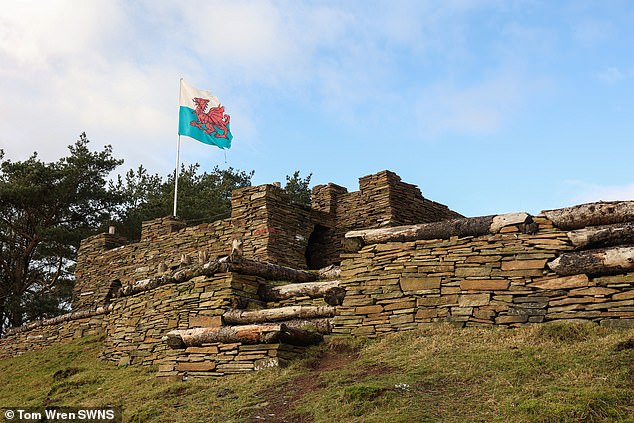 ‘I found employment, started private mental health treatment, and began to understand myself.

‘I started to make progress, reconnecting with friends and family I previously avoided and isolated myself from.

‘I began to find direction and purpose.’

Local children in the area have since become the unofficial gate-keepers of the castle.

Mike said: ‘I can see the castle from my bedroom window here in Wattsville, and I can see that I’m getting visitors every day now.

‘Kids in the area have taken this sense of ownership over it in the sense that they make sure people take their rubbish and everything’s left tidy, which is really nice.

‘Everybody has been very respectful of the premises, and there have been no damages or accidents or anything like that.’

It has now been kitted out with exercise stations, cooking facilities and a dry-stone walling centre for former military personnel to come and unwind.

Mike’s vision from the get go was to use the castle to offer a ‘therapeutic-based support service for veterans’.

It promotes ‘self-growth, development, worthiness, belief and positive stimulation to achieving goals, surrounded by nature with people willing to listen and understand, to give encouragement and options to better ones-self.’

He said: ‘The aim of the qualifications are that they may lead to employment in an outdoors environment with the work loads potentially reducing stress levels, making the role more sustainable and people suffering health conditions less likely to lose their way.

‘There was a significant increase in people visiting during lockdown, many of these being families.

‘I guess it has given people inspiration to create their own goals and engage with nature whilst having to hike a large hill to reach the Castle promoting personal fitness.’

After the cabin in the Sirhowy Valley in South Wales was knocked down Mike worked with environment agency Natural Resources Wales (NRW) for permission to rebuild it as a facility for military veterans. 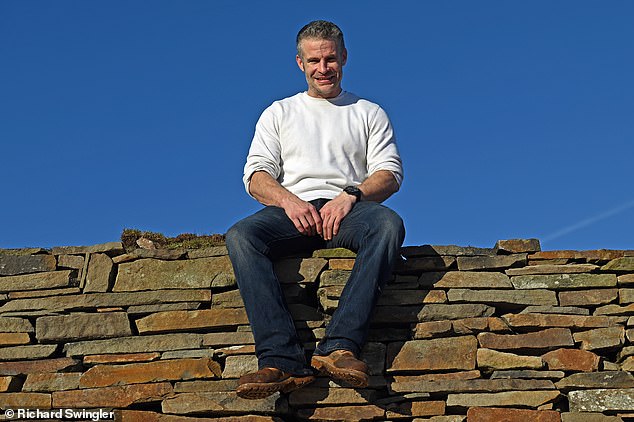 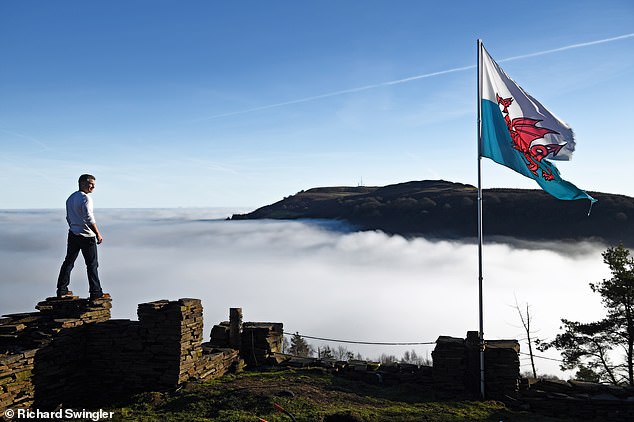 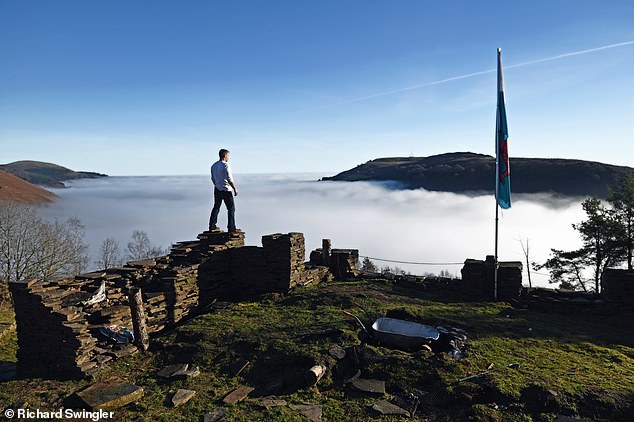 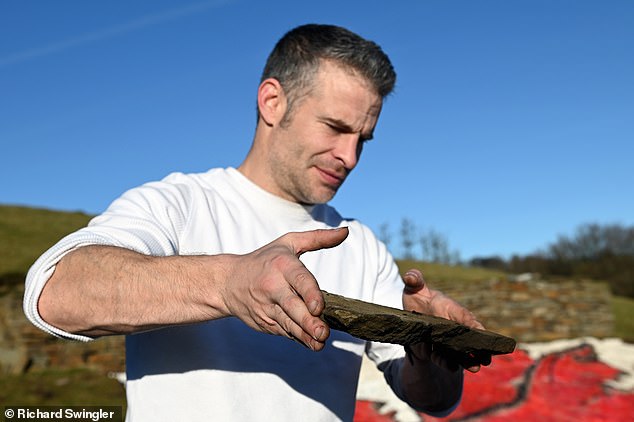 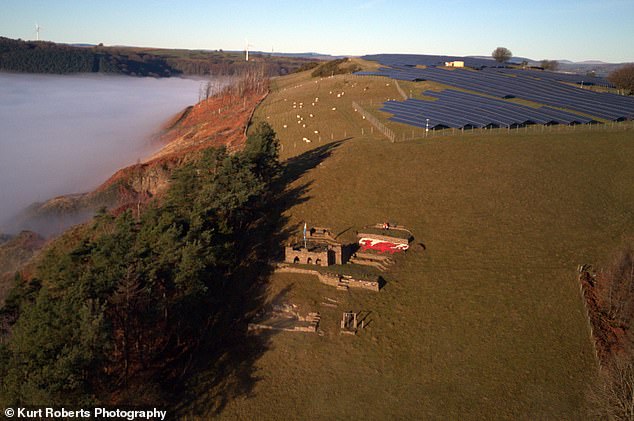 An aerial photo shows the castle basked in sunlight, just behind rows of solar panels 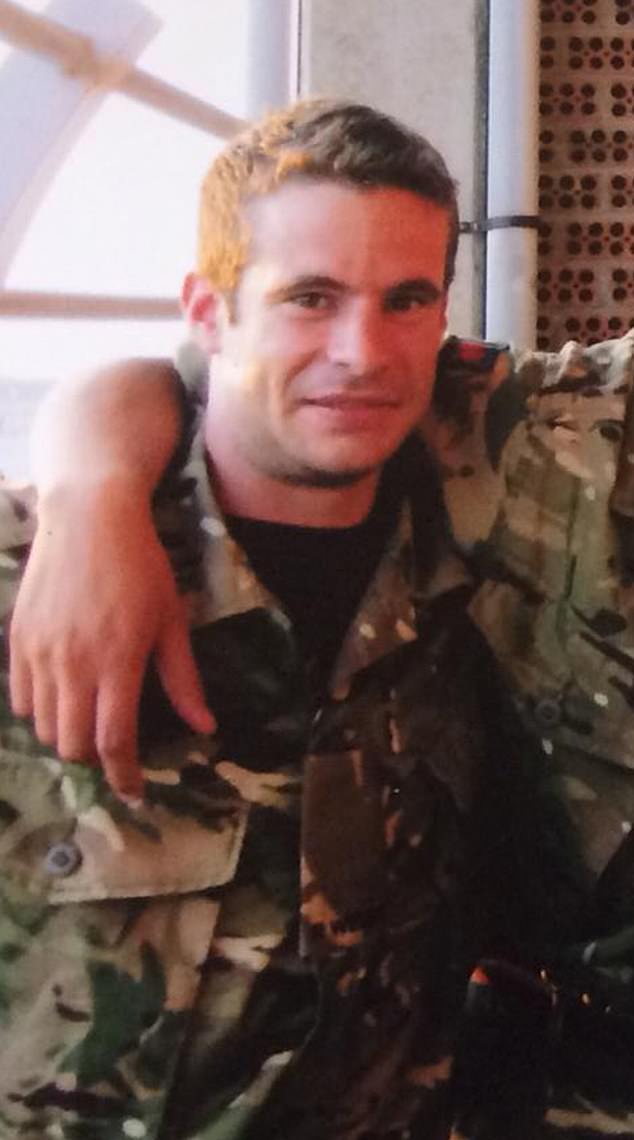 Mike’s vision from the get go was to use the castle to offer a ‘therapeutic-based support service for veterans’. 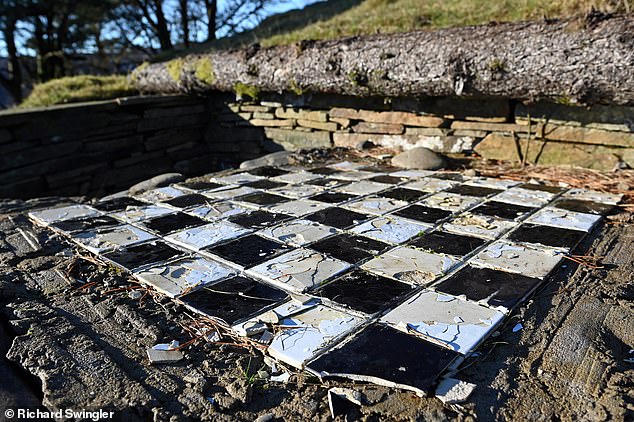 The castle features a chessboard for families or friends to enjoy

Mike said it would ‘be used as a safe place of work for people suffering from PTSD.’

He added: ‘Sometimes we struggle to be around normal people and it can be hard to cope – but when we’re with other veterans and other people in the same position its easier. ‘M

Mike said building the remote cabin helped him deal with his own demons, adding: ‘After leaving the army, I had some serious mental health issues and other problems. I struggled for a very, very long time and things weren’t working.

‘Things continued to go downhill so I ended up going up the mountain and started building.

‘The cabin started as a shelter but turned into something really special. It was healing me. It gave me cover from the elements, focus, and a sense of accomplishment whilst appreciating the landscape.’

Mike is currently writing a book that will reflect upon his experiences.