Pentagon officials in the US have warned that the RAF’s new £100m F-35 fighter jets can only fly at supersonic speeds for short bursts, or the stealth coating will ‘blister’.

The jets, which have also been bought by the US Navy and Marine Corps, are at risk of ‘structural damage’ when hitting their top speeds of around 1,200mph, potentially hindering their ability to intercept other planes, according to a report by the US Department of Defense.

Other ‘serious’ issues found in testing include spikes in cockpit pressure that can give pilots sinus pain, the loss of control on certain manoeuvres, and a system error causing the plane to erroneously report battery problems in cold conditions. 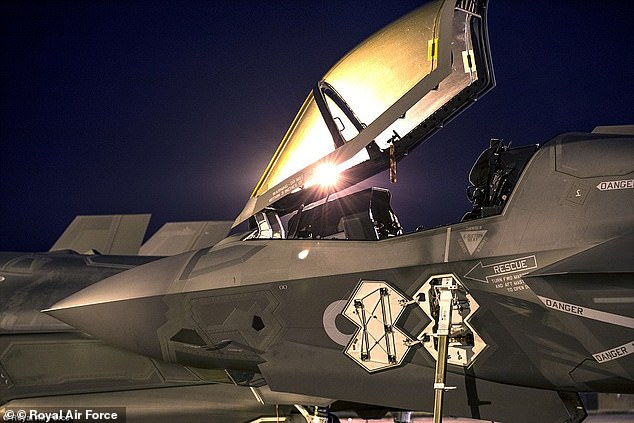 The fighters also experienced problems with the sea-search mode on radars and in carrying out vertical landings during hot weather, according to documents obtained by Defense News.

But the problems were described as ‘teething issues’ by a UK defence source.

Deficiencies with the stealth coating, which makes planes invisible to radar by absorbing radio waves, were uncovered following tests in 2011 when an F-35B and F-35C flew at speeds between 997 and 1074mph.

A post-flight inspection found ‘bubbling [and] blistering’ on the surface of one of the jets, prompting Lockheed Martin to rectify the problem by introducing a new radar-invisible material.

MailOnline understands the issue has only affected four of the UK’s 17 jets, which are currently based at RAF Akrotiri in Cyprus, where testing is taking place.

During the British trials the F-35s have not been tested to the same extreme limits as in the US, so not all of the same issues have been experienced.

Britain plans to eventually buy 138 F-35s as part of a massive £9.1billion deal that has been plagued by problems. 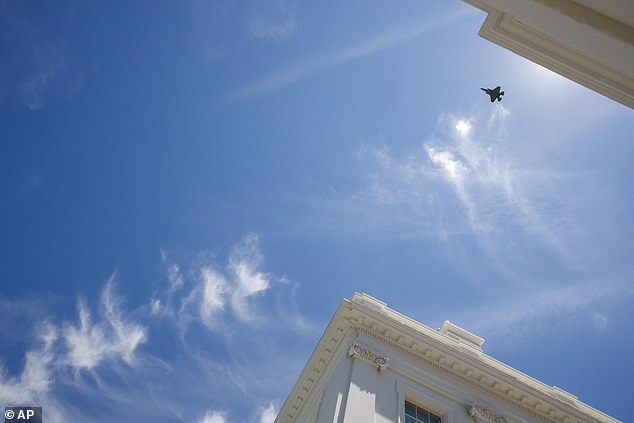 The jets, which have also been bought by the US Navy, are at risk of ‘structural damage’ when hitting their top speeds of around 1,200mph. Pictured: An F-35 over the White House yesterday

A Japanese F-35A jet crashed in the Pacific Ocean during a training mission in April, six months after an American F-35B went down in South Carolina.

F-35s are being subjected to rigorous testing in the US, where the number of the most serious mechanical problems has been cut from 111 at the start of 2018 to 13 in October – of which nine affect the variety the UK owns.

Britain’s jets are still expected to be operational at the end of the year despite the defects.

A Ministry of Defence spokesman said: ‘Our jets have always met the strict safety requirements set by both US and UK military safety authorities.

‘Safety is very closely managed within the F35 programme and we are working with the Joint Programme Office to ensure any issues are addressed as they arise.’

A spokesman for Lockheed Martin said: ‘These issues are important to address, and each is well understood, resolved or on a path to resolution.

‘We’ve worked collaboratively with our customers, and we are fully confident in the F-35’s performance and the solutions in place to address each of the items identified.’

– Lockheed Martin, who built the jet, describes its stealth capabilities as ‘unprecedented’. Its airframe design, advanced materials and other features make it ‘virtually undetectable to enemy radar’. 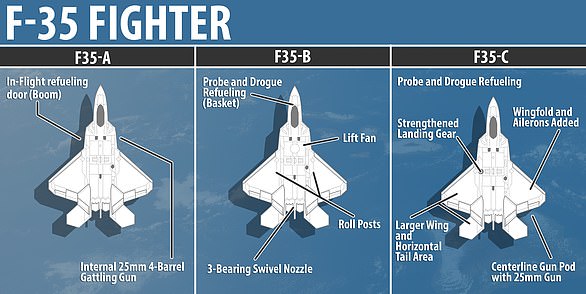 There are three different varieties of the F35, which each have separate features, as show above

– There are six distributed aperture system sensors around the jet – two underneath, two on top of the aircraft and one either side of the nose. These infrared cameras feed real-time information and images into the pilot’s helmet, allowing them to see through the airframe.

– All variants of the jets are mainly constructed on Lockheed Martin’s mile-long production line in Fort Worth, Texas.

– The F-35 can launch from land, and will take off from HMS Queen Elizabeth via the skip jump ramp, which has been designed to optimise the launch.

– The jet is capable of two types of ship landing – vertically on to the deck, and also through the shipborne rolling vertical landing, which using forward air speed, allows the aircraft to bring back several thousand pounds of extra weight to the ship.