Last week, a police dog was killed after the force tracked four suspects who were wanted in connection with the killing of Lieutenant Colonel Ndawonde, the acting station commander at Ndwedwe South African Police Service. He was shot last month. Two suspects jumped out of a vehicle and fled into a sugarcane field. The other two crashed the vehicle and were detained.

Police dog Simba, 12, and his handler, Captain Reeno Dayaram, were part of the group that went in search of the suspects.

While Simba located one of the men and tackled him, the suspect retaliated and shot him in the head.

Another dog, Shaka, was also killed and a third, Duke, was shot in the head. Duke was airlifted to the Hilton Veterinary Hospital for emergency surgery and is recovering. 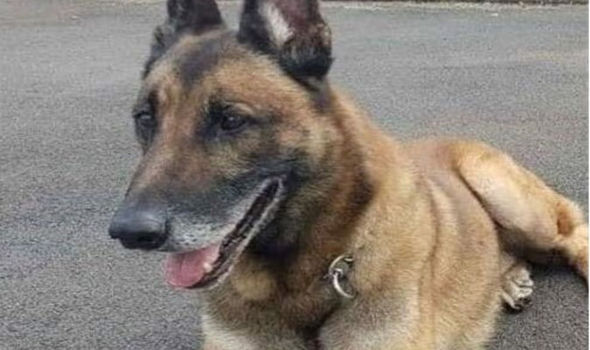 Dayaram, who was been a policeman for 12 years, said Simba’s death was not in vain. He told Independent Online: “He died a hero. Simba was one of the best dogs in our unit and the country.

“He was a dog that every unit looked for whenever they went out for big cases. Simba was a hard worker and he lived to catch criminals.”

Simba was just nine-months-old when he first met Dayaram, and they hit it off immediately.

Dayaram added: “We bonded well and when I took him home to my family, he bonded well with them as well, particularly with my second daughter, Trizae. She was just a toddler at the time.

“Simba had the ability to switch into work mode whenever we left home each morning and change to a playful baby the moment we entered the yard after work. My wife told me that I should learn to be like him because I always focused on work.”

He said he and his family were devastated by Simba’s passing.

He said Simba was given a number of bravery and service awards during his career as a police dog: “For six years in a row, he was given the best working dog award by the police.

“He was also honoured with an excellence award by the provincial commissioner for cracking a big case in Richmond.”

Dayaram, who is waiting for his next canine partner, said Simba would be cremated. He said he would keep Simba’s ashes.