Heartbroken family pay tribute to helicopter pilot, 66, killed alongside a passenger after his chopper plunged into a field near his North Yorkshire home ‘where he was housing Ukrainian family’

Devastated family members have paid tribute to a helicopter pilot who died after his chopper crashed into a field on the edge of the Yorkshire Dales.

Ian MacDonald, 66, tried to land his 2016 Guimbal Cabri G2 near his home when the tragedy occurred. Mr MacDonald’s passenger, understood to be a German national, was also killed.

North Yorkshire Police confirmed the deaths after emergency services scrambled to Burton-in-Lonsdale, a village of around 600 people. No one else is believed to have been on board the aircraft.

Video of the aftermath showed at least four fire trucks and an air ambulance at the scene, close to Bentham Road.  The helicopter is understood to have come down at around midday.

Locals from the nearby Rivers Edge Holiday Home & Lodge Park caravan site, in Ingleton, said they were left in ‘shock’ following the crash on Monday.

Her mother Audrey wrote: ‘With great sadness my daughter Julia’s partner Ian has been killed in a helicopter accident on Monday June 20 – love from all of us xx.’ 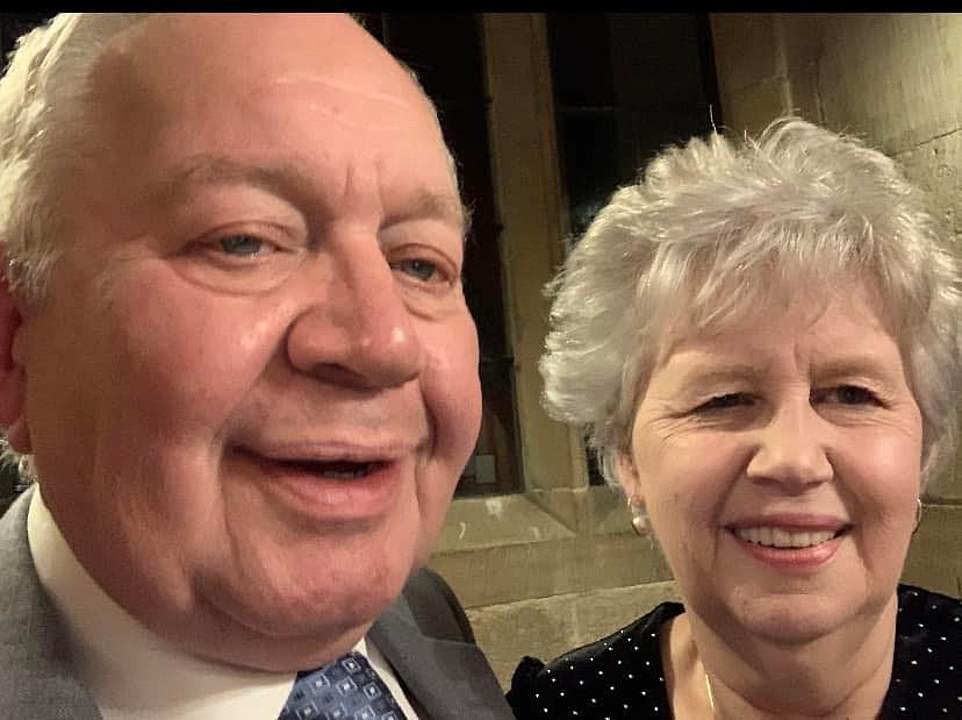 66-year-old Ian MacDonald (pictured with his partner Julia Smith) tried to land his 2016 Guimbal Cabri G2 near his home on the edge of the Yorkshire Dales when the tragedy occurred, killing both him and a passenger, believed to be of German nationality 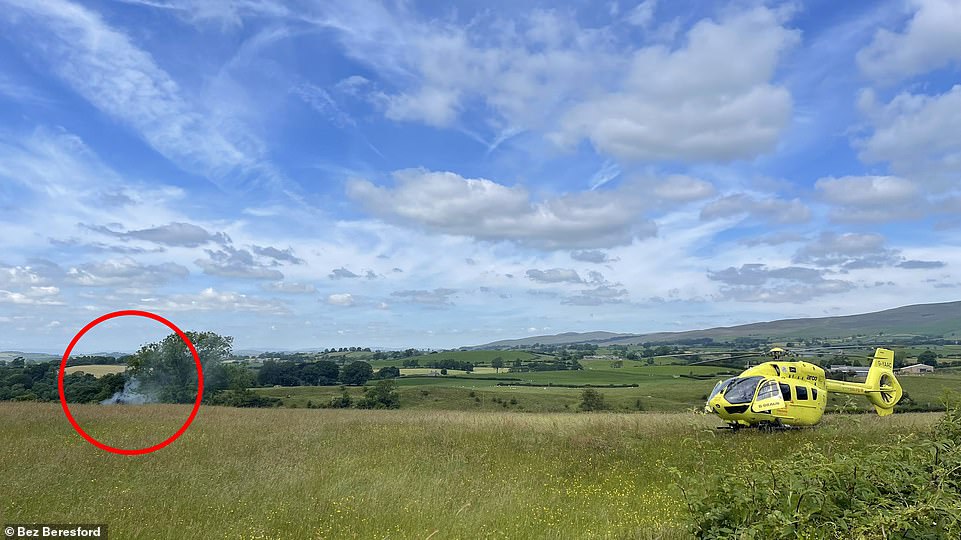 Pilot Ian MacDonald, 66, and his passenger died after their helicopter crashed into a field on the edge of the Yorkshire Dales today. Pictured: Emergency services were scrambled to Burton-in-Lonsdale in North Yorkshire today following the helicopter crash (circled) 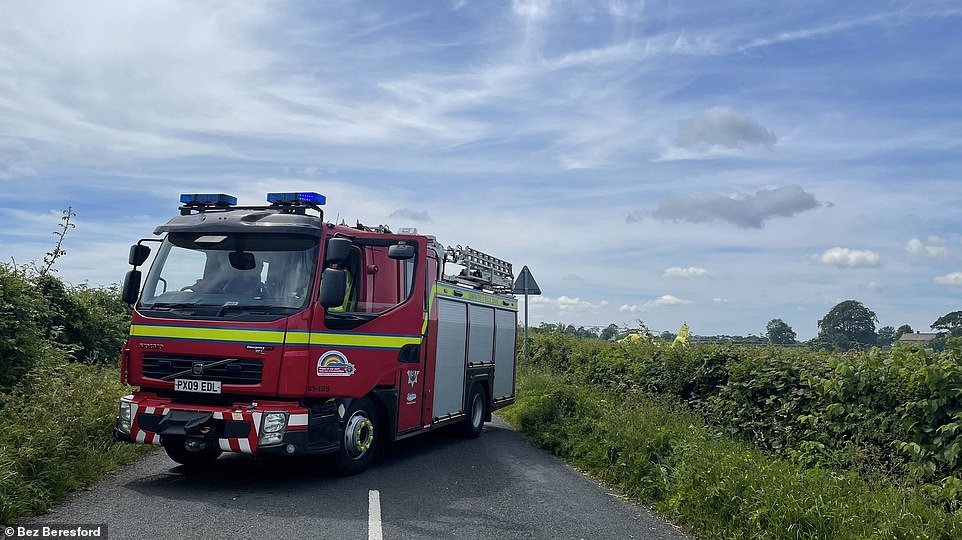 Emergency services were scrambled to Burton-in-Lonsdale in North Yorkshire shortly before midday on Monday. Video of the aftermath showed at least four fire trucks and an air ambulance at the scene, close to Bentham Road

A neighbour said: ‘He crashed whilst landing it. It’s a manoeuvre he has done many, many times.

‘He is a lovely man. He is currently housing a Ukrainian family. I don’t know what they will do now.’

North Yorkshire Police added: ‘A full investigation is under way into the cause of a helicopter crash near Ingleton.

‘The incident happened shortly before midday in a field off Bentham Road near Burton in Lonsdale.

‘Two people were sadly killed as a result of the crash. Their families are being supported by specially trained officers.

‘There was not believed to be anyone else on board the helicopter.

‘There is a full road closure at the A65 and at the junction of Bentham Moor Road. People are urged to continue to avoid the area. We thank local residents for their patience and co-operation.’

Burton in Lonsdale is a farming area close to the border with Lancashire and Cumbria.

One of the Rivers Edge Holiday Home & Lodge Park staff members confirmed that people from the site had ‘assisted’ with the incident but would not give any further details.

She said: ‘There was a crash. People from the site went over and assisted. The manager is a bit in shock.’

Witness Bez Beresford, who took photographs and recorded video of the scene today, said there were ‘dozens of emergency vehicles’ present in Burton-in-Lonsdale, which is near the border with Lancashire and Cumbria.

Ben Slinger, 35, the manager of a local fabrications business said: ‘The fire crew were searching up and down the fields, and there was a police helicopter with a thermal imaging camera.

‘It certainly looked like they were looking for somebody. We could see the fire brigade searching the fields.’ 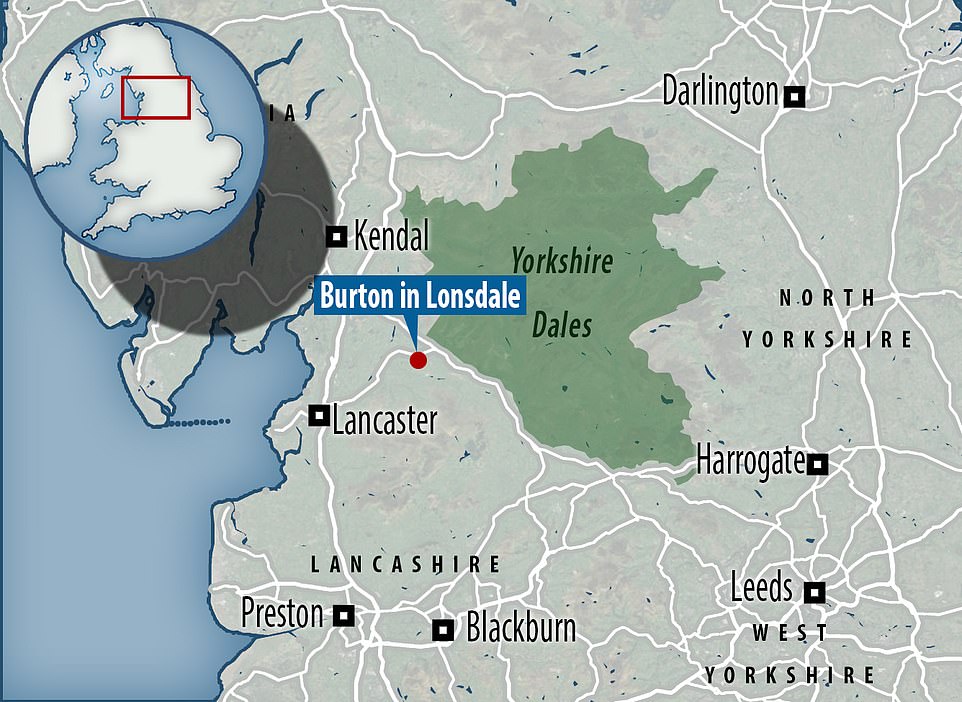 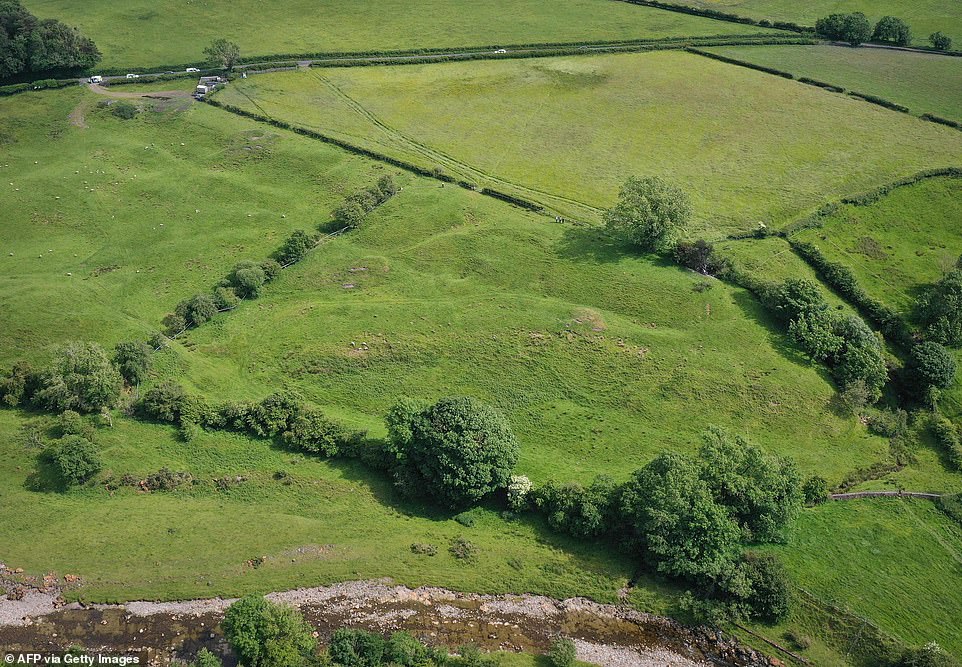 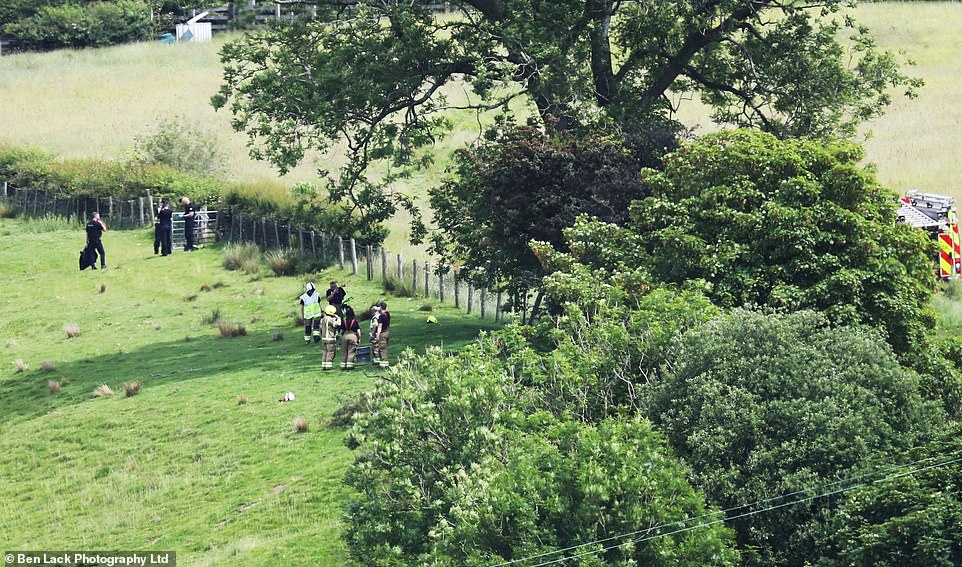 The Air Accidents Investigation Branch has also been informed about the crash. Pictured: The scene with firefighters and police walking around the area in the green fields as a fire truck is parked by a fence 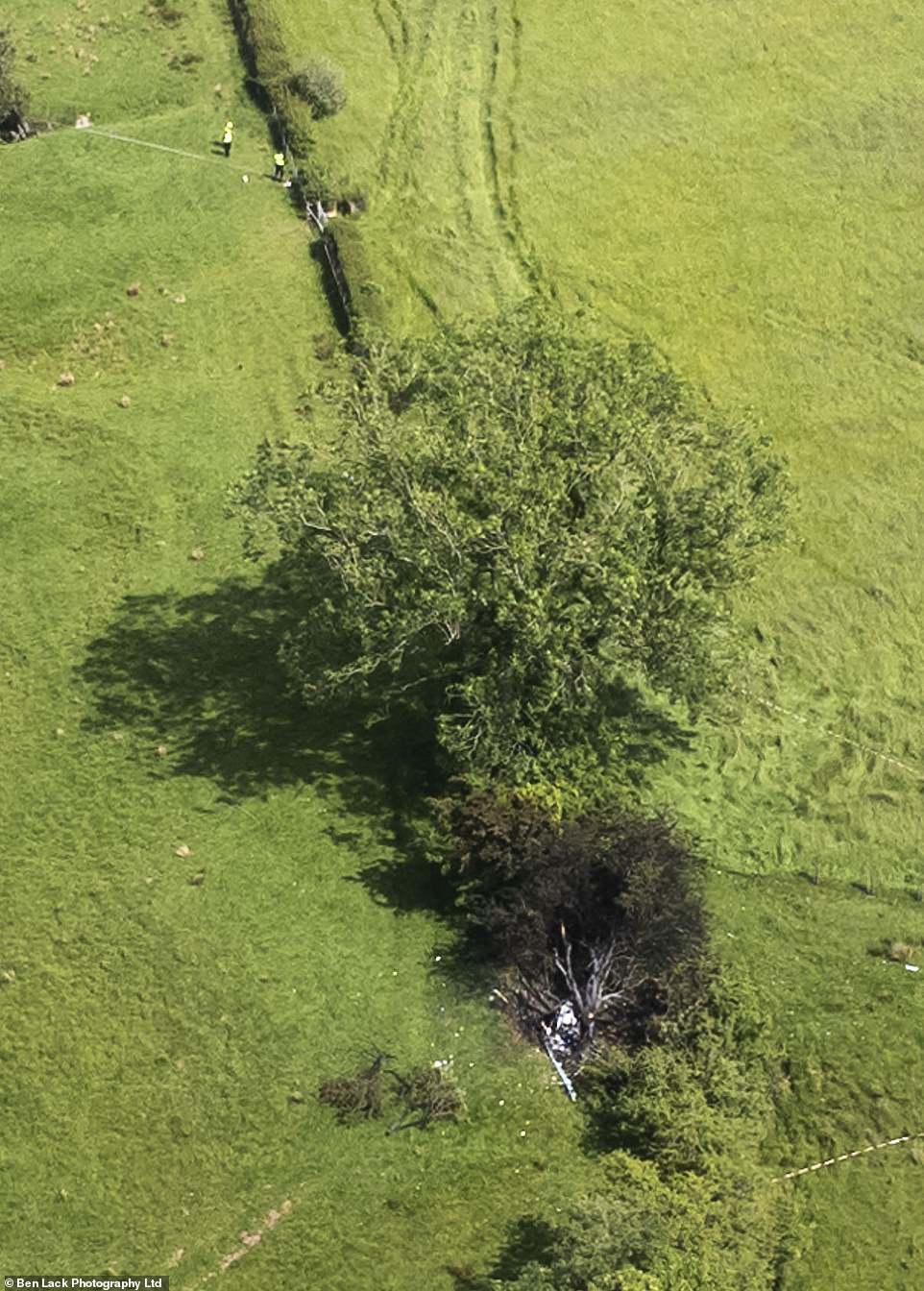 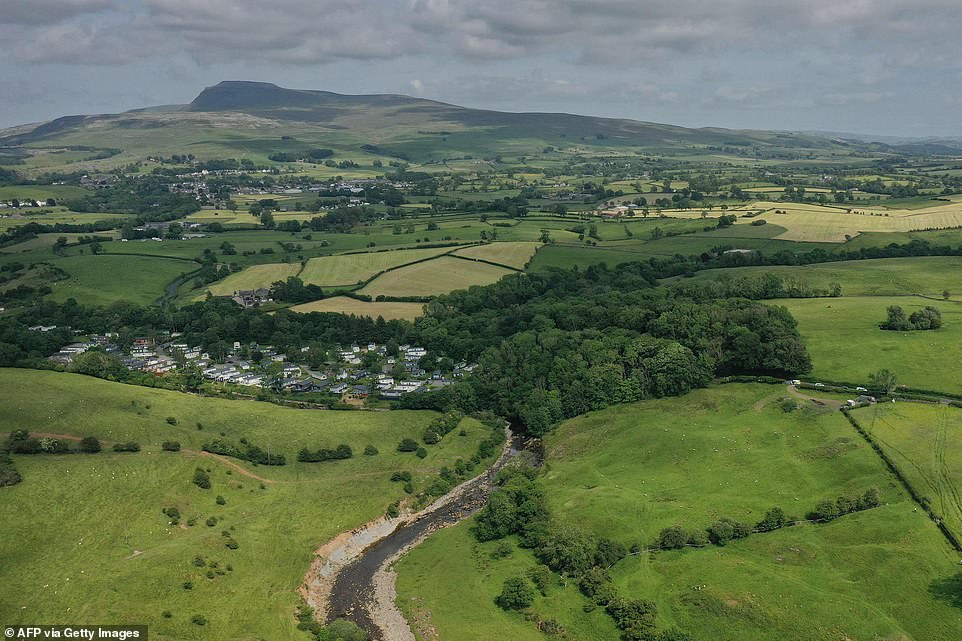 Mr Slinger said his attention was only drawn to the crash when an air ambulance arrived on scene after mid-day.

He said: ‘I didn’t hear anything. The first I heard was the ambulance. I then had a look round to see what was happening.

‘We don’t get many helicopters landing round us. I sort of know the person who farms the field. My first concern was something happening to him.

‘Then I found out it was a helicopter crash, which was a shock.’

One mother, who wished not to be named, said she went to pick her daughter up from nursery and saw the emergency services, but did not see or hear anything unusual at the time of the crash.

She said: ‘There was police and fire engines everywhere and I saw the air ambulance. I thought there might have been a car crash, I didn’t realise it was a helicopter. It’s shocking.’

A North Yorkshire Police spokesman said earlier today: ‘Emergency services are at the scene of an incident off Bentham Road near Burton-in-Lonsdale, where a helicopter has crashed into a field. The incident happened shortly before midday. People are strongly urged to avoid the area.’

It also confirmed this included an air ambulance but would not say the number of casualties.

A team from the Air Accidents Investigation Branch been informed about the crash and are on-route to the site.

A spokesperson for the AAIB said: ‘We have been notified of an accident near Burton in Lonsdale, North Yorkshire involving a light helicopter.

‘An investigation has been launched and a team of inspectors are travelling to the accident site to begin making enquiries.’