Some 52 dolphins have been slaughtered in the Faroe Islands less than two weeks after the killing of a record 1,428.

WARNING: This article contains graphic images some may find distressing.

The pilot whales were initially intended to be marked and released as part of a scientific research programme, but the islands’ Natural History Museum said it did not have enough staff to carry out the tagging.

Instead of releasing the dolphins back into the ocean, the whalers decided to slaughter them.

She told Sky News: “Apparently the last hunt and the criticism that came afterwards has not made them rethink their behaviour. It seems as if this was done in spite.

“Initially they did have a scientific research programme where they track pilot whales and keep track of them and see where they are, but because they did not have enough people to do the tagging they decided to kill them.

“They could have just driven them out to sea, they did not have to do this at all.” 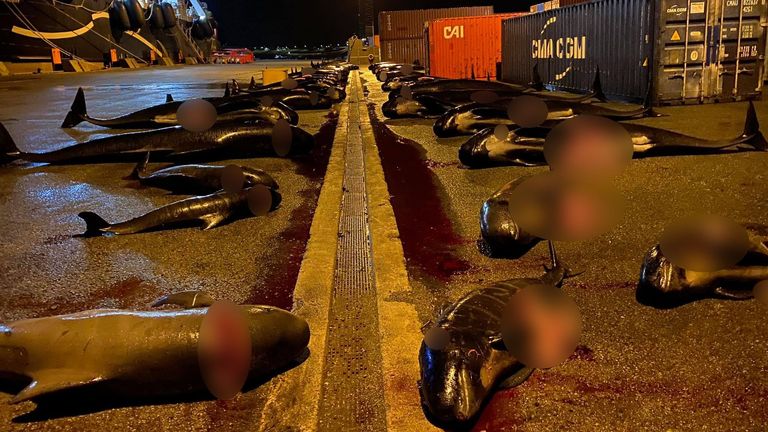 Sea Shepherd shared footage with Sky News that shows the bodies of the dolphins after they had been killed.

The slaughter took place on a beach that had recently been licensed for killing pilot whales after being unused for 40 years.

It comes after the group released graphic footage showing hundreds of dead animals lying on a beach during the killings on 19 September, while others were herded into shallow waters by boats and jet skis before being slaughtered.

The killings on Wednesday night took place less than 10km away from the beach where 1,428 Atlantic white-sided dolphins were killed.

The slaughter was part of a hunt called Grindadrap that involves the animals having their necks cut with knives or being killed with harpoons.

It has been a part of the island’s tradition since the ninth century, and the meat and blubber from the animals are shared within the community. 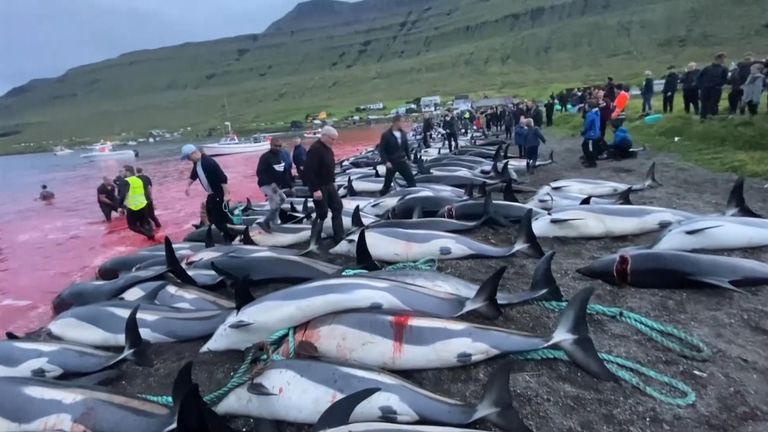 Ms Crast said the whalers had carried out the hunt “in spite of knowing the pressure that is on them from the international community”.

She said meat from the hunt would be distributed between those who participated and then offered out to the local community, then sold to restaurants and supermarkets.

The fresh slaughter comes after the Faroe Islands government said it would review regulations governing the traditional hunts after the killing of the “super pod” earlier this month.

It said that catch was a record, as typically around 250 dolphins and 600 pilot whales are caught each year in Faroese waters.

“We take this matter very seriously. Although these hunts are considered sustainable, we will be looking closely at the dolphin hunts, and what part they should play in Faroese society,” Prime Minister Bardur a Steig Nielsen said last Saturday.