Mayors in Melbourne’s eastern and south-eastern suburbs fear new Suburban Rail Loop stations will be designed like a “maze”, lacking seamless connections to nearby train stations, universities and shopping centres.

Early designs for six stations along a 26-kilometre tunnel between Cheltenham and Box Hill show several key stops — Monash, Cheltenham and Burwood — will be built opposite a major activity hub or train station, on the other side of a major highway or road. 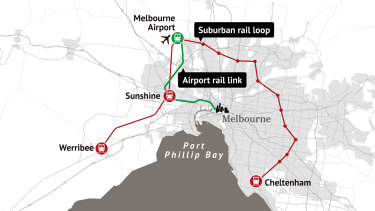 There are no clear signs that direct pedestrian passageways would be built, meaning commuters may be forced to spill out onto major roads to reach key destinations, raising safety fears and concerns about poor station design.

Months before the 2018 election, Premier Daniel Andrews unveiled the Suburban Rail Loop – an underground line through Melbourne’s middle suburbs, connecting Cheltenham in the south-east to Werribee in Melbourne’s west in a loop around the city. It is the largest public transport project announced by a Victorian premier in recent history.

The vision was to build a highly interconnected rail network modelled on those in other world capitals. Loop stops would have easy interchanges with existing stations, which would be upgraded or rebuilt to connect to the new line.

Before the announcement, the huge project was kept so secret that the delivery agency responsible for it, the state’s top transport bureaucrat and most of the government’s ministers knew nothing about it, The Age has revealed.

Gag orders were issued and the project was codenamed Operation Halo, with consultants commissioned to do the project’s preliminary planning work over a six-month period on a part-time basis. Questions have been raised about whether the financial and transport planning cases had been made for the loop when it was announced.

The stations’ final designs are far from complete, with the project’s investment case being released in coming weeks and the environmental effects statement by the end of the year.

But Whitehorse mayor Andrew Munroe has warned the government may already be walking away from the promise to create a “seamless interchange” with existing train platforms at Box Hill. He said this pledge contradicted advice he received from government officials, who said an underground pedestrian connection between the loop and existing train platforms was out of scope.

“This is considered to be a significant deficiency in the [rail loop] scope,” Cr Munroe warned in a letter to Transport Infrastructure Minister Jacinta Allan in April.

“This unco-ordinated approach to public transport infrastructure will result in passengers needing to navigate through a maze of ticketing entrances/exits, escalators, shopping areas and restaurant precincts to get from one train service to the other.”

The mayor also said Box Hill’s “dysfunctional and disconnected” bus terminal required an urgent overhaul, which should be tied into the rail loop project.

Early designs of the new Burwood station – to be built at the edge of the six-lane Burwood Highway across the road from Deakin University – also concern Cr Munroe, who does not want large numbers of students crossing the road from the station to the university campus.

The council is lobbying for an underpass and the university is calling for a grade-separated crossing above or beyond the highway.

Another mayor has weighed in on the government’s early designs for Cheltenham station, which will be separated from the Westfield Southland shopping centre and Southland station by a main road, Bay Road.

Current plans suggest the station will have only “a single station entry, oriented towards Bay Road”, which Kingston mayor Steve Staikos said was not good enough.

Without more entrances, commuters exiting the loop station would face a long walk to the nearby bus and train stations, Cr Staikos warned.

“We would like to see the design of the entrances be integrated with the existing transport infrastructure, so if you’re on the Frankston line or taking a bus to Westfield Southland you’ll be able to easily move to the [loop] within minutes.”

Questions also loom over the location of Monash station, to be built at the far north edge of the university campus over Normanby Road.

Transport expert Graham Currie, who is based at the university, said he believed the station should be “right in the middle of the campus” and questioned why it was to be built in an industrial precinct next to the Monash Waste Transfer Station – a major recycling facility.

But he noted the project was preparing for the next 20 to 30 years and the campus may expand and change, with the station triggering more development nearby.

Monash University wants an entrance to be built south of Normanby Road, to ensure students are not crossing the busy road.

A government spokeswoman said the station designs were still being planned and further details would be released and assessed as part of the environmental effects statement process.

“Passenger experience is a priority consideration in the design of Suburban Rail Loop stations and that includes creating convenient and efficient interchanges with existing stations.

“Design development work continues on the new … stations and their configuration to ensure they best serve the needs of local communities and passengers.”