Residents exasperated by speeding motorists in their area have set up a fake speed camera in a bird box to stop drivers breaking the 30mph limit.

Lizzy Coombes, 56, and Cluny Macpherson, 60, living on Meanwood Road in Leeds, West Yorkshire, said they hoped the fake camera would start a ‘conversation’ about how people drive on their busy street.

But instead of catching speeding motorists, it is actually a nesting box for blue tits and was designed for free by a local men’s group.

Artist Lizzie – who described the fake speed camera as both ‘gently radical’ and ‘something quite playful’ – insisted that they hadn’t broken the law by putting it up. 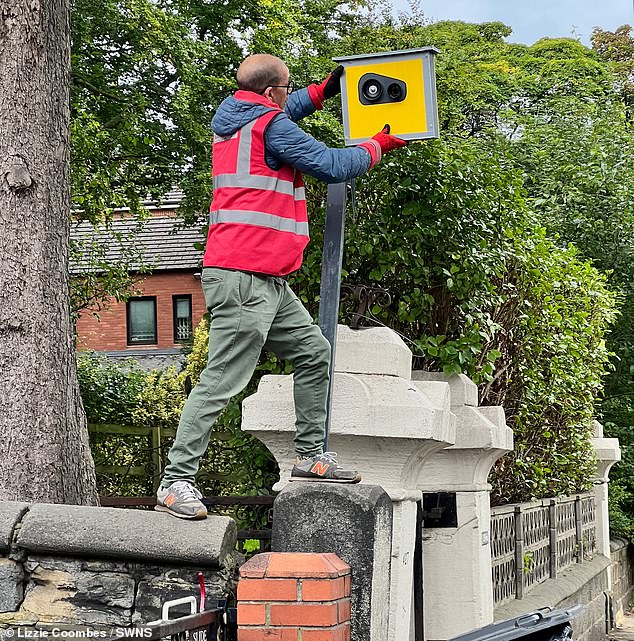 The fake speed camera is actually a birdbox designed to stop speeding motorists go above the 30mph speed limit in the residential road in Leeds, West Yorkshire

She said: ‘It’s something quite playful and just a little intervention.

‘It’s not meant to completely and utterly convince people that it’s a speed camera but to start the conversation.

‘If it changes or makes one per cent of people think differently, well that’s better than none.

‘And in terms of the legalities of it, we haven’t breached anything, it just happens to look a little bit like a speed camera.’

Lizzie said the fake camera was part of a project that residents on Meanwood Road in Leeds, hoped would change the atmosphere of their neighbourhood.

She said: ‘We started a project, it’s called The Meanwood Road Project, and we’re looking to see if we can change the feel of the road. 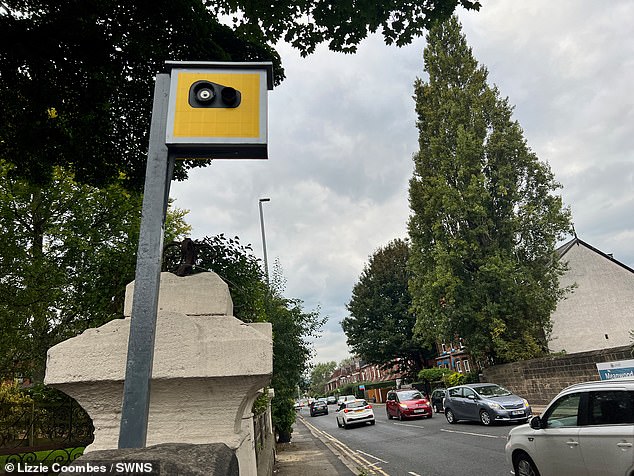 The fake speed camera was designed by the Men’s Shed, a group that make birdboxes. Resident Lizzie Coombes asked them to make it to resemble a speed camera

‘It’s 30mph yet it feels a much faster road. It’s wide and we have narrow pavements, so there’s a sense that this is a place where people can speed through.

‘Part of the project was looking at how you bring communities together rather than pitching one against the other – say residents against drivers.

‘We came across this voluntary group called the Men’s Shed. They make bird boxes, and I asked them if they could make a bird box that looked like a speed camera.’

Former civil servant Cluny, who has the fake camera in his garden, said he hoped it might help his disabled cross the road more easily by deterring boy racers.

He said: ‘My daughter is disabled and can’t walk very well. We take her around the local area, but the only place we can go involves crossing the road.

‘She walks really slowly, and we have to make sure there’s no traffic for 100m in either direction. 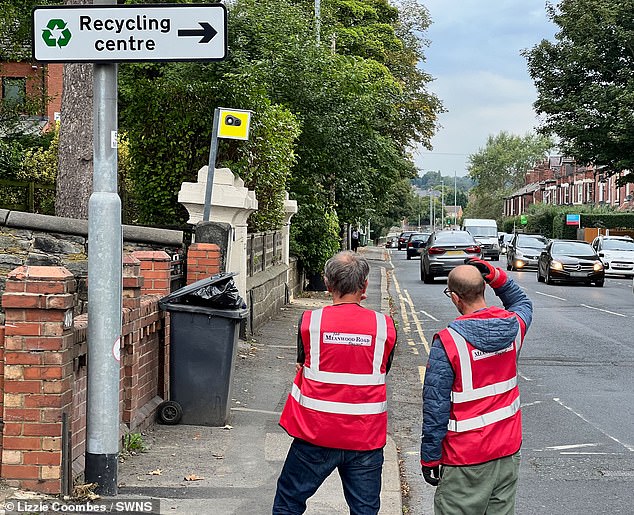 ‘In the early evening, when the road isn’t clogged up with commuter traffic and it looks like a long straight road, people do seem like they’re driving more than the 30mph limit.’

Lizzie, who said she had been woken up by loud engines on the road in the past, wasn’t sure how effective the fake camera had been at halting fast drivers.

But she said it had stirred comments on local Facebook groups, which said was helping to promote further discussion on the issue.

She said: ‘It’s difficult to calculate whether it’s had an effect. What is has done is started conversations on local Facebook groups, which are really interesting to read.

‘You’ll have people saying ‘Watch out, there’s a speed camera’ and then someone will say, ‘It’s not, it’s a bird box.’

She added: ‘It’s not illegal because it’s in a person’s garden, and doesn’t actually say it’s a speed camera.

‘And if you go up to it on the sign, it tells you it’s part of our Meanwood Road Project.’

Cluny said he hoped the box would attract blue tits and grey tits in the future but said no wildlife had taken up the chance to live in it yet.

He said: ‘I have put bits of bread on the top to try and get them to have a look. It’s possible that we would get birds nesting in there, but we will see.’