Washington: The former head of the US government's cybersecurity agency sued Donald Trump's campaign and one of the president's lawyers on Tuesday, local time, for defamation after the lawyer suggested in a television interview he should be shot.

Christopher Krebs, who was fired by Trump last month, also accused the lawyer Joseph diGenova, the campaign, and the conservative TV station Newsmax of engaging in a "pernicious conspiracy" to defame and injure Republicans who spoke out against baseless claims of election fraud. 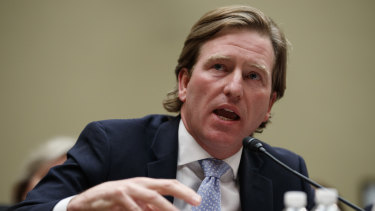 Krebs, a Republican, said he had been "bombarded" with death threats, harassment and being branded a traitor since a November 30 broadcast where diGenova, a regular on-air Newsmax contributor, referred to him as a "class A moron" who "should be drawn and quartered. Taken out at dawn and shot."

The lawsuit also accuses the Trump campaign and diGenova of intentional infliction of emotional distress.

Neither the campaign nor diGenova immediately responded to requests for comment.

In a statement, Newsmax said that while diGenova made "inappropriate" comments, Krebs' lawsuit threatened free speech and "endangers all media organisations that seek an open discourse of ideas and news."

Trump and many of his supporters have made unsubstantiated claims of widespread fraud in an effort to overturn the victory of President-elect Joe Biden, a Democrat, in last month's election.

The president fired Krebs as head of the Cybersecurity and Critical Infrastructure Agency on November 17, accusing him on Twitter of making a "highly inaccurate" statement that the election was secure.

DiGenova made his comments on Newsmax's The Howie Carr Show, after the host referred to Krebs' recent appearance on CBS' 60 Minutes.

The lawsuit seeks unspecified damages and for Newsmax to remove video of diGenova's comments.