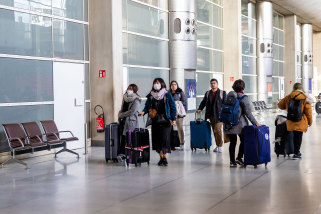 Travellers arriving at Charles de Gaulle Airport in Paris. The man who died in Paris from coronavirus on Friday was an elderly Chinese tourist. Credit:Bloomberg

Outside mainland China, there have been about 500 cases in some 24 countries and territories.

Until the death in France, there had been three deaths outside China, with one in Japan, one in Hong Kong and one in the Philippines.