Florida data researcher, who was fired from health department, shares video of officers searching her home with guns drawn. Police say the department of health filed a complaint. 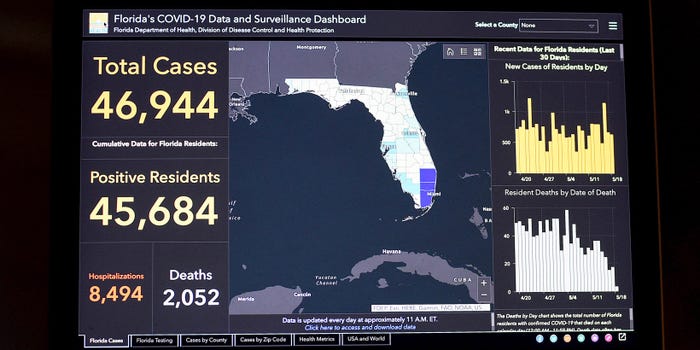 Florida data researcher Rebekah Jones shared a video on Twitter of what she said were Florida state police officers entering and searching her house with guns drawn.

Jones, a former Florida health department employee, developed the state's coronavirus dashboard. She was fired in May and alleges it was because she refused to "manually change data to drum up support for the plan to reopen." At the time, DeSantis' office claimed that Jones was fired because she made executive decisions to modify the Department's COVID-19 dashboard without input or approval from scientists or her supervisors.

Alongside the video, posted around 5 p.m. local time, Jones tweeted, "There will be no update today. At 8:30 a.m. this morning, state police came into my house and took all my hardware and tech. They were serving a warrant on my computer after DOH filed a complaint. They pointed a gun in my face.  They pointed guns at my kids."

In the video, officers walk into her home and shout for her husband to come downstairs as they tell Jones to wait outside. Officers can be seen with their guns drawn as they enter and search, pointing them in the direction of Jones and her family.

Jones also alleged that her hardware and tech used for the dashboard were seized, saying on Twitter, "They took my phone and the computer I use every day to post the case numbers in Florida, and school cases for the entire country. They took evidence of corruption at the state level. They claimed it was about a security breach."

Jones did not respond to Insider's request for comment.

In a statement sent to Insider, Florida Department of Law Enforcement spokeswoman Gretl Plessinger said that the FDLE issued a search warrant after allegations that an unauthorized message was sent to members of Florida's State Emergency Response Team. The search warrant, also shared with Insider, was issued on December 3.

Florida's State Emergency Response Team coordinates Florida's public health messaging and response, and the message sent to them allegedly said "speak up before another 17,000 people are dead. You know this is wrong. You don't have to be a part of this. Be a hero. Speak out before it's too late."

In the statement, Plessinger said that the search warrant was issued for Jones' Tallahassee home, and FDLE began an investigation on November 10, 2020 "after receiving a complaint from the Department of Health regarding unauthorized access to a Department of Health messaging system, which is part of an emergency alert system, to be used for emergencies only. Agents believe someone at the residence on Centerville Court illegally accessed the system."

Plessinger added, "When agents arrived, they knocked on the door and called Ms. Jones in an attempt to minimize disruption to the family. Ms. Jones refused to come to the door for 20 minutes and hung-up on agents. After several attempts and verbal notifications that law enforcement officers were there to serve a legal search warrant, Ms. Jones eventually came to the door and allowed agents to enter. Ms. Jones's family was upstairs when agents made entry into the home."

The Florida Department of Health referred to the ongoing FDLE investigation. The office of Gov. Ron DeSantis did not immediately respond to a request for comment.