A woman driving in a car with her 1-year-old grandchild was struck by a train Monday morning in Pompano Beach, according to news reports.

The train was heading south as the grandmother drove onto the tracks at about 10:15 a.m. near Northeast Third Street and North Flagler Avenue, Local10.com reported. 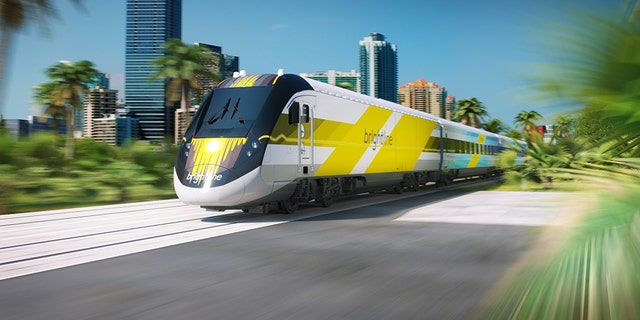 A woman and her 1-year-old grandchild were struck by a Brightline train Monday morning.<u>CLICK HERE TO GET THE FOX NEWS APP</u>
(Brightline)

The woman frantically tried to get off the tracks before the Brightline train smashed into her.

The grandmother and her grandchild were taken to Broward Health Medical Center for minor injuries. The woman broke her collarbone, according to WSVN 7News. The airbags deployed and the rear of the vehicle was completely crushed, photos show.

It was the first day that the private train service had resumed since suspending operations in March 2020 due to the coronavirus pandemic, and Brightline’s president and other company officials were onboard, WSVN 7News reported.

The train service, which was launched in 2017, runs every hour between Miami and West Palm Beach.