Foley in the dark on ADF arrivals – then flight cancelled anyway

Plans to bring more Australian Defence Force personnel to Melbourne to help with Victoria’s hotel quarantine program were derailed at the 11th-hour on Sunday after Health Minister Martin Foley said he had not been briefed on the arrival of military support.

The first 64 of the extra personnel were due to arrive in Melbourne on Sunday night but the RAAF C130 aircraft scheduled to land at Melbourne Jet Port at 7.40pm was cancelled for “operational reasons”, the ADF said. 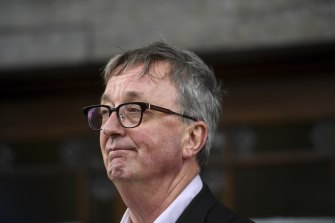 Following the inquiry into the bungled hotel quarantine scheme that led to Victoria’s second wave of the coronavirus pandemic the hotel quarantine program is now the responsibility of Emergency Services Minister Lisa Neville. On Sunday evening, a spokesperson for Ms Neville welcomed the ADF’s deployment of more troops but was critical of the limited roles they would play.

“We are disappointed the resources will not be assisting with floor monitoring work in the non-COVID complex care hotel,” the spokesperson said.

“This deployment will support the increase in Victoria’s cap of international travellers but it will not assist in reducing the impact of hotel quarantine on use of Victoria Police resources, as the ADF have again declined requests to assist with floor monitoring in hotel quarantine. ”

The ADF had committed 220 additional troops over the coming weeks to help with Victoria’s expanded quarantine scheme after the Andrews government requested military support from the Commonwealth late last month. About 200 troops are currently working across 12 Victorian quarantine hotels. 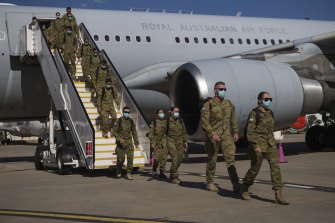 Announcing a planned increase in the numbers of returned travellers last month, Ms Neville said that it might be possible to increase its cap if the ADF provided more support. “I would say it would certainly take the pressure off Victoria Police if the ADF played some more of those roles, but we’re working on the basis that they said no previously.”

The use of defence personnel was a major flashpoint last year during Victoria’s deadly second wave of the coronavirus pandemic.

In late June, as Victoria was on the brink of the pandemic’s deadly second wave, Premier Daniel Andrews said the military would not be required to assist with the hotel quarantine program. The following day, the government said up to 1000 military personnel would be called in to assist, but by that evening the state changed its position again, and downsized its request for assistance.

In late January, a federal Defence spokesman said Victoria had initiated preliminary discussions over increasing ADF numbers in the revamped quarantine hotel program. However, the spokesman intimated that the ADF would not be able to supplement police officers because the military did not have law enforcement powers in Victoria.

“Defence support [currently] includes assisting authorities process international arrivals prior to their commencement of quarantine, and screening and temperature checking hotel staff as they enter and exit these facilities,” the spokesman said.

Victoria’s hotel quarantine scheme is now being managed by COVID-19 Quarantine Victoria, with Victoria Police supervising and enforcing compliance at all hotels, with the support of ADF personnel.

Some of the ADF troops arriving over the course of this month will help with the expanded program to assist Victoria Police who are working with international travellers when they arrive or leave hotels, as well as registering staff movements and checking the temperatures of workers before their shifts.

Others are expected to provide relief to some of the existing personnel in Victoria.

Victoria recorded no new locally acquired cases of COVID-19 on Sunday for the third day in a row. There are 1200 people isolating as a result of a 26-year-old hotel quarantine worker who contracted the virus, most likely at work.

COVID-19 response commander Jeroen Weimar said the “expectation” was that the state would need to record 14 days of no community transmission before it eased restrictions on the use of masks and indoor gatherings, as well as resuming its plans to allow 75 per cent of office-based staff to head back to work.

“Victorian businesses are paying the penalty for having an Australian Open for quarantining that hasn’t been entirely successful,” said AI Group’s Tim Piper.

“In the short-term the restrictions are having a marked impact because there’s no potential for a return to any sense of business certainty, and in the medium term these companies that are totally reliant on office workers are not getting them – so there’s a danger the longer these small businesses are unable to attract customers, the less likely they are to remain viable.”

Mr Foley revealed the government was investigating whether to fit-test all hotel quarantine workers with N95 masks, and follow NSW’s lead to bring in a “day 16” test for returned travellers.

He said a “further layer of protection” could be implemented in light of a New Zealand woman testing positive to coronavirus after leaving hotel quarantine in Auckland last month.

“Over the course of the weekend … we have worked with interstate colleagues, particularly in light of the New Zealand issue,” he said.

“We worked closely with particularly NSW to make sure a 16-day test arrangement will be rolled out consistently. All the states have to co-operate very closely in this matter.”

“We have seen from the wildly infectious developments of the variants of COVID-19, we have to be eternally vigilant and as the virus changes … we have to change to stay ahead of it,” Mr Foley said.

Mr Foley said the Victorian government was investigating the implications of a joint Queensland Health and Queensland Police Service report into the Brisbane hotel quarantine worker who acquired the mutant British strain of the virus in January, as well as transmission between residents at Melbourne’s Park Royal hotel this week.

“If that requires further measures such as N95 fit-testing in a wider application than is already in place, then of course that would be a measure we would take,” Mr Foley said.

'Dark, ADF, ARRIV, Foley, In, On, the
Celebrities