Offices across Melbourne sat dormant again in June as the city endured its fourth lockdown, slashing the number of staff travelling to work to 26 per cent of pre-pandemic levels, survey data from the Property Council shows.

Occupancy rates had finally recovered to 45 per cent of normal in May before the most recent stay-at-home orders were enforced and wound back the progress. 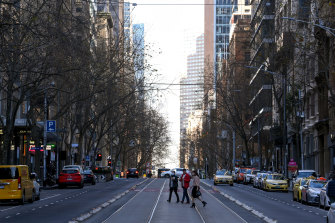 The council’s survey of major building owners and managers found occupancy rates for Melbourne had stagnated at 45 per cent for both April and May, when the city was still 23 per cent behind Sydney.

The fourth lockdown forced Melbourne to fall to 41 per cent behind Sydney in June. Sydney has since entered its own COVID-19 lockdown, which will hit occupancy rates in upcoming surveys.

Melbourne’s popular dining and shopping strips are dependent on city office workers, and Danni Hunter, Victorian executive director of the Property Council, said the state government needed to step in.

“Office workers are quite an anchor customer base,” she said. “Without office workers, people don’t stay in the city on Friday night … they don’t go out to drinks or go shopping on their lunch break.”

Masks are currently required indoors, including in the workplace, where occupancy is capped at 75 per cent, though many more staff continue to work from home.

Survey respondents expected it to take three months from the end of lockdown for occupancy rates to recover to 45 per cent, the Property Council said.

Ms Hunter wants a significant campaign beginning in the spring, incentives to use public transport, and a renewed Postcode 3000 program of the kind credited with transforming the CBD into a night-time destination in the 1990s. She wants a timetable for the return to work, and for density quotas and mask requirements to be relaxed when safe to do so.

Bourke Street Mall was busier during the lunchtime peak on Wednesday than it was during an average Wednesday in May, before the fourth lockdown, perhaps because of school holidays and better weather. But the number of people at Southern Cross Station was well below May’s performance.

The Victorian government and City of Melbourne have been handing out refunds for dining in the municipality, with more than $3.5 million in rebates provided so far. But Wednesday was the last day of free trading on the footpaths before permit fees are slowly phased back in for hospitality businesses.

Lord mayor Sally Capp on Monday said she was confident the city would bounce back and the market for office buildings would hold. She was celebrating the first day of construction on a 28-storey strata office at 130 Little Collins Street, by developer Golden Age, which has sold 50 per cent of its offices in the six months leading up to construction.

“It really is a strong statement of confidence in so many aspects of Melbourne,” Cr Capp said. “You would expect people to be assessing what their needs are into the future. But certainly at the moment, that interest and support for CBD offices remains healthy.”

Ms Hunter said the office market in Melbourne was resilient and few companies had cut back on their floor plans.