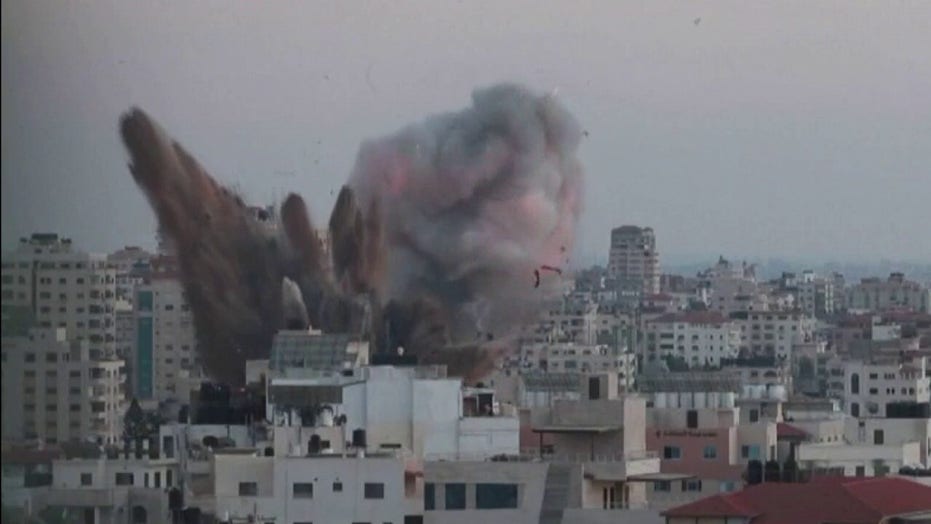 What is Hamas’ objective in Israeli-Palestinian conflict?

Thousands of protesters gathered in Los Angeles on Saturday to demonstrate support for Palestinians amid violence that has rocked Gaza and Israel over the past week.

The march started around noon outside the Federal Building on Wilshire Boulevard and wound its way through area streets, clogging traffic.

Demonstrators chanted and held signs saying “Free Palestine” and “End All U.S. Aid to Israel,” according to the Associated Press. They were heard shouting “long live intifada.” Police temporarily shut down traffic on Wilshire Boulevard and warned drivers to find alternate routes.

Some pro-Israel counter-protesters showed up, and police worked to keep the two factions apart. Protesters also gathered in Pittsburgh, New Orleans and Boston. 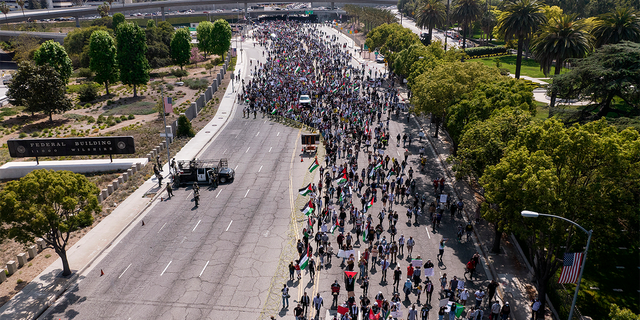 In this photo taken by a drone, thousands of demonstrators protest outside the Federal Building against Israel and in support of Palestinians during the current conflict in the Middle East, Saturday, May 15, 2021, in the Westwood section of Los Angeles. (AP Photo/Ringo H.W. Chiu)

Videos circulating social media show protesters swarming a California Highway Patrol car and at some points kicking it. Two protesters stood in front of the police car, but it continued to move forward as they pushed against it, video showed. At one point the car began to move faster and the protesters fell off to the side. The videos have not been independently verified by Fox News. 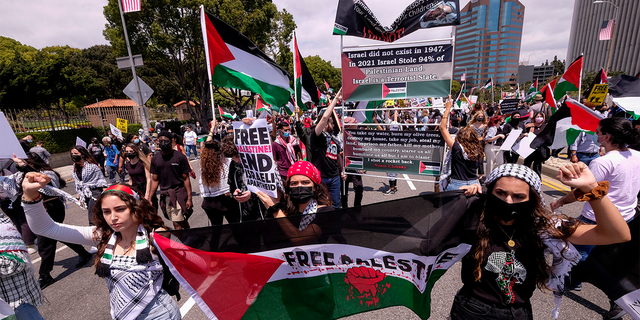 Demonstrators holding signs march to the Israeli Consulate during a protest against Israel and in support of Palestinians during the conflict in the Middle East, Saturday, May 15, 2021, in the Westwood section of Los Angeles. (AP Photo/Ringo H.W. Chiu)

An Israeli air raid in Gaza City killed at least 10 Palestinians, mostly children, early Saturday in the deadliest single strike since the battle with Gaza’s militant Hamas rulers erupted earlier this week. Both sides pressed for an advantage as cease-fire efforts gained strength.

Israel and Gaza are entering their sixth day of deadly attacks in the most serious conflict between Israeli and Gaza militants since 2014. Police and protesters began with clashes in the streets of East Jerusalem fighting over impending evictions and at the Al-Aqsa Mosque before the rocket attacks commenced. Violence has now spread to other regions where Jews and Arabs live side by side.

In Gaza, at least 139 people have been killed as a result of the air strikes and in Israel eight. An Israeli military official said Friday that at least 2,000 rockets had been fired from Gaza toward Israel since the start of the violence, according to Reuters. Many of the rockets were intercepted by Israel’s Iron Dome defense system.