French ambassador returning to Australia to ‘redefine terms of relationship’

Paris: France will send its ambassador to Australia back to Canberra following a bitter dispute over a new defence pact that sunk a $90 billion submarine construction contract.

French Foreign Minister Jean-Yves Le Drian, who last month accused the Morrison government of stabbing Paris in the back over the AUKUS deal, made the announcement while being questioned by French MPs on Wednesday afternoon, local time.

“I have asked our ambassador to return to Canberra … to redefine the terms of our relations for the future,” Le Drian said. 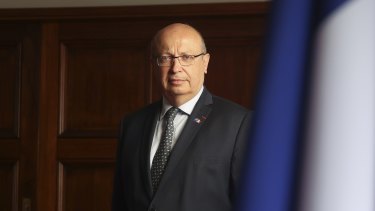 France’s ambassador to Australia Jean-Pierre Thebault has been in Paris since the spat.Credit:Alex Ellinghausen

Ambassador Jean-Pierre Thebault was recalled in mid-September amid the fallout from a shock deal for the US and UK to help Australia build a fleet of nuclear-powered submarines.

The deal sunk a $90 billion contract between Australia and France for 12 diesel-powered submarines, which Macron had used as a central plank of his strategy to be a major security partner in the increasingly contested Indo-Pacific.

The US has since conceded the AUKUS announcement was poorly handled and France should have been informed sooner.

US Secretary of State Anthony Blinken is currently visiting Paris in a bid to repair the transatlantic relationship. French President Emmanuel Macron is planning to meet US President Joe Biden at the G20 summit in Rome later this month to discuss the spat.