French winemakers try desperately to save crops by warming their vines

Montady, France: When Émilie Faucheron and her husband took over her father’s vineyard in southern France in 2014, she knew that climate change in this sun-soaked region could one day upend their business.

But she didn’t expect that day to come so soon – or to be so cold.

Last month, France saw record temperatures for March. Faucheron sensed spring was just around the corner, and so did her grapevines, which began to grow early. 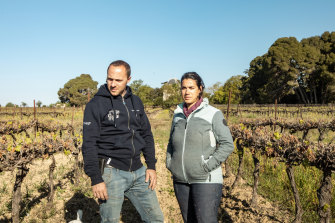 Emilie Faucheron and her husband stand in their vineyard in Montady, France. More than 80 per cent of their crops were destroyed in the recent cold snap.Credit:Sandra Mehl/The Washington Post

But on the night of April 7, a freeze with temperatures as low as -7 degrees descended on the region, piercing the vulnerable buds that had only just emerged and destroying 80 per cent of them in Faucheron’s vineyard.

“It’s terrible to have spent months working for nothing,” she said the following day, walking the rows of her vineyard and wiping away tears. “We put all our passion into it.”

Winemakers across France faced similar devastation, despite desperate last-minute efforts to protect their vines. Some had rented helicopters to hover above their estates and push warmer air towards the ground. Many lit candles or fires, making the country’s vineyards appear like glittering cities in the night. 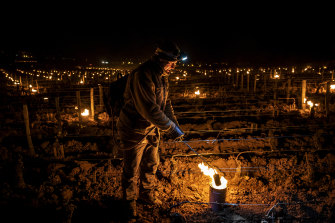 Winemakers in various regions of France lit candles between vines to warm them up in an effort to protect their crops from unusual late-night frosts this year.Credit:AFP

But as climate change progresses, solutions that once worked are no longer as effective. By the end of France’s big freeze, at least one-third of this year’s wine harvest and many other crops were lost, in what by some estimates was the country’s worst agricultural disaster of the century. It may take years for some vineyards to recover.

Drastic temperature fluctuations and erratic weather patterns may have a lasting impact on French wines and the way they are made. Increasingly, producers are experimenting with a range of options to mitigate climate change, including the cultivation of more robust grape varieties and a focus on emerging technology such as solar panels that could help protect buds and grapes.

This has become a particularly pressing issue in and around the Languedoc-Roussillon wine region, near the Mediterranean coast, where the recent cold snap followed a cascade of other crises linked to climate change.

“What is most surprising over the last five years is the suddenness and magnitude of the problem,” said Jean Natoli, a winemaker and oenology consultant. 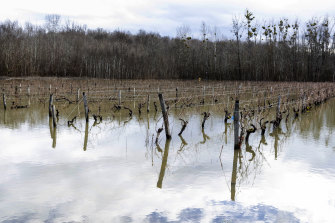 In 2019, many grapes in the region were grilled by a summer heat wave, as drought emptied water reserves. In other years, warm winters have lulled grapevines into a misleading biological sense of security – known as “false spring” – that encourages the plants to grow and makes them more vulnerable to frost later in spring. Had temperatures in March been lower this year, the cold snap this month would have caused less damage, experts say.

Faucheron said she had believed her vineyard – surrounded by lush Mediterranean trees and embedded in smooth hills – to be relatively protected. Even with the sound of a helicopter hovering over her neighbour’s estate and cold air seeping into her house early on April 8, she was optimistic that she had been spared the worst. So she rushed to help her neighbours. It wasn’t until later that morning that she noticed the lifeless leaves and buds hanging from most of her own vines.

In shock, she took out her phone and went live on YouTube (French link).

In a country where wine is part of the national identity, the video struck a nerve. In the following days, her phone kept ringing, as experts offered their advice. 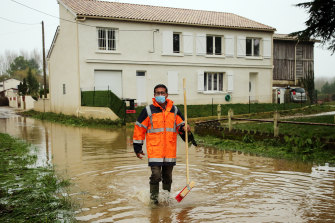 A volunteer on a flooded road in Coussan, near Marmande, south- western France. The worst flooding in 40 years swelled the Garonne River between Bordeaux and Toulouse in February turning orchards and vineyards into lakes. Credit:AP

“One cannot only live off state aid,” Natoli said.

Overlooking the devastated vineyard of one of his longtime consulting clients, Natoli said the wine region in the south was on the brink of a revolution that will fundamentally change the industry. Grape varieties that flourished here for hundreds of years may soon become unviable. Instead, winemakers will need to experiment with new varieties or techniques. Irrigation projects will need to be expanded to fend off drought.

But switching to different grapes takes at least three years, and success is not guaranteed, Natoli said.

A different sort of adaptation is on display on a plain outside the town of Piolenc, a two-hour drive from Faucheron’s vineyard, where researchers are hoping to turn southern France’s vineyards into solar power hubs.

Above a small vineyard owned by the local chamber of agriculture, French solar power company Sun’R Group has installed photovoltaic panels that can follow the path of the sun – and may at the same time protect vines from some of the most dire consequences of climate change.

In summer, the panels provide shade, reduce water consumption and cool the ground. During frost periods, the panels have the opposite effect and keep warmer air near the vulnerable buds.

For each grape variety and vineyard, the company calculates the optimal ratio between shade and sunlight to determine the solar panels’ movements. From a control room in Lyon, technicians can monitor the smallest changes to the vineyard’s microclimate, from humidity to temperatures, measured by tubes and sensors around the plants. Every few minutes, a buzzing sound indicates the panels above are recalibrating their position. 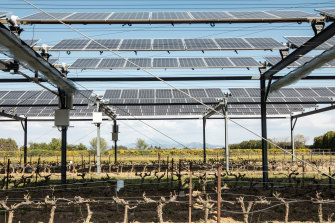 The French Chamber of Agriculture is conducting an experiment with solar panels to limit the effects of global warming on wine producing in Piolenc.Credit:Sandra Mehl/The Washington Post

The company’s pitch is that the panels can help winemakers minimise the risk of climate change-related losses, while giving solar energy investors access to land that is increasingly scarce in the country.

Only up to about 52,000 hectares of non-agricultural suitable land are still unused in France, said Jean-Edouard de Salins, director of global development at the company. The researchers say there is up to four times as much space still available on southern French vineyards and suitable farms that could be covered with solar panels.

The company says it had more than 60 projects in development and a number of competitors are vying for a share of the market, too. But whether they can succeed will also depend on how far vineyard owners are willing to go to counter climate change.

“If we do nothing, there will be no more vineyards,” said Silvère Devèze, an employee with the local agriculture chamber. To make the solar panel installations less visually disruptive, Sun’R offers to plant trees around them.

But Faucheron, the wine producer in Montady, cautioned that it is a solution that is “not going to be accepted everywhere.” She would be willing to consider such an installation in parts of her estate where few visitors ever go, but not in the vineyard’s picturesque centre that can be rented out for receptions.

Faucheron and Guibal hope their prior harvests will carry them through this year, but they are afraid of what’s next. Some vines may still produce secondary buds in the coming weeks, though they often do not produce many grapes, offering only a slight relief.

Inside Guibal’s wine cellar, each container is marked with the year of production. For now, some tanks are still filled with wines from prior harvests.

It’s a lifeline that may soon dry out.

“The disaster will strike next year,” Guibal said.