Thousands of Greek men demonstrated for several hours at Station Pier, Port Melbourne, on Saturday after the arrival of the "bride ship" Castel Felice. 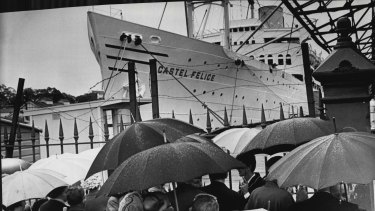 They had waited impatiently nine hours and a half for the ship carrying 800 women—many of them proxy brides—to berth and then because of a mix-up over the storage of luggage, another two hours passed before the first girls disembarked.

Police were called to the pier to control the crowd, which Customs officials described as "the biggest in memory.”

As the ship berthed the men became uncontrollable.

Women on board opened lower portholes and many men struggled through them into the ship before police and Customs officials could get through the crowd to close the portholes.

Others climbed ropes hanging over the side. Some scaled a giant crane on the wharf next to the ship. 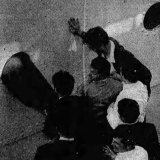 Hundreds more trampled and smashed crates of food which had been stacked on the wharf to be loaded on the ship.

Crowds started to form early on Saturday morning, although the Castel Felice was not due until noon.

When the ship eventually berthed at 3.30 p.m., train and bus loads of people were still arriving at the pier.

One man, reaching for the hand of a girl on the ship, overbalanced and fell into the water. Friends quickly hoisted him back on to the wharf and drove him off in a private car.

Customs men were kept busy all afternoon seizing parcels and tins containing food and articles of clothing thrown by the girls to the wharf.

Two fire brigades from Port Melbourne, and South Melbourne were called to Station Pier about 7 p.m. when a cigarette butt set fire to a section of the wharf near the entrance.

The Castel Felice was carrying 1400 migrants. All but 300 of the passengers were Greek. The rest were Hungarians, Yugoslavs and Italians.