From the Archives, 1971: Reporter home after Viet Cong kidnapping ordeal

I want to go back to war, says Kate Webb

SYDNEY. — Frail and tiny, Kate Webb, the Sydney journalist who spent 23 days as a prisoner of the Viet Cong, arrived in Sydney yesterday. 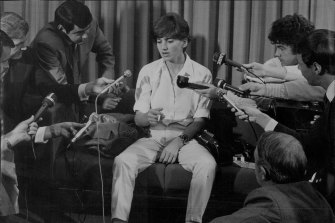 Kate Webb faces the microphones after returning to Australia.Credit:Staff photo

And she immediately announced, despite her experience, that she wanted to return to the war zone.

“I have friends there”, she said.

Miss Webb was almost unrecognisable as the attractive, dark, 28-year-old whose face has become familiar among the pages of newspapers and magazines since she was released from captivity last week.

Blinking in the glare of popping flashbulbs Miss Webb embraced the only member of her family waiting for her at the airport — her brother, Jeremy, 26.

She has another brother and a sister, both in Canberra.

Her parents are dead. 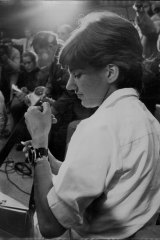 Kate Webb who was held by the Viet Cong for 23 days.Credit:Trevor Dallen

Friends who accompanied Jeremy to meet Miss Webb were concerned at her palor and subdued manner.

As she spoke to pressmen, Miss Webb’s hands trembled and she smoked almost continually throughout her interview.

She told reporters that she was “overwhelmed” at her reception.

Many times, Miss Webb hesitated before answering questions and interviewers found themselves answering their own questions.

She said she had thought at times that she would never live to see Australia again.

“They (the Viet Cong) said they never killed journalists — it was the Khmers Rouge who did,” she said.

She did not know the fate of the 17 journalists still listed as missing in Cambodia. What did she think of while she was held prisoner?

She said that the fact that she had been released could be interpreted as a propaganda act on the part of the North Vietnamese.

However, no attempt had been made to “indoctrinate” her or others with whom she was held prisoner.

“We asked them to talk to us,” Miss Webb added.

Before returning to Vietnam, Miss Webb will attend a dinner in New York which United Press International is giving in her honor.