Furlough numbers fall to 3.3million after lockdown eases as six in 10 workers venture back to offices

The number of people on furlough has tumbled to 3.3million as lockdown eases and businesses get back up and running.

Official figures show the proportion of the workforce having their wages funded by the massive government bailout dropped from 17 per cent in late March to 13 per cent in mid-April.

The fall came after non-essential retail finally reopened on April 12, and bars and restaurants were allowed to serve customers outdoors.

Meanwhile, some 60 per cent of workers are now travelling to their jobs at least some of the time – up from just 44 per cent in mid-February.

The shifts were revealed in the latest business insights survey released by the Office for National Statistics (ONS).

They emerged as the Bank of England dramatically upgraded its forecasts for the UK economy, hailing the vaccine rollout for sparking a stronger-than-expected recovery. 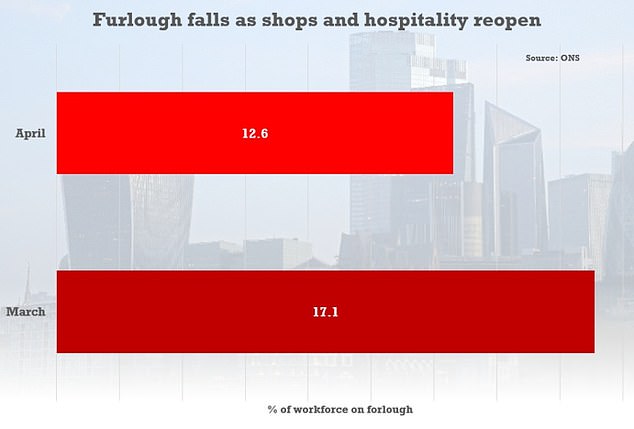 The ONS found that in the period ending May 3 the proportion travelling to work, either exclusively or some of the time was 60 per cent.

However, in a sign of the huge changes sparked by the pandemic a quarter of businesses said they intended to use increased homeworking as a permanent model.

Another 28 per cent said they were not sure whether it would continue yet.

The 13 per cent of the workforce on furlough leave in mid-April is equivalent to approximately 3.3million people.

In another bright sign the wholesale and retail trade reported they expect to see 29 per cent of its workforce return from furlough in the next two weeks.

The Bank of England today sharply increased its forecast for UK economic growth this year.

The central bank predicts GDP will rebound by 7.25 per cent in 2021 up from its previous prediction of 5 per cent, in its strongest growth since the Second World War.

The rosier view for the economy in 2021 came as the Bank’s Monetary Policy Committee held interest rates at 0.1 per cent – a unanimous and widely anticipated move, keeping it at the lowest level in the Bank’s 327-year history.

It kept its quantitative easing programme on hold at £895billion – although one member of the MPC voted to reduce it by £50billion given the brighter recovery prospects.

The Bank of England’s Monetary Policy Committee held interest rates at 0.1 per cent in a unanimous and anticipated move

The Bank predicts gross domestic product will rebound by 7.25 per cent in 2021 up from its previous prediction of 5 per cent