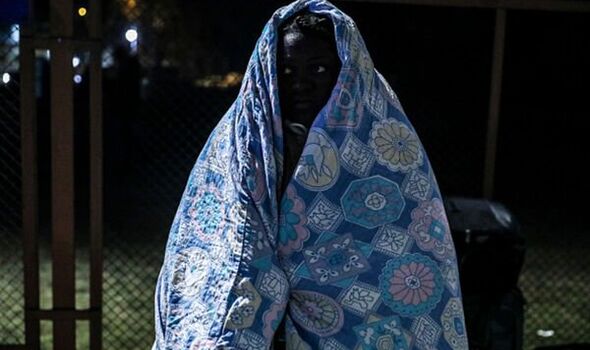 Korinne Sky, a British-Zimbabwean who moved to Ukraine to study medicine in September, painted a nightmarish picture of armed vigilantes on the streets. Ms Sky, who has a nine-month-old baby, said she had been threatened at gunpoint as a result of her skin colour.

In a series of tweets, Ms Sky said she had driven to the Romanian border and had experienced “some threats of violence from some local Ukrainians who don’t believe we should enter” including one man who tried to “lunge” at her.

Separately, father-of-three Osarumen, a Nigerian national, said he and his family were told to give up their seats on a bus leaving the country, with the phrase “no blacks” used by both the driver and military officers.

Osurumen, who said he was currently stranded at a train station in Kyiv, added: “In all of my years as an activist, I have never seen anything like this.

“When I look into the eyes of those who are turning us away, I see bloodshot racism; they want to save themselves and they are losing their humanity in the process. This isn’t just happening to black people – even Indians, Arabs and Syrians – and that shouldn’t be the case.”

Speaking in Korczowa in Poland, Nigerian managerial sciences student Agantem Moshe said Ukrainian police had pushed African people out of the way to make way for women and children.

In a joint statement issued on Monday, Senegalese President Macky Sall, the current chairman of the African Union and African Union Commission head Moussa Faki Mahamat said, they were “particularly disturbed by reports that African citizens on the Ukrainian side of the border are being refused the right to cross the border to safety”.

Nigerian presidential adviser Garba Shehu referenced a video appearing to show a Nigerian woman with a baby being forced to give up her seat on a bus. He commented: “All who flee a conflict situation have the same right to safe passage under UN Convention and the colour of their passport or their skin should make no difference.”

There were also reports of Polish officials refusing entry to Nigerians trying to cross the border, Mr Shehu claimed.

Poland’s ambassador to Nigeria Joanna Tarnawska told reporters: “Everybody receives equal treatment. I can assure you that I have reports that already some Nigerian nationals have crossed the border into Poland.”

In a statement, Nigerian embassy official Gabriel Aduda said: “We assure Nigerians that all hands are on deck and arrangements are being put in place to effectively evacuate our citizens.”

Ghana, the Democratic Republic of Congo and Ivory Coast are also working to evacuate their citizens from Ukraine.