In politics there’s always a photo you live to regret.

For John Howard, that image was captured in earthquake-ravaged Pakistan in 2005, when Aussie soldiers invited the then-Prime Minister to join in a game of cricket with local children. He bowled three balls, none reached the batsman. Speaking at the Bradman Foundation Gala Dinner in 2019, Howard described it as one of the biggest regrets of his political career.

For Scott Morrison, that moment came at the tail end of 2019 when he ran into some Aussie tourists in Hawaii and posed for a photo at sunset while making a Hawaiian “shaka″⁣ hand signal. The photo was posted online Australia was in the midst of a bushfire catastrophe. It haunted him and it can represent all that was wrong with his response to the natural disaster engulfing the country. 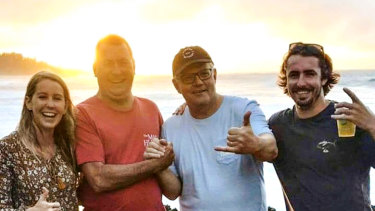 A happy snap taken by Australian tourists of Scott Morrison on holiday in Hawaii while bushfires ravaged in Australia.

For Daniel Andrews it was a seemingly innocuous photo taken in 2015 while he spoke to the ABC from Tiananmen Square in China.

Amid the rising scepticism about his state’s engagement with Chinese, the photo has come to represent his government’s cosy relationship with the authoritarian communist state and prompted questions about the benefits.

It was back in 2015 on that same trip – Andrews’ first visit to China as Premier – that he began spruiking the benefits of Victorian doing more business with Beijing. And who could blame him?

Since China initiated economic reforms in 1978, the communist state has experienced unprecedented growth. The numbers are staggering.

In 2017, China’s GDP was more than $12 trillion or about 82 times larger than it was in 1978 when it started to open up. Importantly, this economic growth has had real-world consequences, bringing millions of people out of poverty. 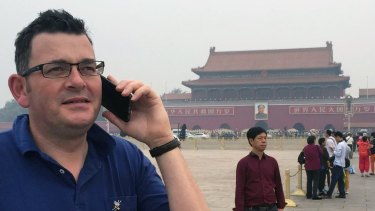 The photo the premier now regrets that was taken of him during a 2015 China trip.

Along with the Chinese middle class, Australia has been one of the greatest beneficiaries of China’s economic growth.

For the most part, China had preferred to take our gas and coal over rivals like Brazil. So too, our iron ore which China started to buy in the 1970s. It now accounts for over half of Australia’s exports to China. Education, tourism, food and wine also became important parts of the bilateral trade relationship.

Keen to get a bigger piece of the pie, the Andrews Government bypassed Canberra and formally signed up to Beijing’s signature foreign policy initiative, Belt and Road, on the promise of more jobs and investment opportunities for Victorians.

The State Government was apparently willing to overlook some of the questionable financing arrangements that lead to unsustainable debt. It also seemed happy to ignore claims that the deals were more about Chinese influence than development.

To its credit, the Andrews Government has continued to defend its relationship with the Chinese government even in the face of growing anti-Chinese sentiment. 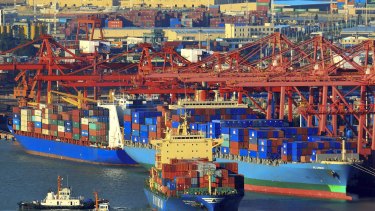 Trade between Victoria and China has skewed China’s way even more since the Belt and Road agreement was signed.Credit:AP

This would all be well and good if the deal was working.

The same data set showed a more than eight per cent jump in the merchandise exports to China from NSW, despite the state lacking a BRI agreement.

The Andrews Labor Government claims this comparison is unhelpful as Victoria’s geography means we don’t dig stuff out of the ground and ship it abroad. Fair enough. Tourism and education is where Victoria shines. Taking into account those less tangible commodities, the figures don’t look much better.

The latest International trade figures recently released by the Australian Bureau of Statistics reveal the gap between the amount Victoria imported and exported widened to more than $20 billion in December. That was despite Australia’s national trade surplus jumping 16 per cent.

If anything the two-way trade between Victoria and China has skewed China’s way even more since the Belt and Road agreement was inked. Since 2018, Victoria has imported a cumulative $42 billion more from China than it has exported.

Daniel Andrews might be right to question the motives of some of those launching broad attacks on China, especially in the wake of the global pandemic. But so far it’s difficult to argue that the deal has brought the promised benefits to Victoria.

Prompted by national security concerns, the Morrison Government has given itself new powers to tear up the deal. Only time will tell what consequences Victoria will face if the deal is broken.