Germany floods: Rebuilding begins in Ahrweiler where at least 117 were killed

In the heart of the broken town of Ahrweiler, with mud and debris all around you, a huge water pump makes its racket.

Every minute, 12,000 litres of water are being pumped out of a flooded underground car park, while teams of firefighters watch on anxiously. It is not the water that worries them, but the dread of what they might find within it.

The firefighters believe there could be 50 cars on the lowest floor, two stories below ground. And, as the flood waters rushed in at the end of last week, locals say they saw plenty of drivers go into the car park to try to rescue their vehicles. But they say they saw very few people come out.

What’s more, at some point a fire shutter fell – probably as a result of an electrical fault – sealing off the bottom floor. 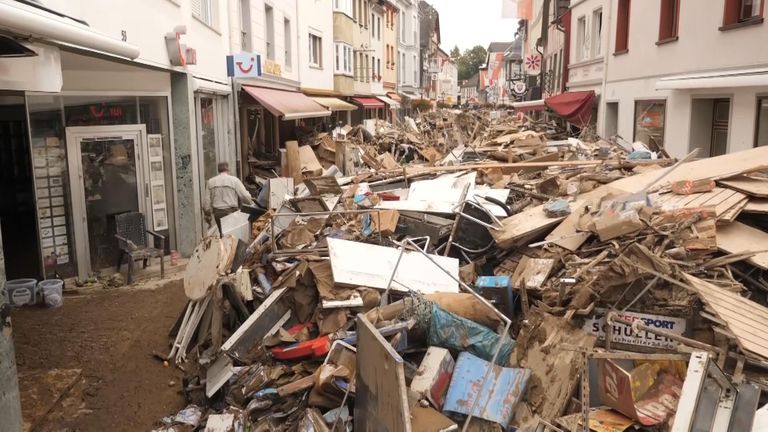 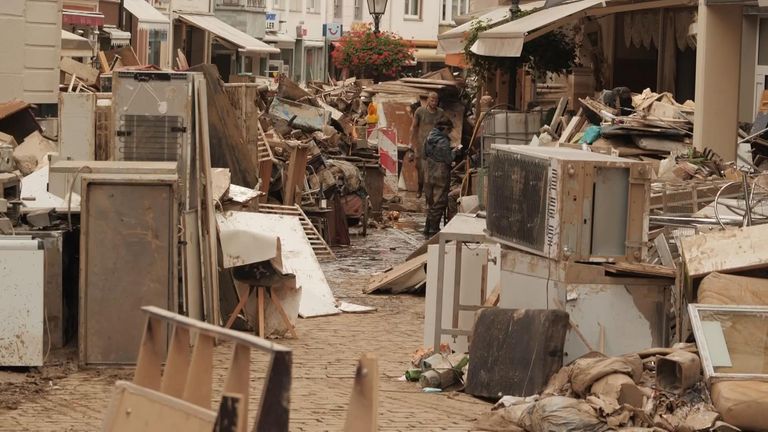 Holger Quint is the deputy commander overseeing the operation. He tells me that there was “no chance” of anyone surviving being caught in the car park.

“We are expecting to find some people who have died,” he says. “Maybe,” he pauses. “Maybe lots.”

This is, he says, a once in a lifetime challenge for him and the firefighters around him. Many of them are young, trained and experienced with fires but not accustomed to this sort of lurking trauma. They have already been offered counselling.

Germany is shocked, along with Belgium, the other nation hit with lethal flooding.

But this was not a violence wrought upon a whole nation – the floods hit a few areas, and left most of the country untouched. Nevertheless, those caught up have been ravaged.

To walk around Ahrweiler is to experience a lesson in the ferocious, capricious power of nature.

Cars are strewn around – smashed and filthy. Some have ended up in people’s gardens. I saw one car stuck in a tree.

The historic centre of the town is now dominated by a snaking line of debris, piled six feet high, outside every shop and bar. 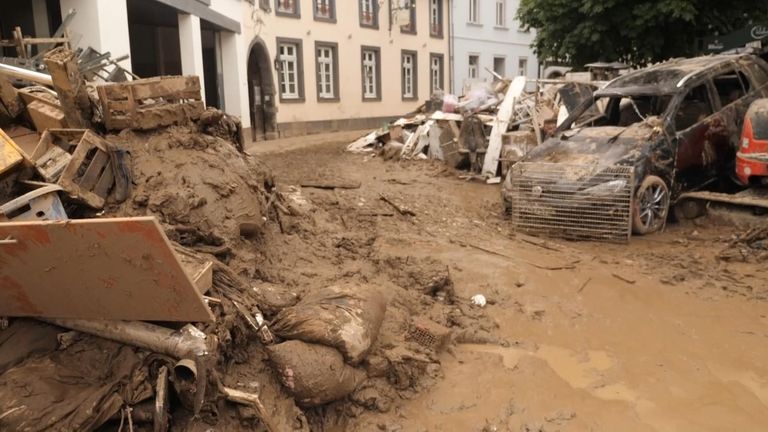 It feels like walking through a pastiche of a world war trench – thick, gloopy mud under your feet and dirty walls either side of you.

And, perhaps, also some sense of that camaraderie.

We met a soldier who had come to the town on a day of holiday, accompanied by his daughter and her girlfriend, and simply volunteered to help anyone who needed it.

There are plenty who do. As we walked past one apartment Andy was throwing its filthy contents out of the window. His mother lives there – she is in her 80s – her husband is in hospital and her insurance company has told her she is not covered for natural disasters.

“She has nothing now,” says Andy. “Nothing except her cat.”

We walk on, past holes in the road and alongside the river that caused all this chaos, but which now flows like normal, benign and well within its banks.

In the ruined front garden of a house overlooking the river is Lieselotte Giffels who has lived here for six decades. She shows me the plates she got as a wedding present, half a century old but now smashed, and reveals that one of her neighbours drowned.

And yet she is determined not to be cowed by what has happened.

No, she will not be leaving this house, she says. It is a good house, she has lived here a long time, and she’ll carry on living here. She can even smile.

It is the sort of resilience that this region needs. But resilience is a long-term project.

The scars of these floods will last for a long time and repairs will surely cost billions.

There is still more pain to come. Back in the town, the pump at the car park is still working and the firefighters are waiting for the moment when it is safe for them to discover what awaits them two floors down.