China has removed giant pandas from its list of endangered species after the number living in the wild increased.

There are now 1,800 pandas living in the wild, according to Beijing, meaning the species is classified as ‘vulnerable’ instead of ‘endangered’.

Pandas were first listed as ‘endangered’ in 1990, but more than 30 years of conservation work has seen their numbers swell.

In the last decade alone, the number of pandas living wild in China has increased by almost 20 per cent. 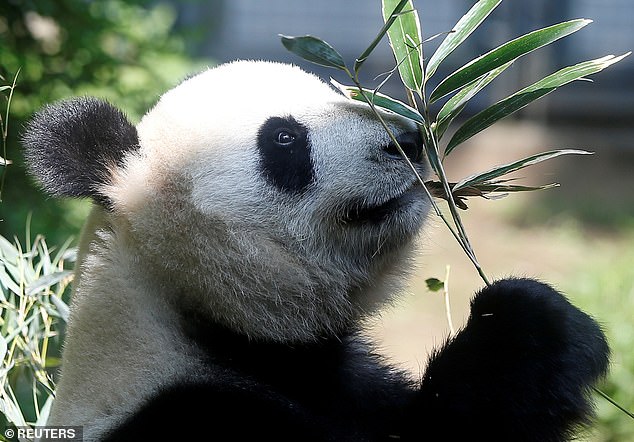 Giant pandas are no longer classified as endangered, according to Chinese conservationists, with 1,800 now living in the wild (file image)

Beijing has put the success down to efforts to increase their habitat by replanting and repopulating bamboo forests.

Bamboo makes up almost all of a panda’s diet, with an adult needing to consume up to 45lbs of bamboo stems every day.

Breeding programmes within zoos – with offspring used to top up wild populations – have also helped to increase the population.

China’s move comes five years after the International Union for Conservation of Nature, which runs the global ‘red list’ of threatened species, also removed giant pandas from its endangered list.

Beijing disagreed with the move at the time, saying it believed the threat to wild pandas was still substantial enough to warrant the endangered classification.

Reclassifying the panda within China ‘reflects their improved living conditions and China’s efforts in keeping their habitats integrated’, said conservationist Cui Shuhong during a press conference.

Pandas are one of the world’s best-known conservation symbols, and also serve as the national animal of China where they are beloved by most Chinese.

Captive pandas are also a big money-spinner for China, which leases the animals out to zoos around the world for up to $1million per year because of the size of the crowds that they draw.

The panda was chosen as the logo of the WWF in 1961, with the design created by the organisation’s founder Sir Peter Scott because of the animal’s public appeal.

However, they are far from the world’s most-threatened animals, with many other well-known species classified below them.

The species ‘red list’ classifies all living things – both plants and animals – into seven categories ranging from ‘least concern’ to ‘extinct’.

Where a species falls on the list depends on the number left in the wild, whether the population is increasing or decreasing, its range and its habitat.

‘Endangered’ – where pandas used to sit on the list – is the fourth lowest category, one stage above ‘critically endangered’ which includes the likes of western lowland gorillas and orangutans.

To qualify as ‘critically endangered’, a species will have fewer than 250 individuals left in the wild, a maximum range of less than 40 square miles, or a 50 per cent chance of going extinct within 10 years according to scientists.

Endangered species has fewer than 2,500 individuals, a maximum range of less than 2,000 square miles, or a 20 per cent chance of extinction within 20 years.

Vulnerable species, where pandas now sit, will have fewer than 10,000 individuals left, a maximum range of 8,000 square miles, or a chance of extinction of 10 per cent within 100 years.