The five-day music bender will see a whopping 200,000 people head for the site in Pilton Somerset.

And while many dread the horrifying sights and experiences of festival loos, this year’s attendees have been offered a more cultured experience.

A toilet named the Loovre, a play on the name of the famous Paris art gallery has been erected.

The loo is placed inside an art gallery, featuring some of the world’s most infamous pieces of artwork.

Video of the facility shows the seat placed in the centre of the art covered walls.

Michelangelo’s sculpture David is seen perched on a cubicle with his legs crossed after being denied access to a toilet.

And the artist’s renowned The Thinker statue is also pictured in the port-a-loo, where the organisers have re-named him the stinker.

But the snazzy bathroom facilities haven’t been launched just to look cool.

WaterAid has launched the loo in a bid to bring attention to the fact one in four people across the world are denied access to a toilet. 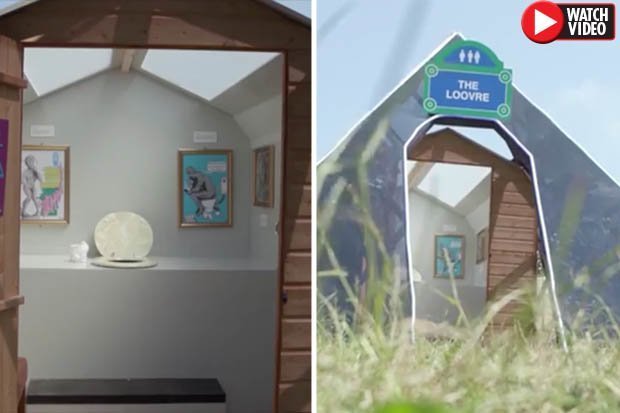 The charity believes it’s a great way to raise awareness.

Tim Wainwright, chief executive at WaterAid, said: “This fun exhibition provides some entertainment and contemplation while using the convenience, as well as conveying a serious message: no-one should have their access denied to decent sanitation and clean water because of who they are or where they live.

“One in four people – that’s two billion people across the globe – have nowhere safe or decent to go to the toilet.

“We are calling to join us as we fight this inequality and work towards a world where everyone, everywhere has access to these basic human rights.”

To visit the Loovre, head to the Pyramid Stage and look for the Cider Bus.