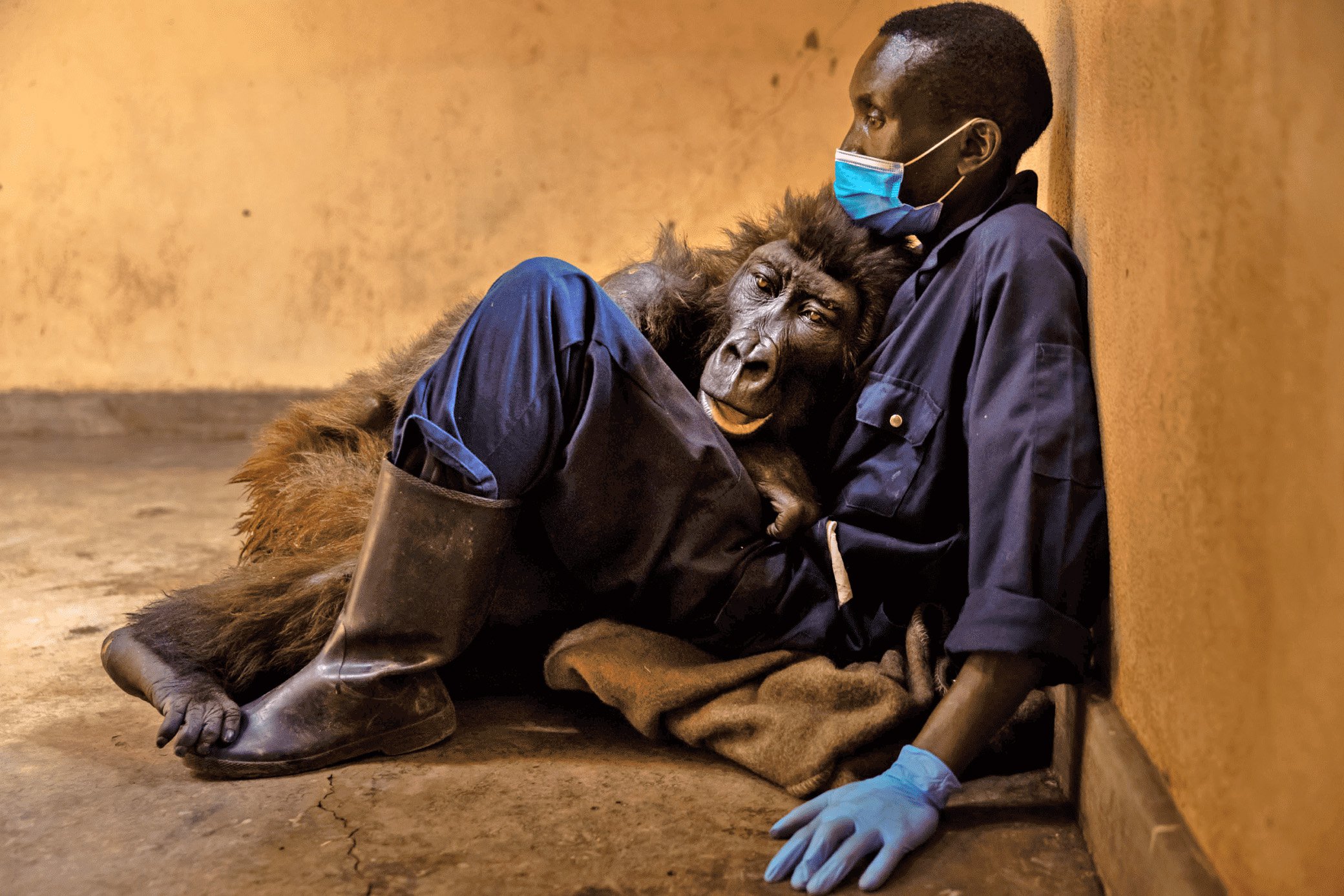 Ndakasi the mountain gorilla became known the world over for her adorable selfie with a park ranger in Congo.

The viral photo had people in stitches at the way Ndakasi mimics Mathieu Shamavu, who along with Andre Bauma, rescued her in 2007.

Andre found her clinging to the lifeless body of her mother after the militia wiped out her family while hunting for bushmeat.

At just two-months-old, Ndakasi was taken to the Senkwekwe Center in Virunga National Park to live and be rehabilitated with fellow orphaned gorilla Ndeze.

She was too vulnerable to be released back into the wild, but she lived a good life and made remarkable connections with the people who cared for her.

Sadly, the beloved gorilla passed away aged 14 last week, dying in Andre’s arms after a prolonged illness which rapidly deteriorated.

‘Ndakasi took her final breath in the loving arms of her caretaker and lifelong friend, Andre Bauma,’ the park rangers said.

A heartbreaking picture shows Mr Bauma sitting on a blanket on the floor while Ndakasi lays her head on his chest.

The pair were used to being this close, as the ranger would keep her warm by holding her against his body when she was first rescued.

He said: ‘It was a privilege to support and care for such a loving creature, especially knowing the trauma Ndakasi suffered at a very young age.

‘One could say that she took after her mother, Nyiransekuye, whose name means “someone happy to welcome others.”

‘It was Ndakasi’s sweet nature and intelligence that helped me to understand the connection between humans and Great Apes and why we should do everything in our power to protect them.

‘I am proud to have called Ndakasi my friend. I loved her like a child and her cheerful personality brought a smile to my face every time I interacted with her.’

Ndakasi was featured in the documentary Virunga, a film showing the ‘brave individuals risking their lives to protect the last mountain gorillas’.

The animals are listed as endangered, who are struggling to survive ongoing habitat loss, poaching, and the spread of diseases such as Ebola.

Virunga is one of the last parks trying to conserve mountain gorilla populations but it relies on donations from visitors and tourists.

This is difficult to come by because of the dangers posed by conflicts in the region.

Tourists have to be escorted by specialist rangers and sniffer dogs for their own protection.

At one point, the park had to close after a ranger was shot dead and foreign visitors were held captive. It reopened in 2019.

But the picture is not all bad as population numbers are rising.

The rangers added: ‘Ndakasi’s playful nature was a reminder to the world of how much we see ourselves in these animals and it’s one of the reasons Andre Bauma will miss her so dearly.’