Government borrows another £31BILLION in April

The government borrowed another £31.7billion in April – the second highest level on record for the month – despite signs of economic recovery.

The huge sum was added to the debt pile as ministers kept splashing out to prop up businesses amid the pandemic.

The only previous higher borrowing for April was last year during the first brutal lockdown. It pushed the UK’s debt mountain to £2.17trillion – the largest in relation to GDP since the Second World War.

However, there were positive signs in the ONS data, with higher tax receipts and lower Covid spending meaning the overall borrowing was lower than had been feared.

Chancellor Rishi Sunak said the latest figures showed the country is getting ‘back on its feet’.

Central Government receipts were £58billion in April – up £3.8billion on the same month in 2020. 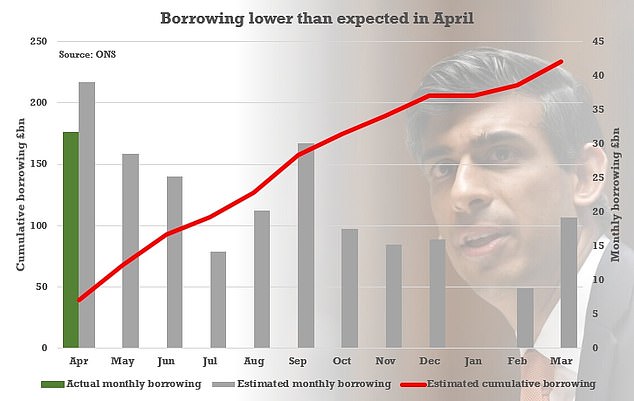 The government borrowed another £31.7billion in April – the second highest level on record for the month – despite signs of economic recovery

Public borrowing was £15.6billion less than the April 2020 record.

That was £27.1billion less than the Office for Budget Responsibility’s most recent forecasts as the economy starts to recover following the vaccine rollout and lifting of Covid restrictions.

A large proportion of the additional spending by Government was generated from the various support schemes for businesses and workers during the Covid-19 pandemic – increasing day-to-day spending by £204.1billion to £942.7billion.

Tax and National Insurance contributions in the financial year to the end of March was down £32.7 billion to £670 billion, the ONS added.

Chancellor of the Exchequer Rishi Sunak said: ‘At the Budget, I set out the steps we are taking to keep the public finances on a sustainable footing by bringing debt under control over the medium term.

‘But we also need to focus on driving a strong economy recovery from the pandemic. That is why the Government is continuing a comprehensive package of support to help businesses and workers get back on their feet – and the evidence shows that our Plan for Jobs is working.’

Isabel Stockton, research economist at the Institute for Fiscal Studies, pointed out that borrowing over the last 12 months is now falling rather than rising.

She added: ‘But at an estimated £32billion, April’s borrowing was still £21billion above – or almost three times bigger – than the £11billion borrowed in April 2019.

‘How quickly it comes down will be mainly driven by how swiftly, and how fully, the economy recovers as the lockdown eases.

‘Growth prospects for 2021 have increased materially in recent months which, if realised, should deliver greater tax revenues in the current financial year.’ 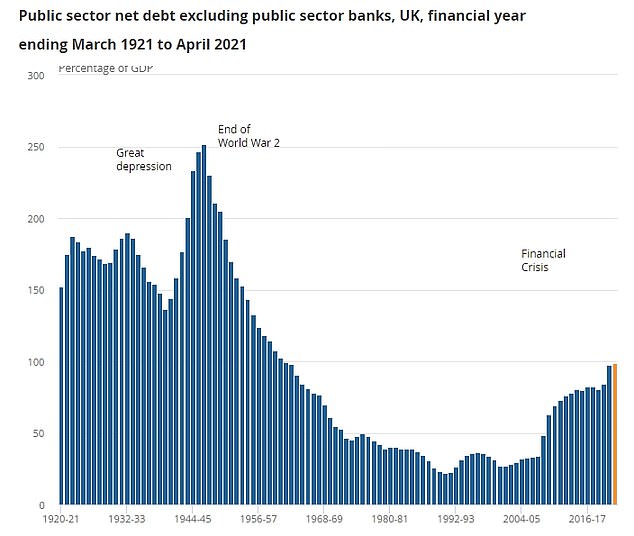 The amount of Government debt was £2.17trillion at the end of April, or around 98.5 per cent of GDP, the highest ratio since the 99.5 per cent recorded in March 1962