Victoria’s biggest coronavirus outbreaks are spreading in areas with the lowest vaccination rates as doctors fear Melbourne’s northern suburbs will face an explosion of infections within weeks.

The local government area of Hume in Melbourne’s north has the highest number of active coronavirus infections in Victoria, but it also has the lowest percentage of its eligible population fully vaccinated.

An analysis by The Age also found Hume has the second-lowest first dose rate of the state’s 79 local government areas as of Sunday, hovering at 48.2 per cent of the population, compared with 60.8 per cent for the whole state.

More than a quarter of Victoria’s 1786 active COVID-19 cases are in Hume.

By comparison, Victoria’s regional communities are leading the vaccination race, with 25 regional council areas already passing the 70 per cent first-dose COVID-19 vaccination target as the government prepares to ease restrictions outside of Melbourne this week.

The analysis came as Premier Daniel Andrews tore into the Commonwealth’s COVID-19 vaccine rollout, accusing Prime Minister Scott Morrison of pouring more jabs into NSW at the expense of Australia’s other states.

Addressing reports that NSW received 45 per cent of Pfizer vaccines allocated to general practitioners last month, Mr Andrews said the disparity was allowing NSW to sprint while other states ran an “egg-and-spoon” race.

But doctors in Melbourne’s northern suburbs, including Hume GP John Hodgson, who runs a respiratory and vaccine clinic in Coolaroo, said it was not just a shortage of doses hampering the immunisation rollout.

The veteran GP said efforts were also being thwarted by high levels of vaccine hesitancy, including among migrant communities and the elderly, who were shunning the vaccine amid concerns about side effects.

Dr Hodgson said there were still entire families resisting the vaccine in Hume.

“We are all really fearful that there will be an explosion of cases in the northern suburbs in the coming weeks,” Dr Hodgson said.

“There remains a huge concern around conspiracy theories that are circulating by word of mouth.”

Dr Hodgson, whose clinic is running at capacity administering 100 doses a day, said it had been further challenged by a nursing shortage.

“Even if we wanted to expand our clinic we would have to be able to find the nurses to staff it and that has proven difficult,” he said. 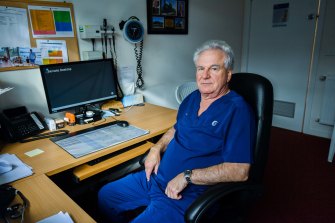 Northern suburbs GP Dominic Barbaro said he and his colleagues are “all bracing for a huge surge of cases”.

Dr Barbaro has been counselling an increasing number of elderly patients who he said had been advised by their adult children not to get the AstraZeneca vaccine due to concerns over an extremely rare side effect linked to just one local death in people aged over 60.

Dr Barbaro, who is in his 70s and has been fully vaccinated with AstraZeneca, said he had been telling patients that “Pfizer might be available at the end of the year, but it’s not much good if you’re dead before then”.

“I tell them you’ve got to protect yourself, your children, your grandchildren and your community,” he said.

Dr Hodgson said the government must consider innovative approaches to getting vaccines out to families in the northern suburbs, including employing mobile medical teams who could doorknock homes and try to encourage residents to be vaccinated.

Such models have been used in Israel, where healthcare workers armed with vaccines have visited neighbourhoods with low vaccination rates.

“We have to be taking the vaccine to them rather than waiting for them to come to the vaccine,” Dr Hodgson said.

Last week, Mr Andrews said he was prepared to “put a van at the end of your street and go door to door” asking people to get vaccinated if necessary.

A mobile vaccination bus has also begun operating in the Goulburn Valley, bringing Pfizer and AstraZeneca doses to people in remote areas.

Wyndham has among the highest active case rates in the state, but last week it had the biggest proportional boost in first dose numbers and 8.8 per cent of the area’s eligible population received their first dose in the last week.

Meanwhile, in Greater Shepparton, which weathered a major outbreak in recent weeks, 8.3 per cent of the eligible population also got their first dose last week. 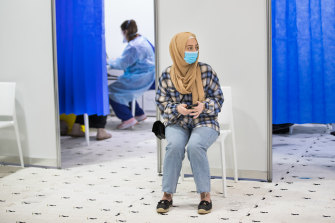 A woman waits to get her COVID-19 vaccine at a pop-up vaccination centre at the mosque on Blenheim Road, Newport.Credit:Jason South

Queenscliff has Victoria’s highest vaccination rate, with 91.8 per cent of residents already receiving a first dose, followed by the Surf Coast, with 79.6 per cent.

Anglesea resident Julie Martin was among those who rushed out to get her Pfizer shots as soon as she became eligible.

Ms Martin, who received her vaccine doses at the former Ford building in Geelong, said many people in her social and family networks were also immunised.

He urged federal Health Minister Greg Hunt to explain what he described as a “secret” and “under the table” arrangement.

Mr Hunt dismissed his criticism, saying Victoria had received a higher per capita vaccine allocation than NSW and that “some people are looking for a fight”.

A Victorian Health Department spokeswoman said the government was “doing everything it can to ensure everyone who wants a vaccination can get one.”

She said the department was working closely with community and faith leaders to building trust in COVID-19 vaccines.

“By getting timely, accurate information to where it’s needed most, community leaders are reducing vaccine hesitancy and driving vaccination uptake,” she said.