Sprawling Grade II listed mansion once owned by Ozzy and Sharon Osbourne and actor Dirk Bogarde – and boasting its own pool, spa, croquet lawn and tennis court – goes on the market for £3.95million

A sprawling mansion which is surrounded by rolling countryside views and was previously owned by celebrities including Ozzy and Sharon Osbourne, Dirk Bogarde and Robert Kilroy-Silk is on the market for a £3.95million.

The Grade II-listed Beel House, which is located in the picturesque village of Little Chalfont in Buckinghamshire, features eight bedrooms, a large indoor pool, spa, steam room and a tennis court complete with a wooden pavilion.

The Georgian property, which sits close to the racing venues of Ascot and Windsor, also boasts four bathrooms, a library,  a games room and a croquet lawn.

Among its former owners are Black Sabbath rocker Ozzy Osbourne, 72, and his wife Sharon, 68, who moved into the mansion with their children in the early 1980s. 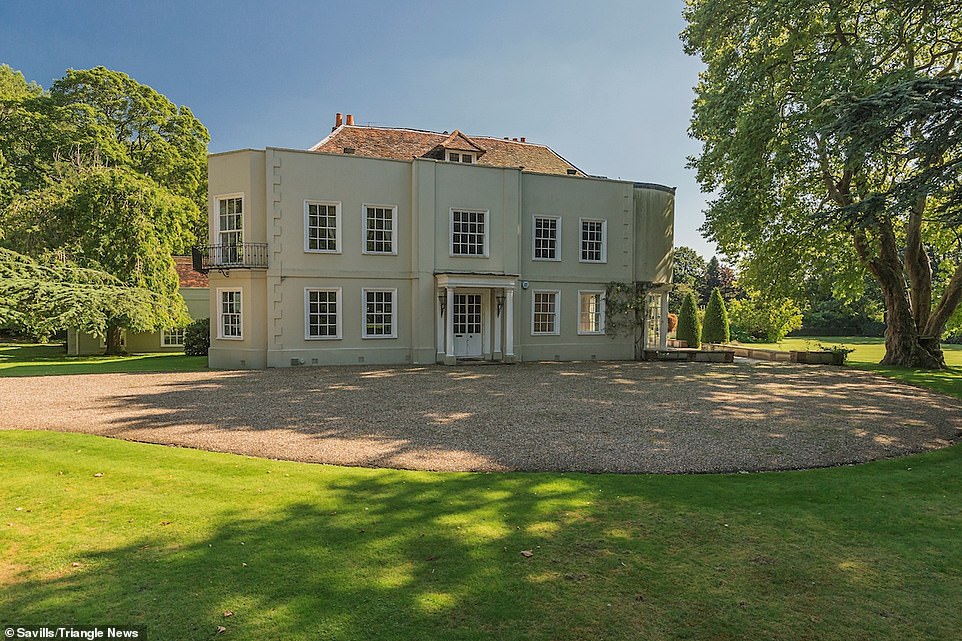 The sprawling mansion which is located in the picturesque village of Little Chalfont in Buckinghamshire, has gone on the market £3.95million 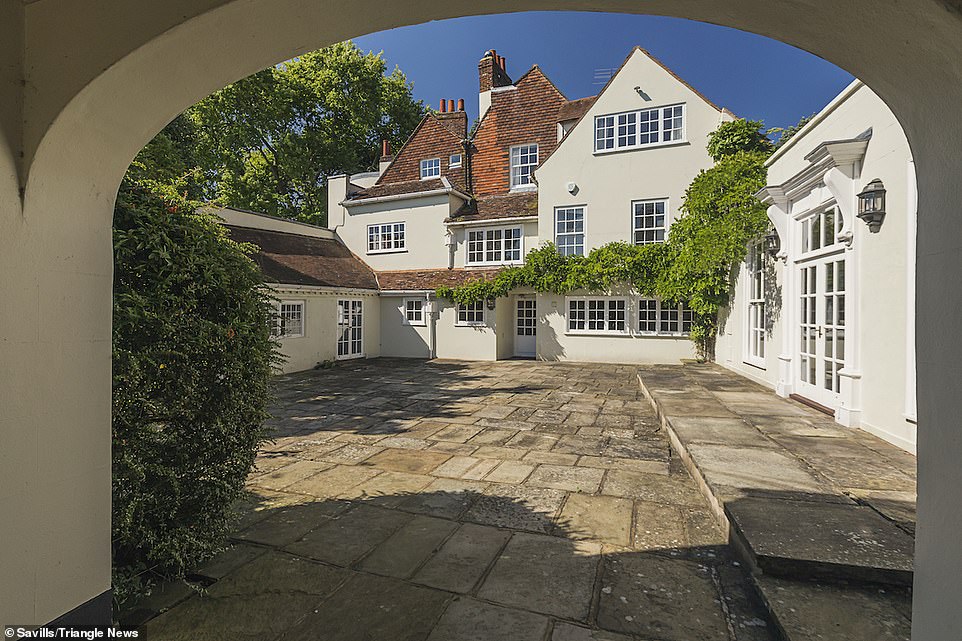 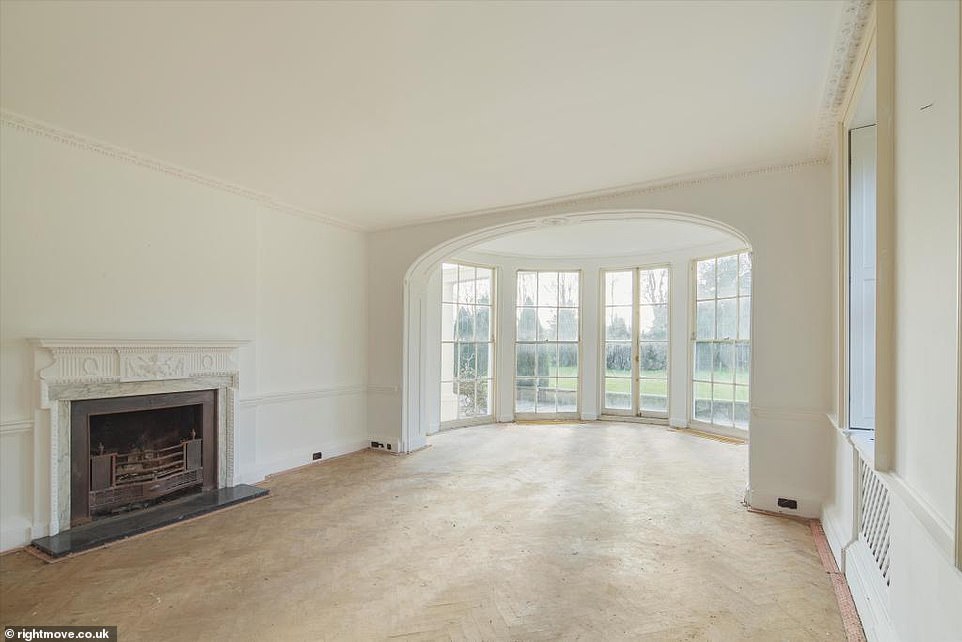 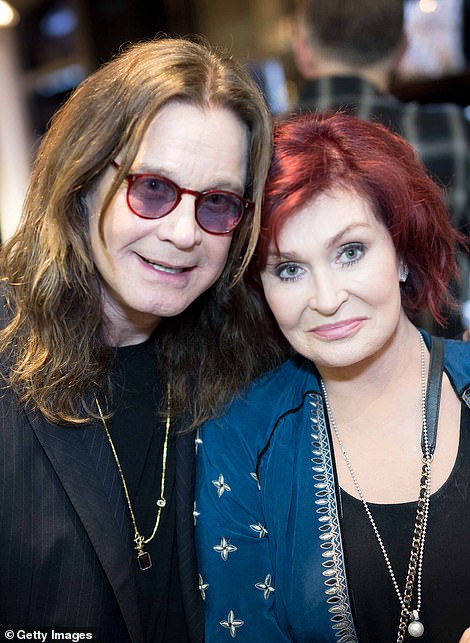 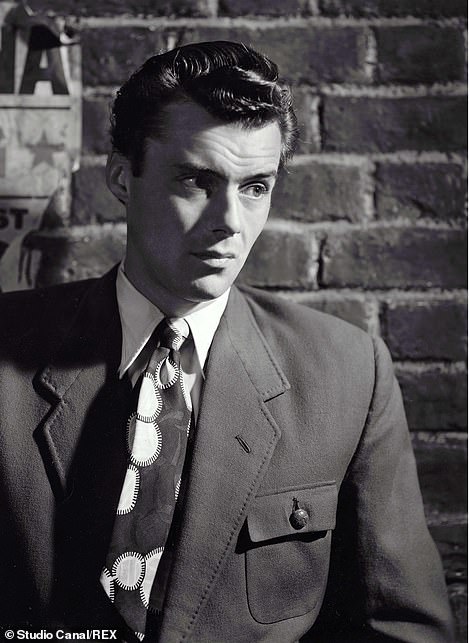 Among its former owners are Black Sabbath rocker Ozzy Osbourne, 72, and his wife Sharon (left), 68, and actor Dirk Bogard (rght)

A step inside the property reveals a spacious living room that is fitted with a fireplace and comes with large windows that allow plenty of daylight to flood through.

There is also a large indoor pool that comes with changing and shower rooms and a games room that features a bar area that provides an entertaining space away from the main house.

The house also looks over a deer-filled park and is understood to have been built for the Duke of Buckingham in the 1600s.

The property was later handed to a mystery international buyer, who bought it through Gibraltar-registered Natco Property Bare Trustees Ltd.

But the buyer quickly found it surplus to requirements and put it back on the market through Savills, according to Country Life’s Penny Churchill.

Hugh Maconochie, of Savills’ Country Department, said: ‘In many respects Beel House is the perfect country residence; a magnificent Grade II listed period home in the heart of the Chilterns, set in glorious parkland grounds, within easy reach of London by either road or rail.

‘Yet, while it was completely refurbished in the 1980s – with new garaging, a games block and swimming pool complex – and the current owners have added a new roof, it’s not somewhere that you’d be able to move into instantly. 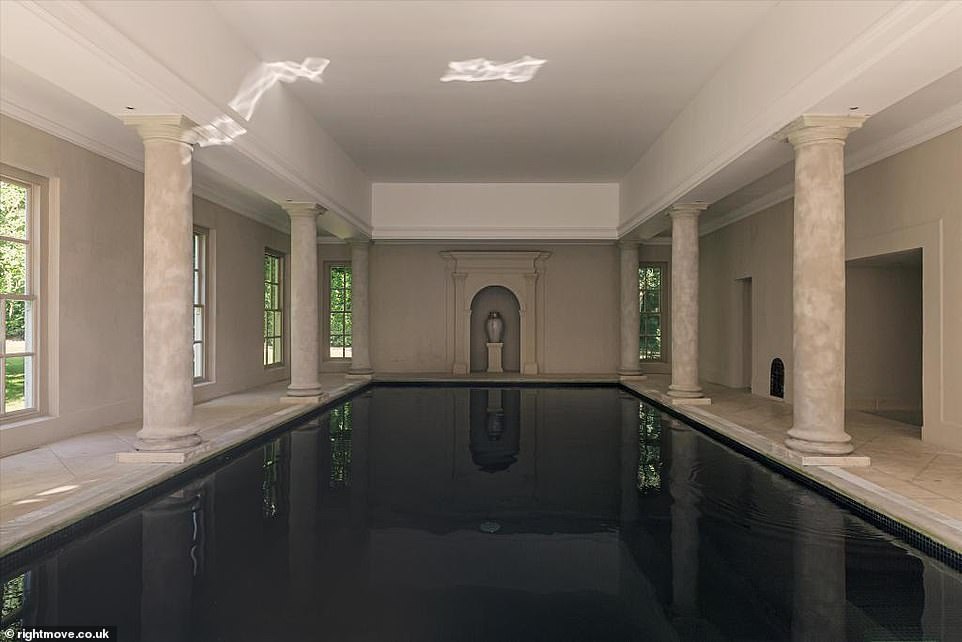 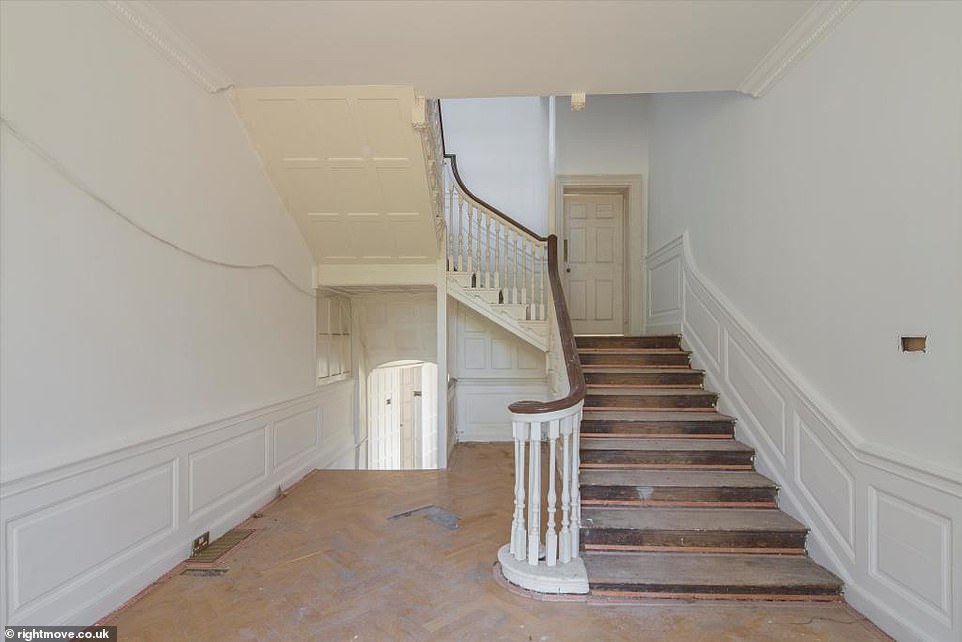 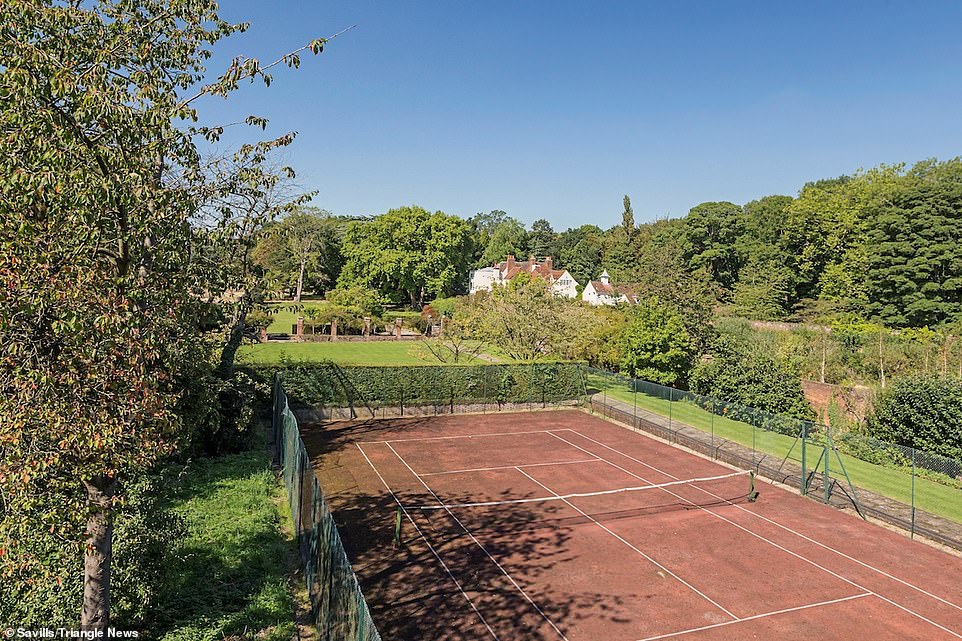 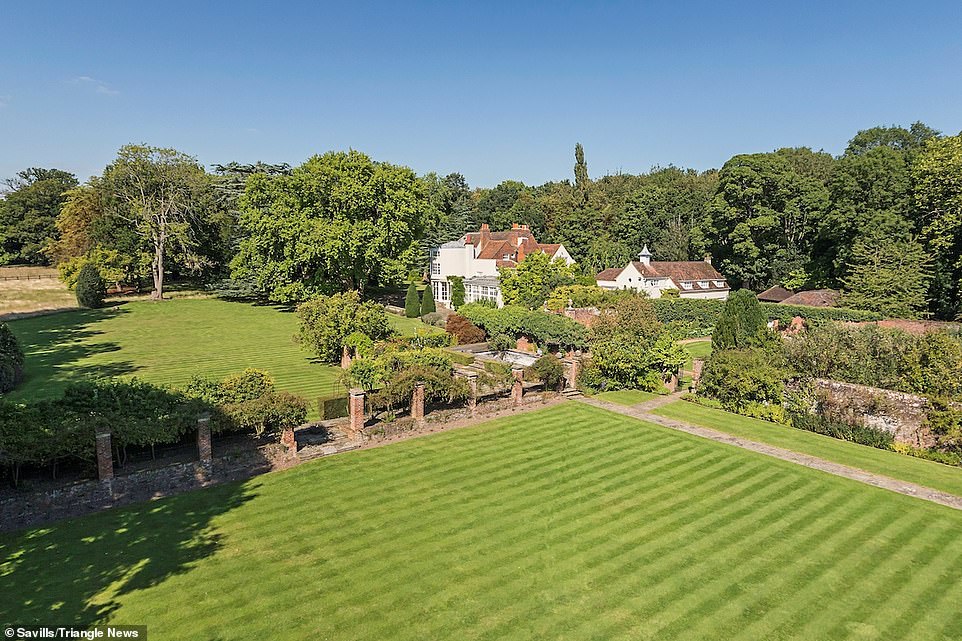 The property, which sits close to the racing venues of Ascot and Windsor, comes with a sprawling lawn and also looks over a deer-filled park 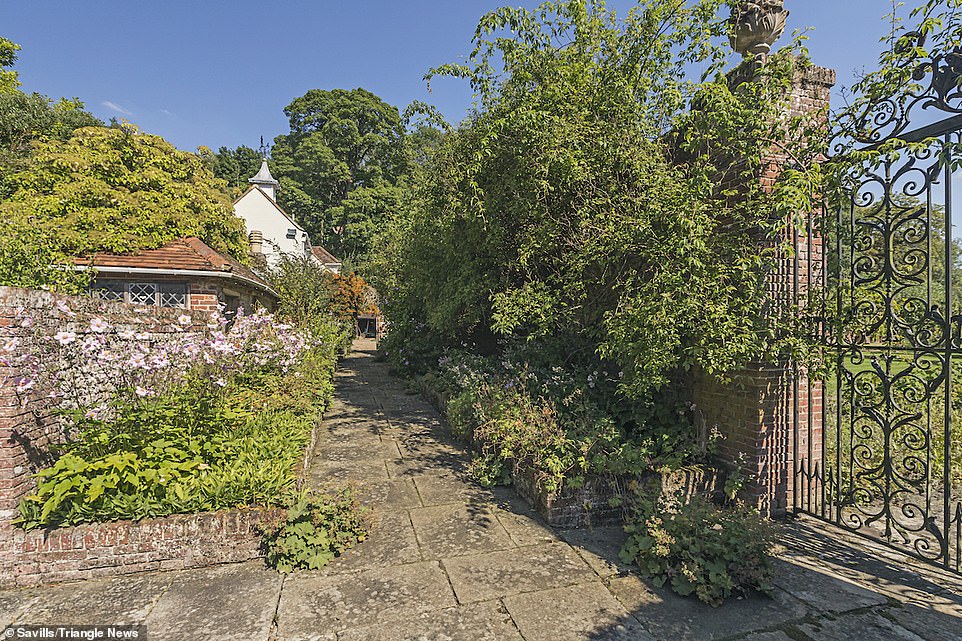 The property, which is surrounded by plants and trees, also boasts four bathrooms, a library, a games room and a croquet lawn

‘It requires a complete internal restoration, however for the right buyer it would be an extremely exciting project – representing an incredibly rare opportunity to revive one of the region’s finest country houses, creating something in their own style, on a private estate in a highly desirable location.’

Home to Lady Caroline Cavendish in the 1830s and Colonel Abram ‘Arthur’ Lyle of the Tate & Lyle dynasty from 1909 to 1920, Beel House was bought by the actor Sir Dirk Bogarde in a dilapidated state in 1954.

He had been renting a cottage nearby and said: ‘The actress Kay Kendall and I walked across muddy fields from my rented home to look at Beel House. It was a horror. Bleak and empty, few of its twenty-six rooms caught the sun, and the garden surrounding it was a tangle of overgrown rosebeds.

‘Inside it seemed a labyrinth of corridors and stone passages. It was painted throughout in dejected yellow and brown and each room had a rusty gas fire in it.’

He bought the property for £4,000 and ended up pulling down one of its wings.

He then built a swimming pool and a 30ft-long conservatory in the grounds – which Kay Kendall later described as looking like ‘an outpatients’ department’.

Stars including Judy Garland, Michael Wilding, Glynis Johns and Denholm Eliot are all said to have visited him there.

He moved in 1960, selling the house to Basil Dearden, director of films The Assassination Bureau, Khartoum and The Man Who Haunted Himself, but Basil was killed in a car crash in 1971.

In 1989, Ozzy Osbourne attempted to kill Sharon at the property and was soon arrested and made to complete six months in a rehab facility for the attack.

Sharon later described the incident, saying: ‘There was a really bad atmosphere in the house, very hostile.

‘I knew that something was going to happen. He came down in his underpants, sat on the sofa right opposite me and said, ‘We’ve come to a decision – we’re very sorry but you’re going to have to die, there’s no other option.’ 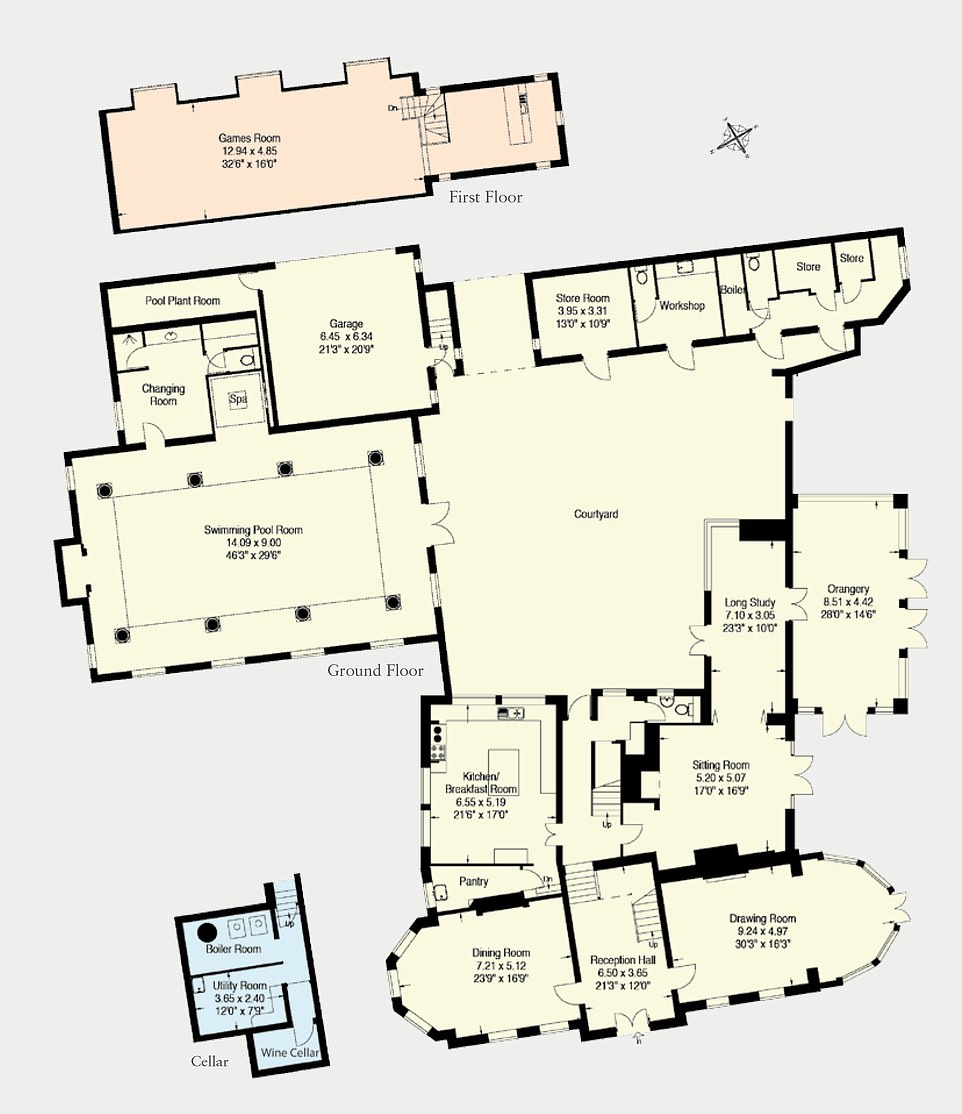 The luxury property comes with a dining room, a drawing room, a spacious kitchen room, a large courtyard and a reception hall

‘He jumped on me and his whole body weight was on top of me.

‘He had his hands around my neck, he landed on top of me, I just kept thinking ‘the kids, the kids, you cannot do this, I’m not ready.’

The X Factor judge managed to press a panic button in their home, and when she came to, her husband had disappeared, and the police were there.

‘I knew that I couldn’t reach him because he was so far gone,’ she added.

‘There was nothing I could have said or done because he wasn’t there. It was someone else.’

Ozzy was arrested and then completed six months in a rehab facility while Sharon decided whether or not to leave him.

He later remembered the incident, saying: ‘I felt the calmest I had ever felt in my life. I was just peaceful. It’s not exactly one of my greatest achievements.’

After Ozzy’s attack the Osbournes put the house on the market for £1.75million in 1991.

Following that, politician and chat show host Robert Kilroy-Silk owned it from the 1990s onwards, selling it in 2014 for a staggering £6.5million.