Grandfather smoked crack cocaine before smashing into car and depot

Grandfather bus driver, 62, on crack cocaine smashed into car carrying one-year-old baby then smashed into depot after he hit accelerator instead of brake

A bus driver had smoked crack cocaine when he smashed into a car carrying a baby and a depot, a court has heard.

Anderson Worrell, 62, has been sentenced to 30 months prison after pleading guilty to causing serious injury by dangerous driving and two counts of drug driving at Croydon crown court on Thursday.

On November 11 last year, the grandfather had stepped on the accelerator instead of the brake, crashing into the back of a car with a one-year-old baby in West Croydon, The Evening Standard reported.

The 198 bus then swerved off the road and collided into a depot, narrowly missing a woman walking by as seen in CCTV footage. 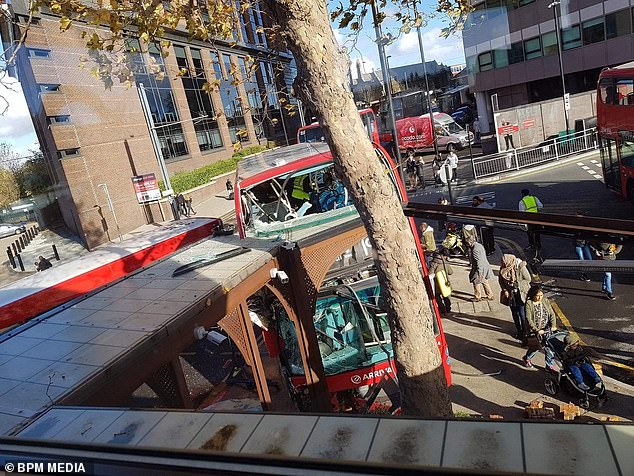 Bus Anderson Worrell, 62, has been sentenced to 30 months prison after stepping on the accelerator instead of the brake, crashing into the back of a car with a one-year-old baby in West Croydon after smoking crack cocaine the night before

The court heard four children and a woman who was six-months-pregnant were among the 12 passengers injured in the crash.

A 15-year-old schoolgirl, who sat on the top deck, suffered a broken arm, punctured lung and ruptured liver, while a seven-year-old boy fainted after he was hit on the head by the shattering window.

One of the survivors Albert Kittoe, 36, told the court the crash has left him panic attacks and the fear of riding the bus.

Worrell, who had smoked the crack cocaine the night before his shift, was seen struggling to stay awake at the wheel before the collisions.

Judge Elizabeth Smaller said: ‘Although you were not experiencing a high from the crack cocaine which you had taken at the time of driving, it would have deprived you of sleep the night before and the after-effects the next day would include tiredness.

Worrell, from Thornton Heath, told the court he had a perfect bus driving record and had smoked the drug to help cope with his depression and cancer diagnosis.

In addition to 30 months jail time, he has been banned from driving for three years and must retake his bus driving test. 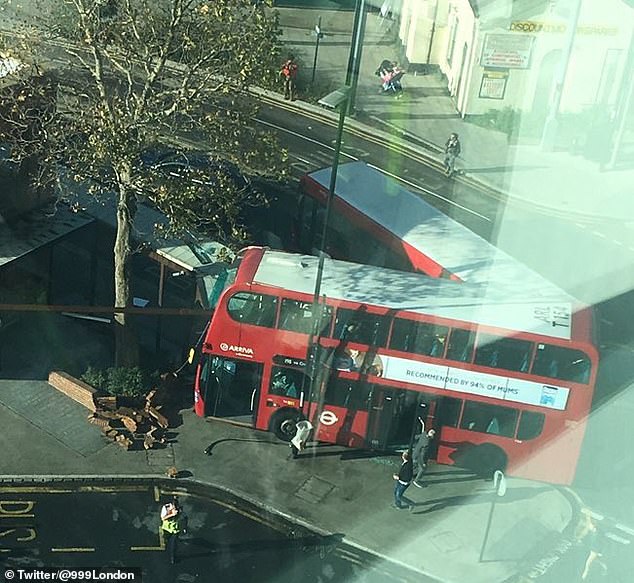 The court heard four children and a woman who was six-months-pregnant were among the 12 passengers injured in the crash (pictured: the crash scene)

Andrew Ramsubhag, prosecuting told the court experts ‘concluded the immediate cause of the accident was foot misplacement on the accelerator’.

Jonathan Storer, from the CPS, said: ‘As a bus driver Anderson Worrell had responsibility for the safety of his passengers. But just hours before, he had spent the evening smoking crack cocaine and was visibly tired during his shift.

‘Twelve people on board were injured as a result of his actions, including a teenager who spent over three weeks in hospital and a seven-year-old who was knocked unconscious by the impact of the crash.

‘This collision would have been terrifying for all those on the 198 bus and could have resulted in injuries that were far more serious or even fatal.”