A great-grandmother born just months after the Titanic set sail has celebrated her 107th birthday.

She turned 107 last week when she revealed her secret to long life – cleaning every single day.

The former cleaner has only just started using a walking stick and zimmer frame and was doing keep fit classes until she was 98.

Surrounded by family and friends she said cleaning is what keeps her going, adding: ‘no one’s worked harder than me’. 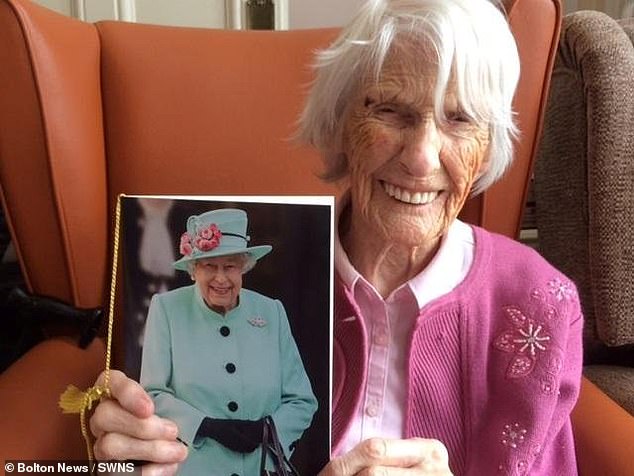 Annie Roberts, from Salford, has celebrated her 107th birthday and says the secret to long life is cleaning every day. She is pictured with the telegram from the Queen she received on her 100th birthday

Mrs Roberts was a cleaner for her whole working life and didn’t stop dusting and polishing when she got home from work, according to her son Charles, 65.

He said: ‘She worked as a cleaner straight from school and it’s all she ever did.

‘She was up and down the house doing this and that non-stop. The house was always really clean but it wasn’t always a good thing.

‘I worked as a policeman and I remember getting home from night shifts and going to bed only for my mum to burst in and tear the sheets off.

‘Every Friday without fail she would clean the sheets, even if I was in them. We lived in a block of flats and she would even go out and clean everyone’s steps and bins.’

Charles, who is retired, said: ‘I think cleaning did keep her active. I’m sure that’s played a part in her living to such an old age.’

Mrs Roberts was born in Salford, Greater Manchester, on June 20, 1912, and lived there until her husband Ernest died in 1988.

Now suffering from vascular dementia, she lives at The Clough Residential Home in Bolton.

Her son Charles and daughter Elaine make regular visits to the home.

Although not a fan of television, Annie loves listening to Nat King Cole and Matt Monro and eating marshmallows and Turkish Delight.

According to a gipsy fortune teller who she saw several decades ago Annie can look forward to living to the ripe old age of 113.