It is one of the most famous crimes in British history.

The Great Train Robbery of 1963 made some of the men who carried out the £2.6million heist household names, including the notorious Ronnie Biggs.

But whilst 12 men were either jailed or fled, three individuals eluded police. Two, Harry Smith and Danny Pembroke, were later unmasked, but the third remained unidentified.

Club owner Billy Ambrose, who had previously spent time in prison for fraud and robbery, was investigated as part of a 1976 cold case review into the Great Train Robbery.

One file from the review shows an identikit image bearing striking resemblance to Ambrose that was compiled with the help of witnesses after the robbery.

Ambrose was also an associate of the robbery’s mastermind Bruce Reynolds, along with other robbers Ronald ‘Buster’ Edwards and Jimmy White.

However, after Ambrose was acquitted in a separate fraud case, the cold case review was dropped in 1978 and no charges were brought.

When he died in 2009, the criminal was living in sheltered accommodation. 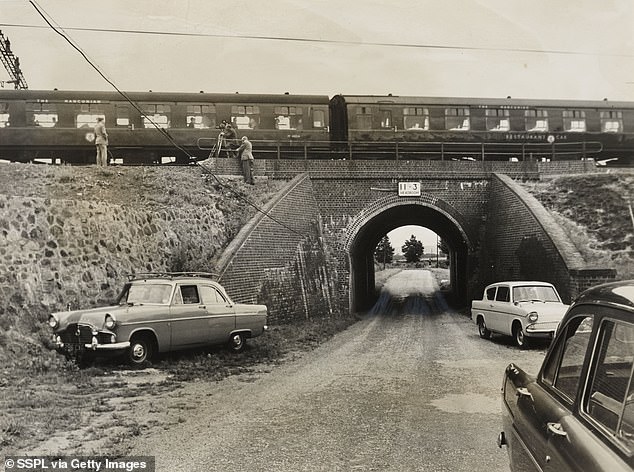 It is one of the most famous crimes in British history. The Great Train Robbery of 1963 made some of the men who carried out the £2.6million heist household names. Above: The crime scene following the robbery at Bridego Bridge in Leighton Buzzard 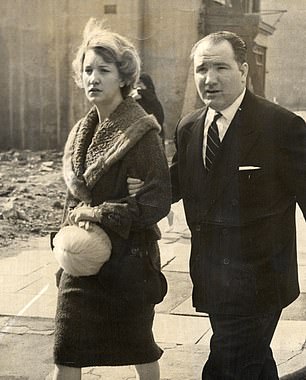 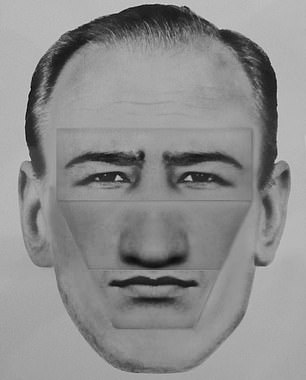 Mr Cook was given access to documents from Scotland Yard’s cold case review, which was carried out in secret.

The 1963 raid was carried out by a 15-member gang on a Royal Mail train heading from Glasgow to London in 1963. The gang stole the equivalent of around £55million today.

Biggs was among the nine who were jailed the following year but he only served 15 months before escaping from Wandsworth prison.

He famously spent the next 36 years on the run, settling down in countries including France, Australia and Brazil

Former boxer Ambrose’s legitimate fighting career came to an end in 1952 after he was fined for receiving stolen goods. 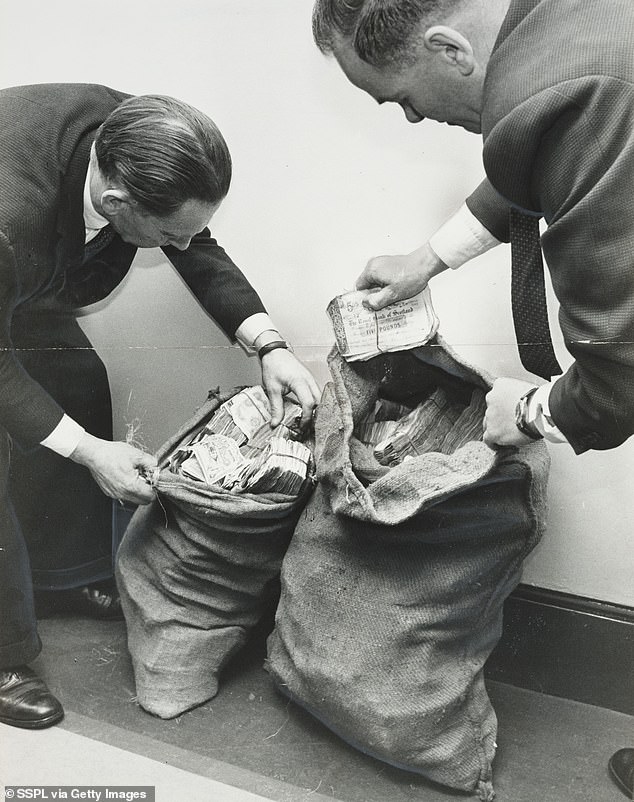 The 1963 raid was carried out by a 15-member gang on a Royal Mail train heading from Glasgow to London in 1963. Above: £50,000 that was recovered by police after being left in a phone box in Southwark by Harry Smith 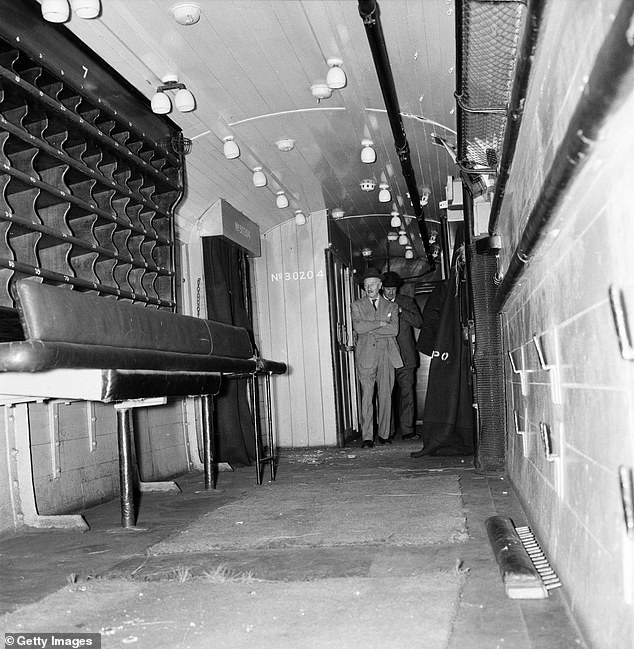 The interior of the train is seen above after the daring raid. The gang stole the equivalent of around £55million today 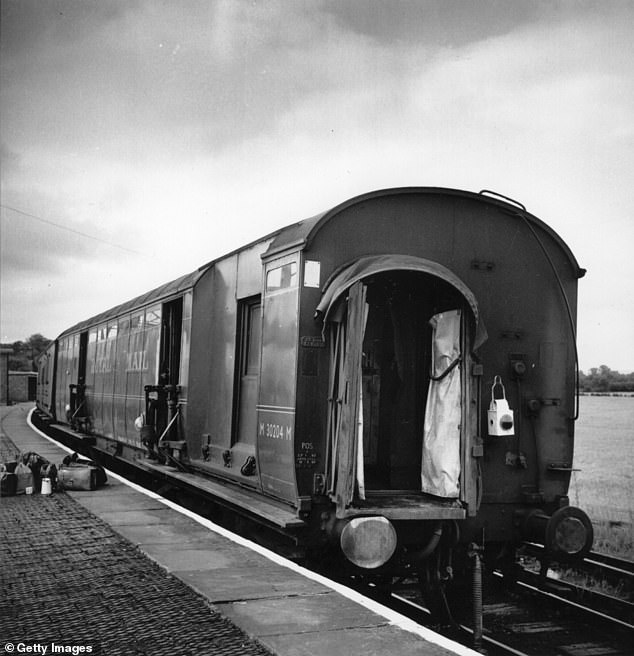 He was then convicted of a violent robbery and jailed for five years. While in prison, he briefly escaped but was recaptured.

After being released, he opened the Pen Club drinking venue in London’s East End.

He made headlines in 1960 when he was shot in the stomach inside the club. Another man who was also shot, Selwyn Cooney, died.

A year after the Great Train Robbery, Ambrose was arrested over a different fraud in Paris. He spent 18 months in prison.

The Met’s suspicion fell on Ambrose after he was arrested with 13 others over a 1976 bankers’ draft fraud.

He had been on a list of suspects drawn up the week after the 1963 raid, but then dropped off the tally. 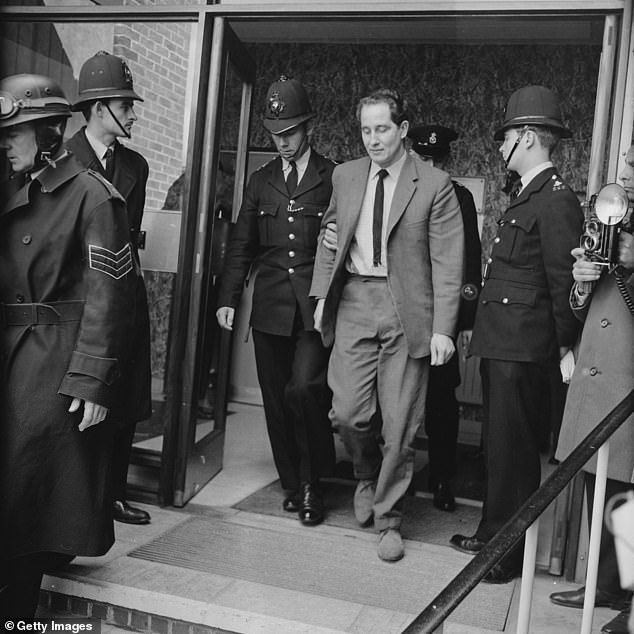 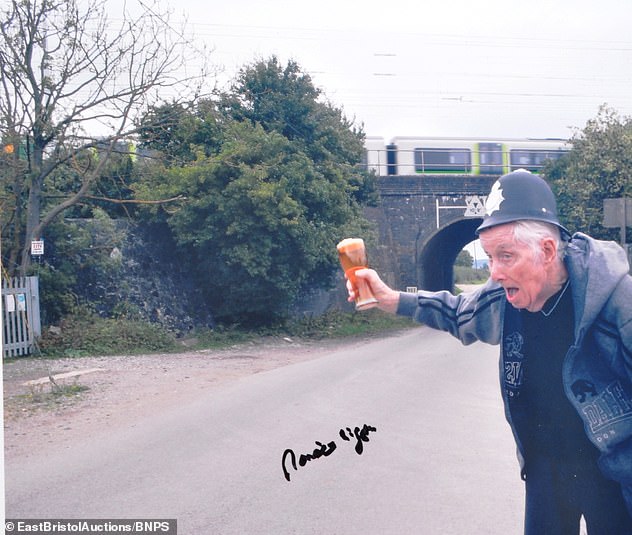 When the police’s 1976 cold case team – who were part of newly-formed anti-corruption unit A10 – began investigating him for any possible role he may have played in the robbery, details of his previous conviction were initially missing and were only turned up by Interpol.

At the time, Ambrose was a wealthy man and was living in a large home in Surrey. 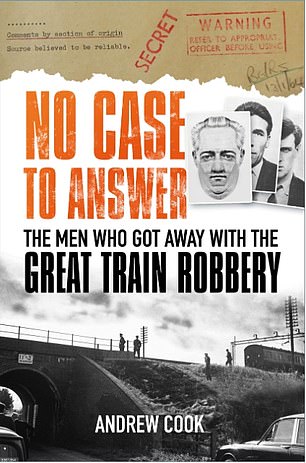 No Case to Answer: The Men who Got Away with the Great Train Robbery, by Andrew Cook

Other evidence that linked Ambrose to the 1963 robbery came from the father of Smith, who told detectives: ‘I’ve heard Harry and his mates Jimmy and Billy were involved.’

The identikit image matching Ambrose’s appearance was compiled after a similar man was seen by two witnesses near the Great Train Robbers’ Leatherslade Farm hideout.

This evidence matched the description given by mail sorter Stanley Hall of a round-faced robber who was seen uncoupling the locomotive from the rest of the train.

The only other round-faced member of the gang, Edwards, had been elsewhere during the raid.

Also revealed in intelligence reports was a suggestion that Ambrose had bought property through a former officer in the Nazi SS, Otto Skorzeny.

Skorzeny was suspected of laundering cash for several of the train robbers.

Despite the evidence suggesting Ambrose may have been involved in the Great Train Robbery, the Met’s cold-case review was dropped in 1978 when the club owner was acquitted at the Old Bailey of the bankers’ draft fraud.

Legal fees hit the convicted criminal hard and he lost his fortune. He died in sheltered accommodation in 2009.

‘CRIME OF THE CENTURY’: WHAT HAPPENED TO THE GREAT TRAIN ROBBERS?

Gang-leader and mastermind Reynolds was nicknamed ‘Napoleon’ and after the Great Train Robbery he fled to Mexico on a false passport and was joined by his wife, Angela, and son, Nick. 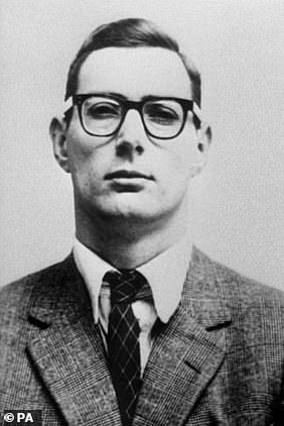 They later moved on to Canada but the cash from the robbery ran out and he came back to England.

Five years after the heist, in 1968, a broke Reynolds was captured in Torquay and sentenced to 25 years in jail.

He was released on parole in 1978 and moved, alone and penniless, into a tiny flat off London’s Edgware Road.

In the 1980s he was jailed for three years for dealing amphetamines.

After his second release, Reynolds went on to work briefly as a consultant on a film about the robbery, Buster, and published the Autobiography of a Thief in 1995. His son Nick said his father died in his sleep in the early hours of February 28 2013.

Ronald Arthur ‘Ronnie’ Biggs played a minor role in the robbery, but his life as a fugitive after escaping from prison gained him notoriety.

He was given a 30-year sentence in 1964, but he escaped after 15 months by fleeing over the walls of London’s Wandsworth prison in April 1965.

After having plastic surgery, he lived as a fugitive for 36 years in first Australia then Brazil, where he fathered a son Michael.

His health deteriorated in 2001 and he returned to the UK voluntarily where he was sent back to prison.

He was finally freed in 2009 on ‘compassionate grounds’ by then Justice Secretary Jack Straw who said he was not expected to recover. He died in 2013. 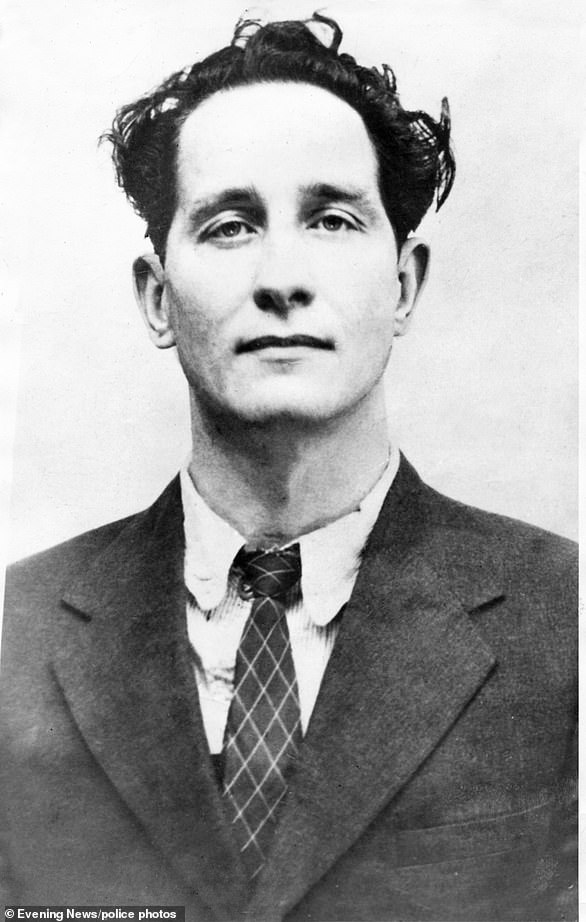 Ronald Arthur ‘Ronnie’ Biggs played a minor role in the robbery, but his life as a fugitive after escaping from prison gained him notoriety

An ex-boxer, club owner and small-time crook who fled to Mexico after the heist but gave himself up in 1966.

Edwards is widely believed to be the man who wielded the cosh used to hit train driver Jack Mills over the head.

Edwards served nine years in jail and then became a familiar figure selling flowers outside Waterloo station in London.

He was the subject of the 1988 film Buster, in which he was played by Phil Collins.Edwards was found hanged in a garage in 1994 at the age of 62. Two wreaths in the shape of trains accompanied his funeral cortège.

Wilson was the gang’s ‘treasurer’ who gave each of the robbers their cut of the haul. He was captured quickly and during his trial at Aylesbury Crown Court in 1964 earned the nickname ‘the silent man’ as he refused to say anything.

He was jailed for 30 years but escaped after just four months.

He was captured again in Canada after four years on the run and served 10 more years in jail.

He was the final train robber to emerge from prison in 1978.

Wilson moved to Marbella, Spain, where he was shot and killed by a hitman on a bicycle in 1990. 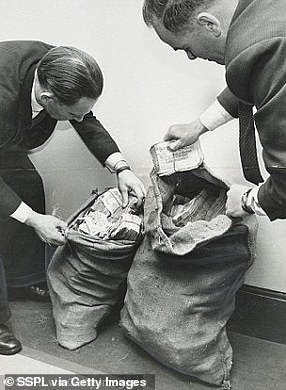 A silversmith and racing driver, James dreamed of investing his share of the loot in new car technology.

He was nicknamed ‘Weasel’ and was the chief getaway driver.

James left a tell-tale fingerprint at the gang’s farm hideout after the heist and was caught following a chase over rooftops in London.

Jailed for 30 years, he served 12 and later sold silver from a market stall before moving to Spain.

James was jailed again for six years in 1993 after shooting his wife’s father and hitting her with a pistol.

He died at the age of 62, soon after getting out of prison.

A crooked solicitor who the gang used for the conveyancing when they bought the farm hideout used after the heist.

Field was arrested and sentenced to 25 years, which was later reduced to five.

An engineer who was arrested with Roger Cordrey in possession of £141,000.Reynolds said he had never heard of Boal. He claimed Boal was not involved in the robbery and was ‘an innocent man’.

Boal was charged with receiving stolen goods and jailed for 24 years, which was reduced to 14 on appeal.

A bookie and self-confessed ‘heavy’ whose job in the heist was to frighten the train staff.

Wisbey was sentenced to 30 years and released in 1976.

He was jailed for another 10 years in 1989 for cocaine dealing and later ran a flower stall.

Tommy died in 2017 after suffering a stroke in his London care home, aged 86.

A nightclub owner who was sentenced to 30 years in jail and was released in 1976.

He was later left crippled after an operation on his leg went wrong.

After jail he became a car dealer and gambler in London. He attended Bruce Reynolds’ funeral earlier this year.

He is the last remaining member of the gang.

He was served 12 years of a 30 year sentence and was released in 1975. He is believed to have been the mastermind behind the infamous train heist.

In 1975, he moved to Spain to run a beach-side bar called Kon Tiki in Mojácar, Almeria. He died in 2016 aged 86 after suffering from a heart attack. 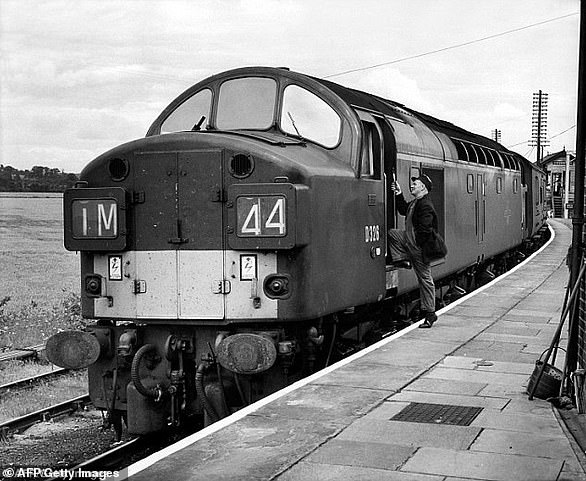 A decorator known as ‘Big Jim’ who was sentenced to 30 years and released in 1975.

Hussey later worked on a market stall and then opened a Soho restaurant.

He notched up a conviction for assault in 1981 and in 1989 was jailed for seven years for a drug smuggling conspiracy with fellow train robber Wisbey.

Part of the South Coast Raiders gang, Cordrey was a florist.

He was arrested in Bournemouth after having the bad luck to rent a lock-up from a policeman’s widow.

He was jailed for 20 years, which was reduced to 14 on appeal.

When he was released in 1971 he went back to the flower business and moved to the West Country. He has since died.

A former Paratrooper described as ‘quartermaster’ for the robbery.

White was on the run for three years before being caught in Kent and sentenced to 18 years.

He was released in 1975 and went to live in Sussex. He has since died.

A former merchant seaman, Field was sentenced to 25 years, which was later reduced to five.

He was released from jail in 1967 and went to live in north London. Believed to be dead.

A solicitor who was sentenced to three years for conspiring to pervert the course of justice. He was released in 1966 and went to live in Surrey. Believed to be dead.