Home » World News » Hard hat? Check? Hi-vis? Check: Dan Andrews is back and combative as ever

Hard hat? Check? Hi-vis? Check: Dan Andrews is back and combative as ever

Premier Daniel Andrews is back, spruiking his signature Metro Tunnel project in a hard hat and high vis as though he has never been away. He boasted, as he had many times before, that “this is the biggest public project in our state’s history”.

For his first media conference after four months recovering from a serious spinal injury, the Premier was as combative as ever, lashing the “wicked and vile” rumours that circulated following his fall in March. None have been substantiated. 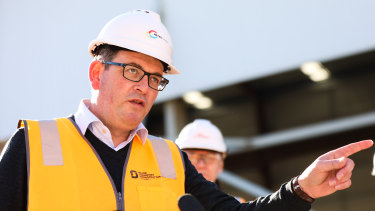 Victorian Premier Daniel Andrews speaks at a media conference after returning to work for the first time since fracturing his spine.Credit:Getty

Mr Andrews, who fronted 120 consecutive press conferences during last year’s lockdown, has been absent since March 9 after he slipped on wet stairs at a holiday home in Sorrento, breaking several ribs and fractured his T7 vertebra.

He looked as fit as he claimed and rejected any suggestion that he would shift his leadership style after his forced sick leave. He was scathing about politically-motivated attacks surrounding the circumstances of his fall.

“What fed those rumours is nothing I’ve done. What fed those stories is the vile, wicked nature of the people who’ve put them around,” he said.

“People who make up their own facts, you’re best not really to get into an argument with them. It’s very difficult to win those arguments.”

“People know me, they know my work, they know my background. They know that I love my family and I love my state. Never get into an argument with a fool. That never works.”

The father of three said the relentless rumours had led to his children being taunted at school.

“It is very hurtful when you see some of this stuff printed. And I’m not speaking for myself. I’m speaking on behalf of my family.”

Mr Andrews, who turns 49 next week, revealed key details about the events leading up to the moment he slipped on wet stairs as he prepared to return to work after the Labour Day long weekend.

The Andrews family had rented a private holiday home in Sorrento via a holiday rental agency for one week, he said, and arrived at the property on the afternoon of Friday, March 5.

It was a family weekend, and he was there with his wife, Catherine, and two of his children, Grace and Joseph. His eldest son, Noah, was “on and off, back and forth” at the holiday home.

The plan was for Catherine to work from the holiday rental for a few more days with the children, while the Premier was to return to work on Tuesday, March 9. He said he had planned to pick his children up from the property on Tuesday night because they were due back at school on Wednesday.

On the Tuesday morning, Mr Andrews was up early, planning to leave Sorrento at 6.30am to travel to his Mulgrave home to have a shower and change into work clothes ahead of an Indigenous announcement in Healesville at 9am.

“It was just one of those things that can be incredibly unlucky. The step was wet, as I said, briefcase in one hand, an overnight bag in the other, I’ve taken a couple of steps on the porch, then I’ve gone on to the first step of only two steps, I think might be three – very short distances – instead of my foot being planted on that step, it simply slid off.”

The fall felt like “slow motion”, he said and he knew it was going to be a significant injury.

“The sound of it, it is sickening and I will never forget it, and I wouldn’t wish it on anyone.”

Details about the Premier’s condition were scant at the time, but he rejected that the initial lack of detail had fuelled rumours and conspiracy theories about how he fell and who he spent time with that weekend.

In response to questions about what he had been doing on the Monday night of that long weekend, he said: “I had not seen anyone, it had not been a late night in the sense I think you’re referring to.”

Mr Andrews released a slickly produced video on social media on Sunday night in which he explained the circumstances of the incident. He said the people who produced it were his staff and that they had “some competency” based on the fact that “about a million” people engaged with his Facebook feed.

The Premier insisted again that he would not be quitting ahead of next year’s election. He did not spend the past four months in rehab to recover only to leave politics, he said.

“We’re getting fit and healthy to get back to work.”

If the Labor leader wins the next election, he will have his statue installed at 1 Treasury Place alongside Albert Dunstan, Henry Bolte, Rupert Hamer and John Cain Junior – an honour reserved for leaders who have serve more than 3000 days.

But the Premier wants his legacy to be his big build infrastructure project, which he hopes will be remembered long after the controversies of the coronavirus pandemic.

“When we talk about legacy, it’s not just about more trains more often – as important as that is – it’s not just about a public transport system where you don’t need a timetable … it’s also about legacy around skills development and having every worker across the state given every chance to have the skills they need to do the job they want to do, and most importantly do the job we need them to do.”