HONG KONG/BEIJING (Reuters) – Tens of thousands joined a somber candlelight vigil in Hong Kong on Tuesday to mark the 30th anniversary of Chinese troops opening fire on student-led democracy protesters in and around Tiananmen Square, as authorities in Beijing went into lockdown.

Demonstrators gathered in the financial hub’s Victoria Park, holding up candles and placards as others rallied next to a replica of the Goddess of Democracy statue, which was erected in Tiananmen Square during the 1989 demonstrations in Beijing.

Nearby, a life-size replica of Liu Xiaobo, the Chinese Nobel Peace Prize-winning political dissident who died in 2017 while in custody, floated in a waterway adorned with flowers.

As tens of thousands thronged Hong Kong for the annual vigil, censors at Chinese internet companies said tools to detect and block content related to the 1989 crackdown had reached unprecedented levels of accuracy.

In the former British colony of Hong Kong, which returned to Chinese rule in 1997 under a “one country, two systems formula” that guarantees rights and freedoms not seen on the mainland, organizers said 180,000 joined the peaceful vigil, filling six football fields.

Police authorities put the turnout at 37,000.

In comparison, authorities in mainland China, where the anniversary remains taboo, deployed a security blanket in and around Tiananmen Square. China has never provided a death toll for the 1989 violence. Rights groups and witnesses say it could run into the thousands.

“It is very important that Hong Kong people continue to remember the June 4 tragedy, and indeed, preserve the memory,” said Richard Tsoi, vice-chairman of the Hong Kong Alliance in Support of Patriotic Democratic Movements of China.

“And don’t let the Chinese authority try to erase the memory for the whole nation.”

Others chanted: “End one-party dictatorship” and “build a democratic China.”

Veteran Hong Kong democracy campaigner and Baptist cleric Chu Yiu-ming who was in his mid-40s when he joined demonstrators around Tiananmen Square in 1989, just before the bloody crackdown, was overcome with emotion.

“I swear, as long as someone suffers and is humiliated, I have to voice it,” he said.

Tourists thronged Tiananmen Square earlier on Tuesday amid tighter-than-usual security, although most visitors approached by Reuters said they were unaware of the bloody crackdown on student-led protests 30 years ago or would not discuss it.

The anniversary of the crackdown is not spoken of openly in China and is not formally marked by the government.

A 67-year-old man surnamed Li, sitting on a bench about a 10-minute walk from the square, said he remembered the events of June 4, 1989, and its aftermath clearly.

“I was on my way back home from work. Changan Avenue was strewn with burned-out vehicles. The People’s Liberation Army killed many people. It was a bloodbath,” he said.

Asked if he thought the government should give a full account of the violence, he said: “What’s the point? These students died for nothing.”

Refinitiv, a company that provides data and news to the financial services industry and was spun-off from the parent company of Reuters last year, has removed some Reuters stories on Tiananmen Square from its subscriber terminals. Reuters says its coverage is not affected.

Among the students’ demands in 1989 were a free press and freedom of speech, disclosure of leaders’ assets and freedom to demonstrate. However, exiled former protest leaders say those goals are further away in China than ever because the government has in the past decade suppressed a civil society nurtured by years of economic development. 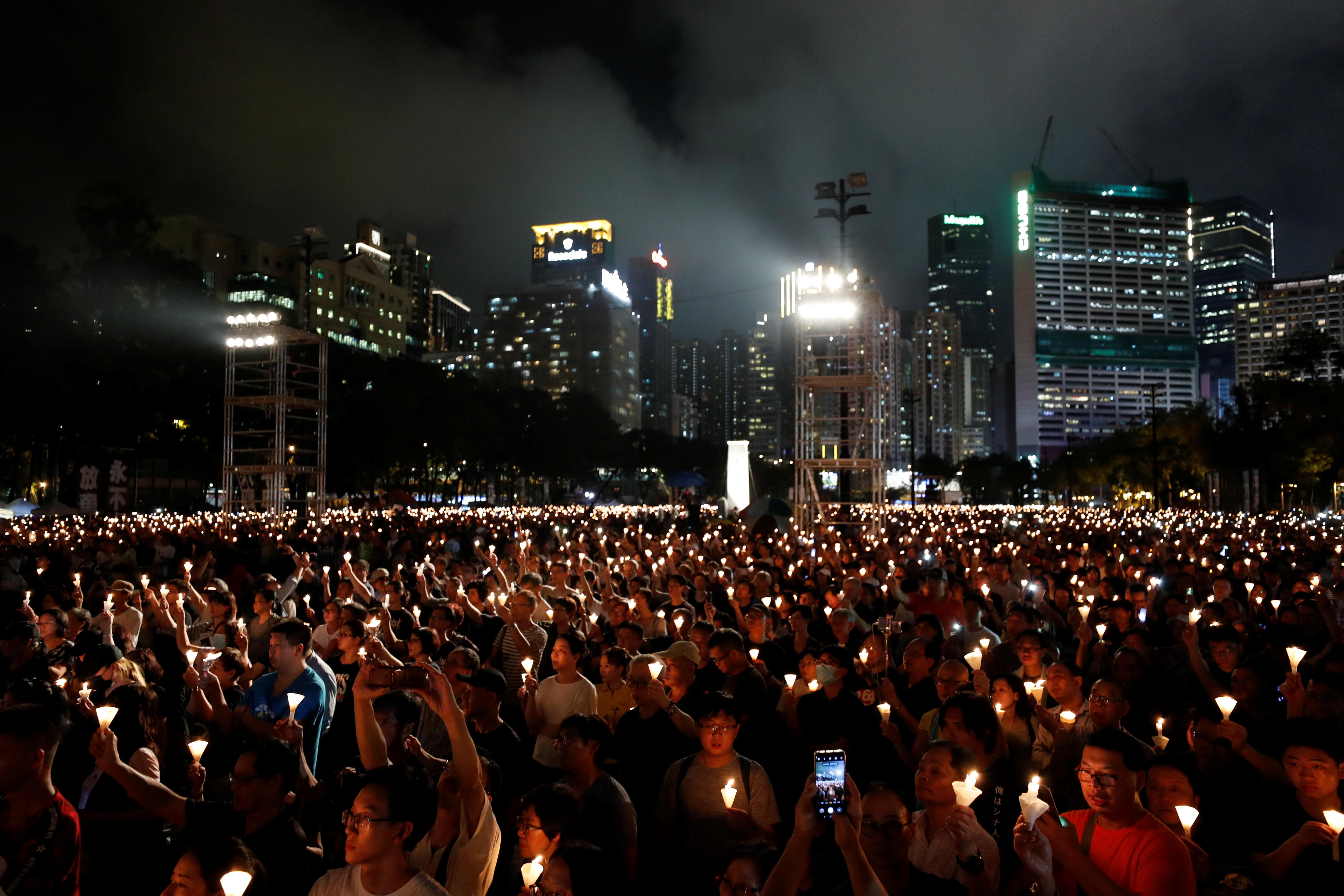 Tiananmen also remains a point of contention between China and many Western countries, which have implored Chinese leaders to account for giving the People’s Liberation Army (PLA) the order to open fire on their own people.

China’s foreign ministry denounced criticism by U.S. Secretary of State Mike Pompeo, who called for China to release all political prisoners and offered his salute to “the heroes of the Chinese people who bravely stood up 30 years ago in Tiananmen Square to demand their rights”.

The vigil in Hong Kong is the biggest on Chinese soil. Smaller vigils are held in the former Portuguese territory of Macau and the self-ruled island of Taiwan, which China claims as its own.

In Taiwan’s capital Taipei, a few hundred people gathered at Liberty Square for an event marked by documentaries, speeches and a dance dedicated to mothers of those who were killed in the Tiananmen crackdown.

“I’m very ashamed. I repent wholeheartedly,” Li Xiaoming, a former PLA officer who participated in the military crackdown told the crowd from a stage in Taipei.

“The reason that I spoke up today is that I don’t want people to forget the events of June 4,” said Li, who is now an Australian citizen, as he burst into tears.

Back in Beijing, hundreds of uniformed and plainclothes police monitored the square and its surroundings, conducting spot ID checks and inspecting car trunks. Thousands of visitors lined up at security checkpoints to enter the square, many carrying tour group flags.

A male tourist in his 30s near the square, who gave his family name as Zhang, said he had no idea about the anniversary.

The United Nations had received reports of detentions, threats and increased censorship ahead of the anniversary, U.N. human rights spokeswoman Ravina Shamdasani said in Geneva. 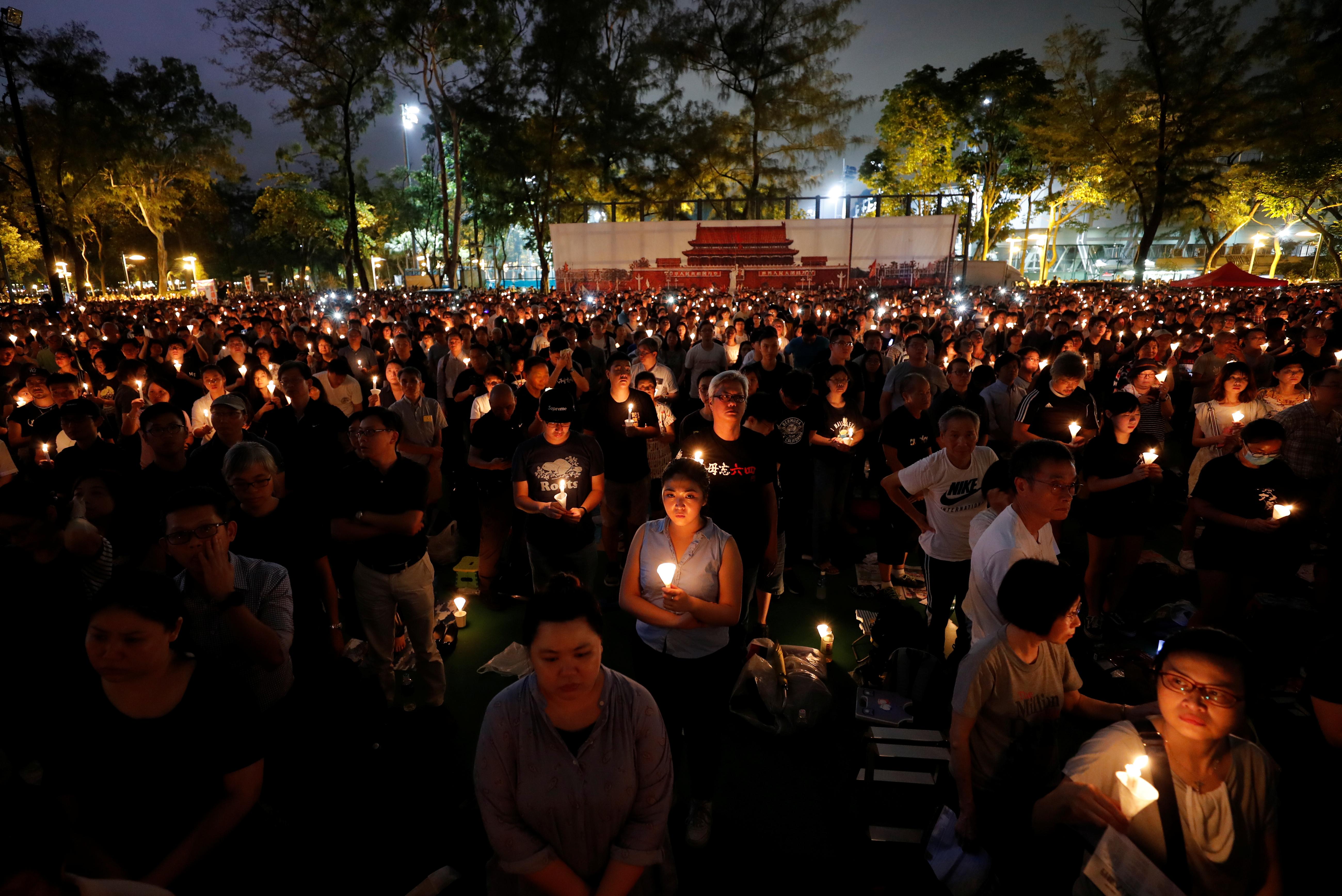 “We have made our concerns known to the Chinese government and we are working to also verify these reports that we have received,” she said.

While the June 4 vigil is an annual event in Hong Kong, it comes at a sensitive time for the city’s leaders this year as they grapple with a backlash at home and abroad over a proposed extradition bill that would for the first time allow fugitives captured in the city to be sent to mainland China for trial.

Critics of the bill plan to protest in Hong Kong on Sunday, with rally organizers calling for 300,000 people to take to the streets.