Hong Kong protesters clash with police on anniversary of handover

Police have faced off with protesters outside the Hong Kong government as it marks the 22nd anniversary of the former British colony’s return to China.

The confrontation took place near a flag-raising ceremony held under high security, ahead of a mass protest later this morning.

Police used riot shields to push back hundreds of demonstrators who had blocked a nearby street.

Hong Kong leaders and guests watched the ceremony inside the city’s convention centre instead of outside as they would usually.

The mass march planned for this afternoon will be the third demonstration in three weeks. The anniversary always draws protests but this year it is expected to be larger than usual because of widespread opposition to recent government actions that have awakened broader fears that China is eroding Hong Kong’s freedoms.

Foreign Secretary Jeremy Hunt has used the anniversary of the handover of Hong Kong to affirm
Britain’s support for the One Country, Two Systems relationship between the autonomous territory and China.

He said a surge of protests in Hong Kong has made it “even more important” to reiterate the UK government’s commitment to Sino-British Joint Declaration, originally agreed in 1984. 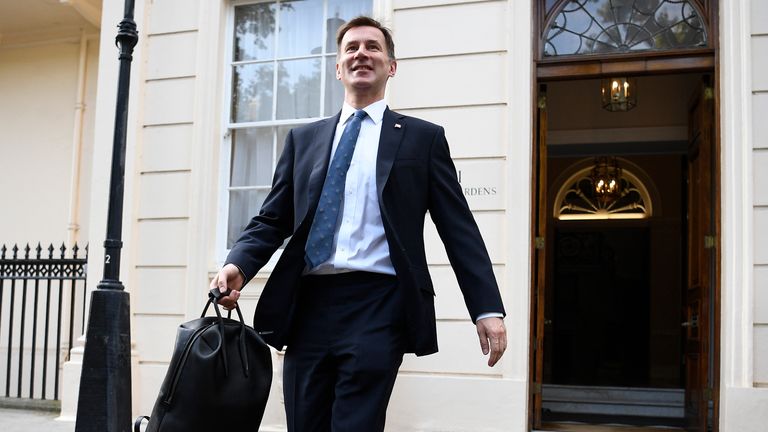 “It is imperative that Hong Kong’s high degree of autonomy, and the rights and freedoms of the Hong Kong people, are fully respected in line with the Joint Declaration and the Hong Kong Basic Law,” Mr Hunt said.

“We have made our position on this clear to the Chinese Government, both publicly and in private, and will continue to do so.”

On Sunday more than 50,000 people rallied in support of Hong Kong police, who have been criticised for using tear gas and rubber bullets during clashes with demonstrators that left dozens injured on June 12.

More than one million people took to the streets in two previous marches in June, organisers estimate.

The Hong Kong government has already postponed debate on the extradition bill indefinitely, leaving it to die, but protest leaders want the legislation formally withdrawn and the resignation of chief executive Carrie Lam.

They also are demanding an independent inquiry into police actions on 12 June.