A SUNDAY footballer has revealed the black wounds left on his feet after a mystery thug poured drain cleaner into his boots.

Jordan Coomes, 24, suffered horrific injuries that had a “burning flesh smell” after a bizarre attacker poured the bleach-like chemical into his muddy Nikes. 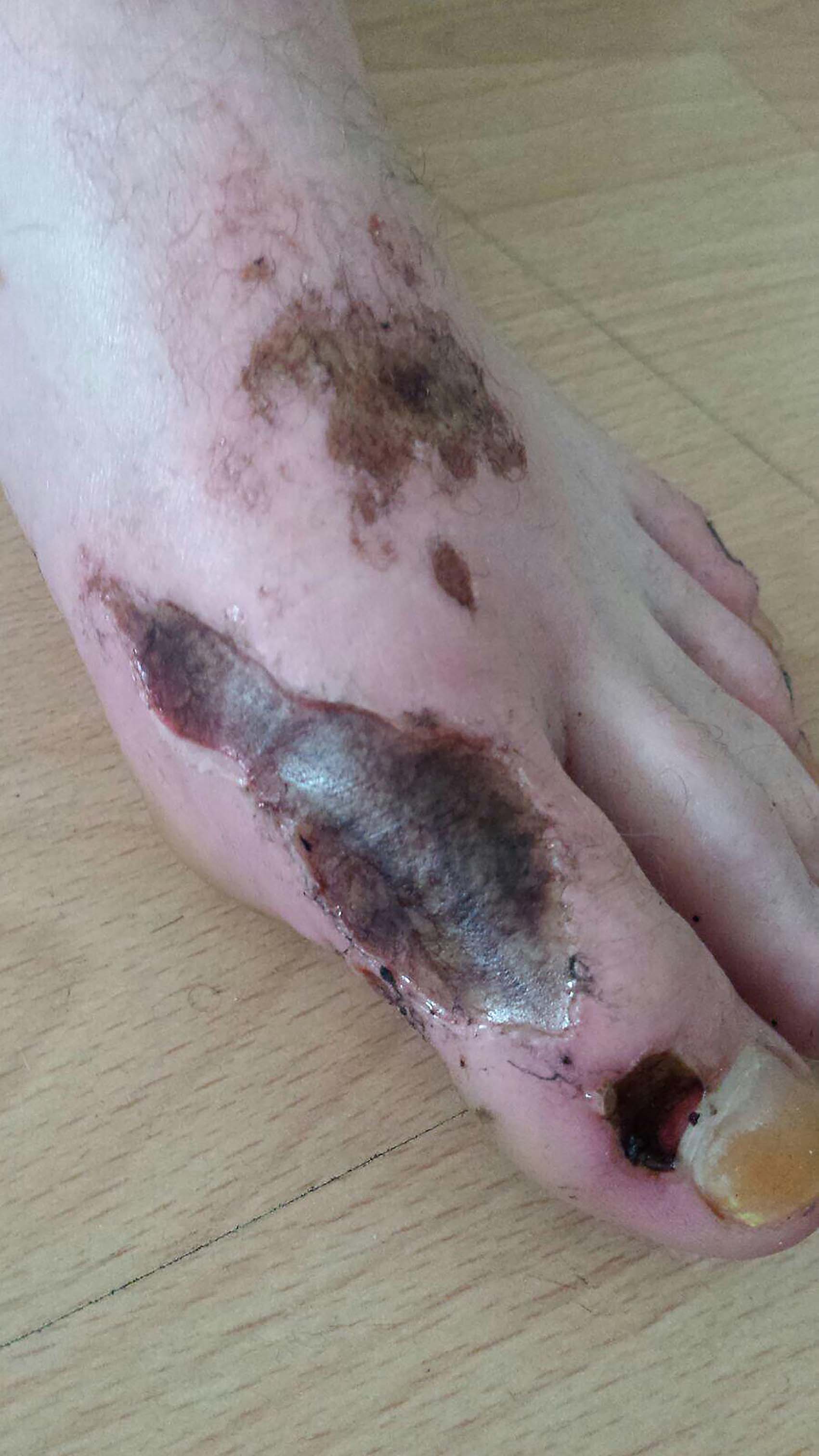 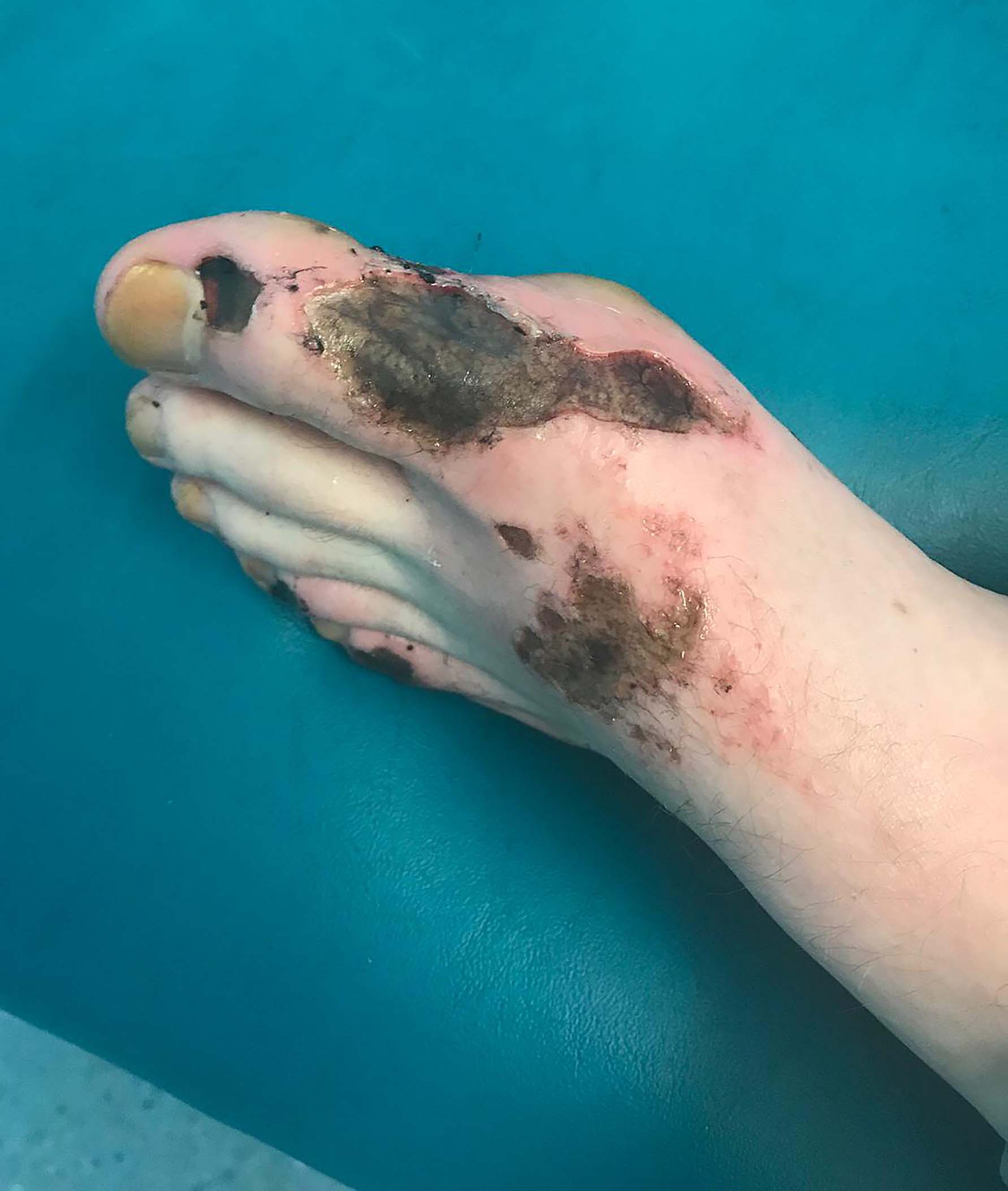 The dad-of-one noticed something was wrong during a match and had to race to the pitchside to pull off the boots where he was stunned to see his feet had turned black.

He was rushed to hospital where medics operated on him to remove the burning flesh and save his feet.

Jordan, of Cheshunt, Herts., said: “It started to feel like there was something on my foot and I thought maybe I had been studded or stamped on.

“It was like a really hard stabbing pain and I tried to carry on and I couldn’t.

"I hobbled to the side, sat down and took my boot and shoe off and saw it was discoloured. 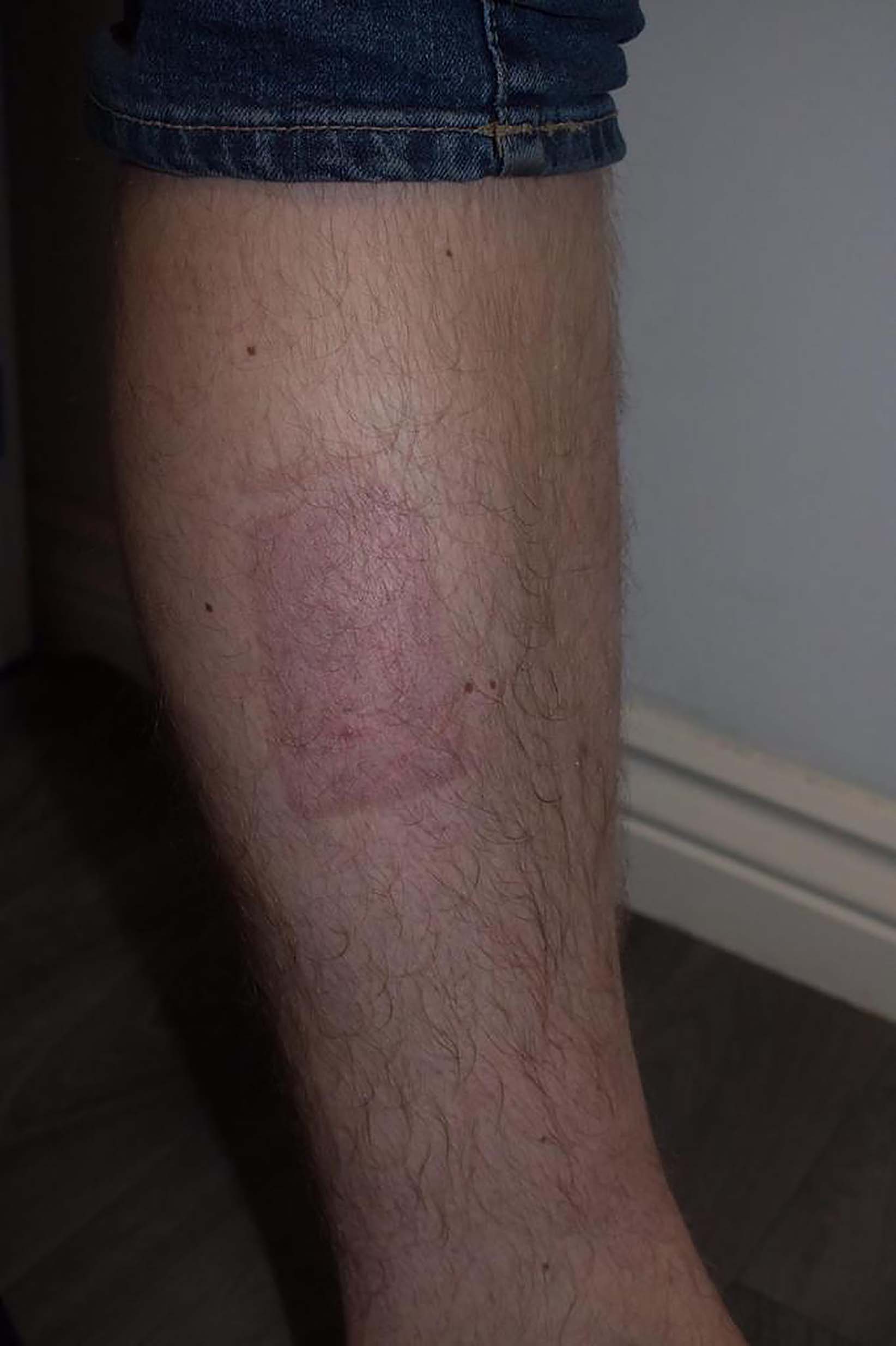 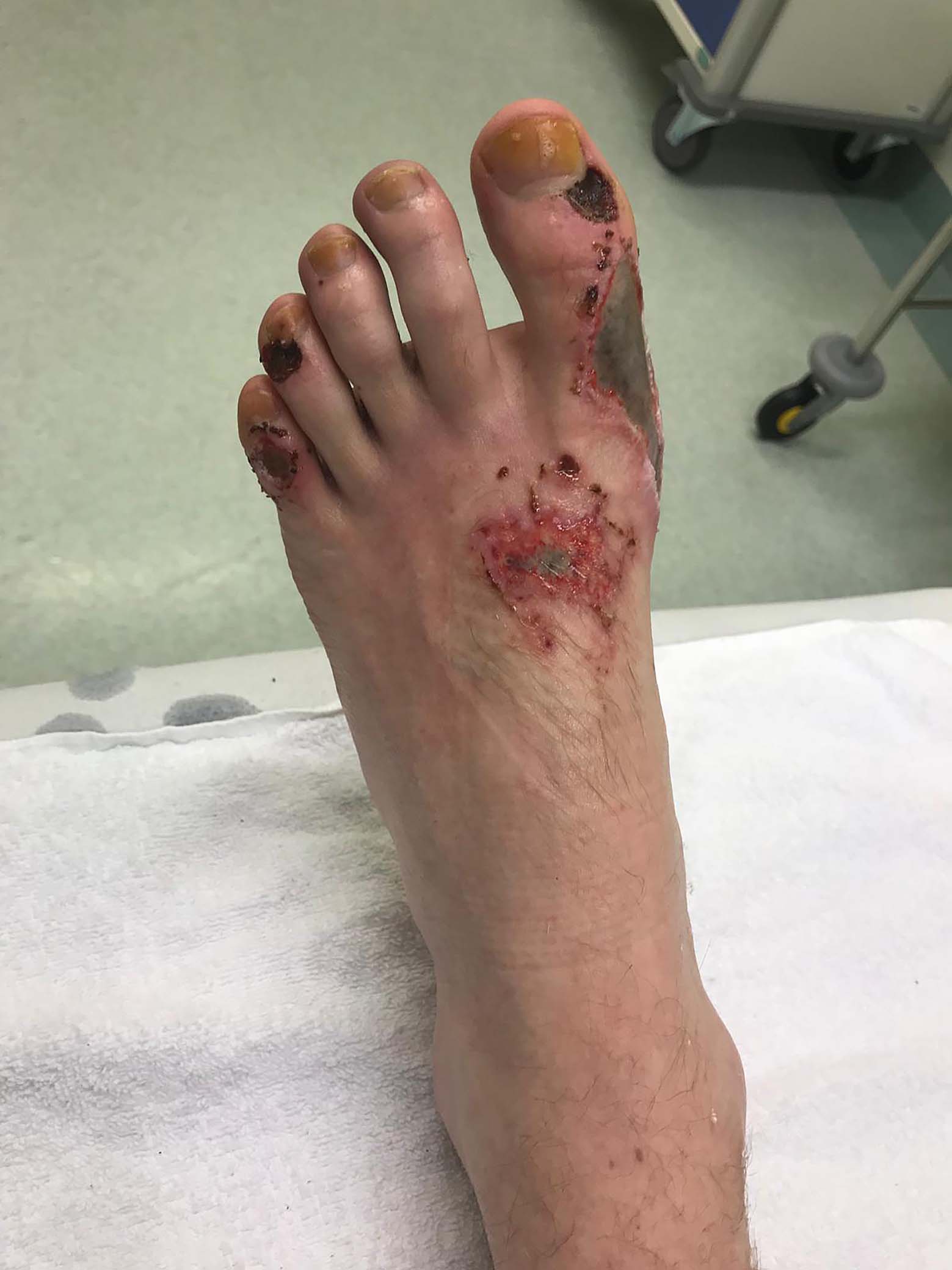 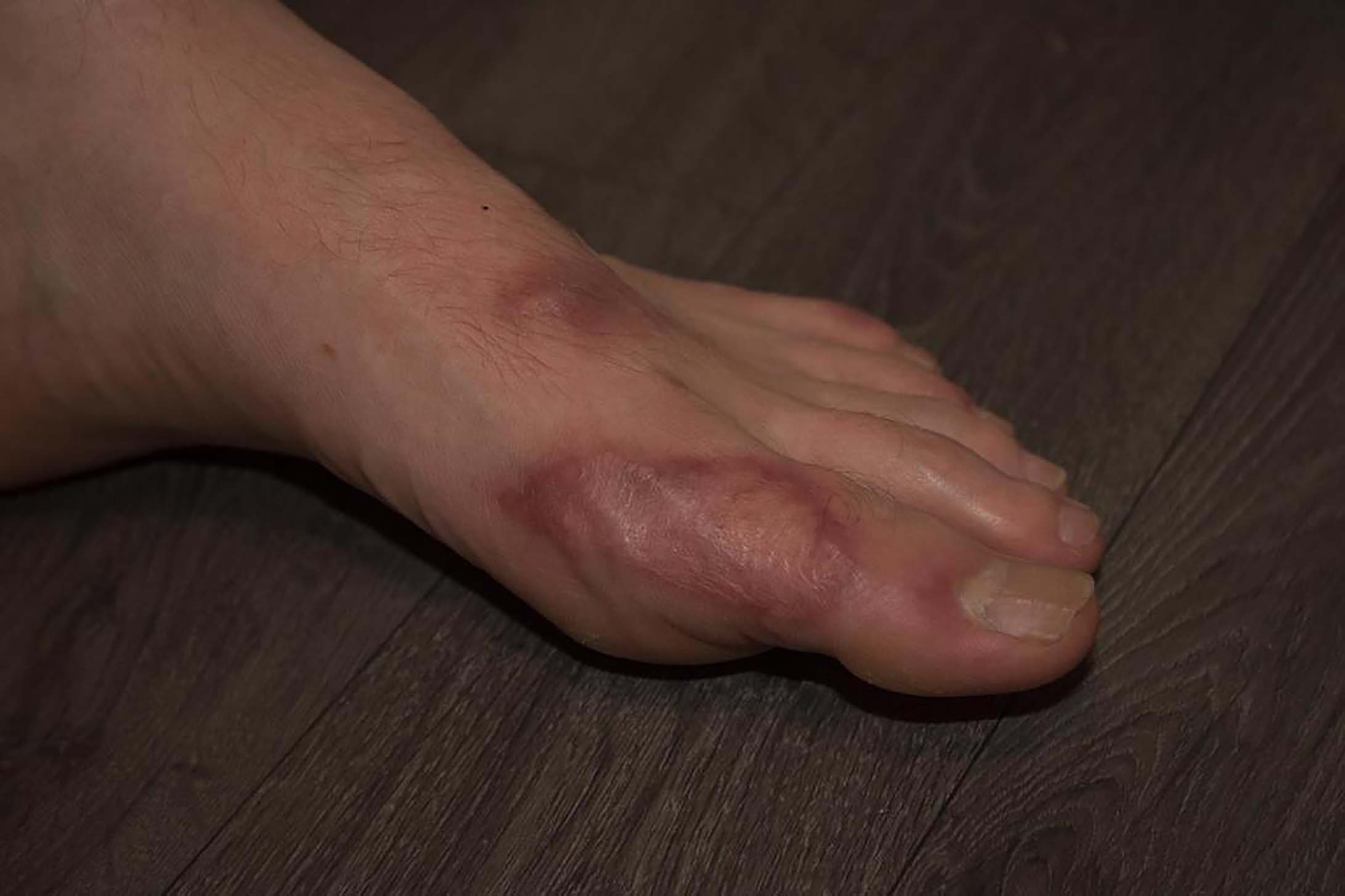 “I just panicked. I thought I might have caught some horrible disease, I can’t describe what it was like to see your foot suddenly stained deep black.”

A pal rushed him home where he went to A&E and they patched him up and sent him home with antibiotics, thinking it was a friction burn.

The next day Mr Coomes limped into work and a pal urged him to go back to hospital who then sent him to a specialist burn unit at Broomfield Hospital, in Chelmsford.

It was there they realised he had been scorched by a chemical attack and it had been eating away at his foot for more than 24 hours.

Shockingly a test found his foot was very alkaline and 11 on the pH scale – skin is normally 4-6.

Jordan said: “When they looked at my feet there they said it had a burning flesh smell coming from it  and took a PH test.

“They took one look at it and said you need a skin graft urgently and two days later I had the operation.”

After the surgery Mr Coombes was off work for two months as he recovered and returned to football.

“Thankfully I have almost fully recovered but I still suffer from it now, if I am on my feet for a long time at work I have to take a few minutes as I just get this dull ache.

“I still can’t believe this happened – everyone leaves their boots outside.

“I had no reason to suspect anything would happen, I just left them outside as they were muddy and this happened.”

The boot-spiking happened in November 2017 after Jordan left his boots outside the flat he shared with his ex-partner after a Sunday league game.

The following Wednesday he grabbed the boots and rushed off with pals to play 5-a-side.

His neighbour was arrested and charged but cleared by a jury – meaning Jordan has no idea who attacked his feet.

He fears it was another local unhappy at the mud left in their flats’ communal area by his boots.