Under a tree in Borroloola, a remote Aboriginal community about 10 hours drive from Darwin where less than half of all children attend school most days, local Garrawa woman Deandra McDinny helps toddlers with jigsaw puzzles.

After delighting in how far they can throw their sunhats in the tree, the children eat a lunch of stir-fried beef and brown rice before singing a local version of Frère Jacques: “Barramundi, Barramundi … cockatoo ….” 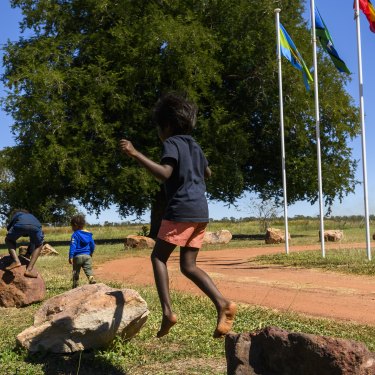 Indi Kindi early childcare is an Indigenous designed and led program that Unicef has decided to support to address disadvantage among Aboriginal children. Credit:Rhett Wyman

Welcome to Indi Kindi, an outdoor walking-learning early years program that travels from the bush to the river and local library. It’s led and taught by local Aboriginal people – and now a review of the Moriarty Foundation’s program has found it has bridged the gap in early childhood education by reaching 80 per cent of Indigenous preschool-aged children in Borroloola and nearby Robinson River on the Gulf of Carpentaria.

A qualified Indi Kindi educator, Ms McDinny said she did it for “the love of the kids, the smiles. They know they are going to learn something”.

Parents said Indi Kindi was “deadly” because the children could speak in any of the five local Indigenous languages, learn Aboriginal culture, including cooking damper and kangaroo tail, at the same time as making them school ready. It also involved local families, provided employment and training, and provide the children with healthcare, including a visit from dentists last week.

For nearly nine years, the foundation – started by former soccer player John Moriarty, who was born in Borroloola and was the first Aboriginal to be selected for a national team – has run programs for preschool and school-aged children in 18 of Australia’s most disadvantaged and remote Aboriginal communities.

These include Tennant Creek and Borroloola, where the average life expectancy is 58 years, not much more than in Somalia. A report by the ABC last year said school attendance by Indigenous students for at least four days a week in some very remote areas had dropped to 14 per cent in 2019. 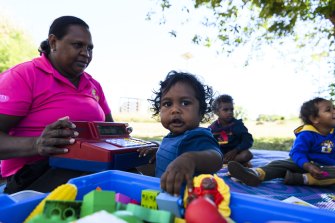 The success of Moriarty’s progams including Indi Kindi have prompted international aid agency Unicef to change its policy in Australia to help other communities in need.

Until this year, Unicef only delivered emergency relief in Australia.

Unicef’s director of Australian programs, Nicole Breeze, said the decision to fund and work in a partnership with Moriarty followed a review last September of child wellbeing in 36 countries.

For most children Australia was a “great place to grow up”, she said, with the results among the top third of rich countries for social, environmental and economic conditions.

But Unicef’s survey found outcomes were poor to middling for many Australian children.

“For Australia’s Indigenous children, this inequality was stark – and entrenched in remote and rural areas,” Ms Breeze said.

Unicef would also lobby the federal government to make a substantial investment in these programs so they could be delivered at scale.

The evidence was clear that if a child got a good start in life it was likely this trajectory would continue, she said. “What we know if children fall behind in first five years of life it is difficult to catch up.”

Ms Breeze said Unicef loved the way the Moriarty programs engaged the local communities and were culturally relevant at the same time as aligning with the federal government’s national early years education framework. 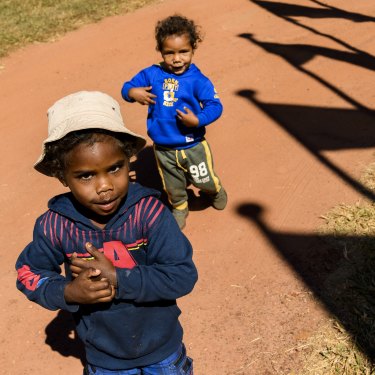 Donston, 4, and Jason, 2, at Indi Kindi in Boorroola. Credit:Rhett Wyman

As a result of the support from Unicef, Moriarty will double the number of preschool children in Indi Kindi from 100 to 200 and expand to Kuranda in Queensland.

It will also double the number of children from 1800 to 3600 participating in John Moriarty Football across Australia. It is operating in Narromine, Peak Hill and Warren in NSW; Mareeba, Gordonvale and Yarrabah in Queensland; and Robinson River, Ti Tree and Ali Curung in the Northern Territory.

School attendance in these remote areas averages about 52 per cent compared with the Australia-wide average of 91 per cent.

Stewart Willey, the program’s community coordinator in Tennant Creek, said children who were involved in “sports were better able to follow routines, attend school and stay out of trouble”.

When they ran vacation programs in Aboriginal communities, it often resulted in those children attending school for the first time the next term.

The co-founder of the Moriarty Foundation, Ros Moriarty, said initiatives that are co-designed within “an authentic Aboriginal world view can shift seemingly intractable disadvantage experienced by Indigenous children”.

Forty-two per cent of Indigenous 4-5 year olds were assessed as vulnerable in the Australian Early Development Census; in the Northern Territory outside of Darwin, this rises to 69 per cent.

Housing in the four town camps was overcrowded, the water was contaminated and toilets and plumbing were failing. When former prime minister Tony Abbott visited Borroloola in 2018, he said the housing was “The worst I’ve seen anywhere in remote Australia”.