In the late 1960s police had no idea how to handle demonstrations because the biggest non-sporting crowds were those lining up for a scone at the Coles cafeteria. Then the first inklings of a protest movement started, and many police and more than a few politicians saw it as a threat to the heart of democracy.

Keith Plattfuss was a no-nonsense Victorian senior cop who thought any man with hair over his collar was a hippy anarchist and any woman who burnt her bra was a lippy arsonist. 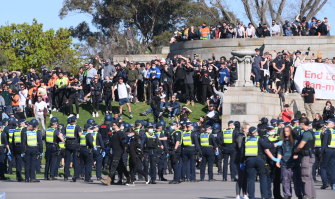 Anti-lockdown protesters face off with Victoria Police at the Shrine of Remembrance in Melbourne on Wednesday.Credit:Eddie Jim

When a ragtag group of demonstrators wandered down Waterdale Road near La Trobe University in 1970 he led a charge into the non-violent crowd, later saying, “They got some baton today, and they will get a lot more in the future”.

Since then, police and politicians have accepted that public protests are part of democracy.

Police tactics, refined over decades, have been simple and largely successful. Hold a line, try to remain tolerant, arrest people as a last resort (it takes four police to handle one offender) and don’t overreact.

This means presenting a non-threatening static line of uniform police to keep the protesters to an agreed path and presenting them with accessible exit points. 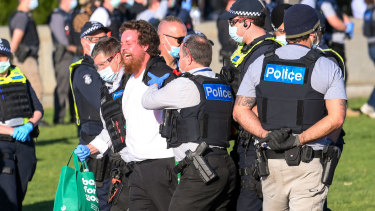 A man is taken away by police at the Shrine of Remembrance. Credit:Eddie Jim

For big and angry protests riot police and horses are often positioned out of sight to be used in an emergency. It is the “Have you say, then on your way,” policy.

COVID-19 and its associated tensions has made that approach as redundant as a boom-box on the beach. After a series of violent clashes between ultra-right and far-left groups more than four years ago police started to train for ugly confrontations, equipping the Public Order Response Team (PORT) to break up crowds with non-lethal weapons.

In the past few weeks police tactics have changed and changed again.

Last month there was a large anti-lockdown demonstration in Melbourne that involved hardcore, angry knuckleheads who wanted to go the knuckle and reasonable, angry people who wanted to be heard.

On Saturday, after public transport to the CBD was stopped, the reasonable people stayed home and the usual suspects turned up. Then police screwed up. They used ordinary tactics for an extraordinary event, keeping back the public order specialists and using general duties police on the front line. The result was chaos leaving many police feeling they had not been supported by senior officers.

Monday’s brawls outside the CFMEU headquarters was not a planned event, and it took police some time to use PORT.

On Tuesday police chose to protect key buildings, including Parliament House, not wanting a Washington-type January attack when Trump supporters stormed Capitol Hill. PORT took the front line with a row of horses behind supported by uniform police. 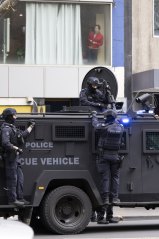 A woman looks on at a police heavy vehicle in the city ahead of protests.Credit:Wayne Taylor

As thousands of building workers, anti-vaccine conspiracy theorists and others with unknown agendas walked around the city, police moved to different positions to protect key spots without attempting to disperse the crowd.

At the end of Tuesday Chief Commissioner Shane Patton warned returning protesters they would face a stronger police approach. While not returning to the Plattfuss line of bringing out the batons, he made it clear you shouldn’t weep crocodile tears if you happened to get tear-gassed.

PORT and the Critical Incident Response Team would take the lead. Heavily armoured vehicles usually dispatched for terrorism incidents were plainly in sight.

Wednesday’s hardcore crowd appeared to have no plan. They wandered around enabling police to employ sheepdog tactics, herding them in one direction.

In a spectacularly stupid move the demonstrators congregated at the Shrine of Remembrance – an act certain to strip any shred of public sympathy.

One side was equipped with shields, horses, capsicum spray, tear-gas and rubber bullets. The other with slogans. The demonstrators were the static line with their backs to a building while police were the mobile force leaving the demonstrators an exit route.

They deliberately left the lid off the toothpaste and then began to squeeze.