How rapid Covid-19 tests at work can reboot the economy

How rapid Covid-19 tests at work can reboot the economy as Bentley, Tata and John Lewis save a fortune with 15-minute swabs for staff

Some of Britain’s biggest firms have prevented thousands of sick days and kept entire factories from shutdowns by rolling out rapid Covid-19 tests for staff.

John Lewis, steelmaker Tata and carmakers Jaguar and Bentley saved hundreds of thousands of pounds after they set up schemes for employees, The Mail on Sunday can reveal.

Business chiefs last night said that the stunning results from the mass workplace checks – which can take as little as 15 minutes – showed they can play a vital role in rebooting the economy.

The MoS today launches a campaign to make Covid tests at work commonplace across the UK and help bring staff back to factories, plants, shops and offices as the vaccine drive gathers pace.

John Lewis revealed it had conducted more than 45,700 tests, with fewer than one per cent of results positive. The retailer, which also runs Waitrose, said it had saved 6,643 working days for 2,286 employees. 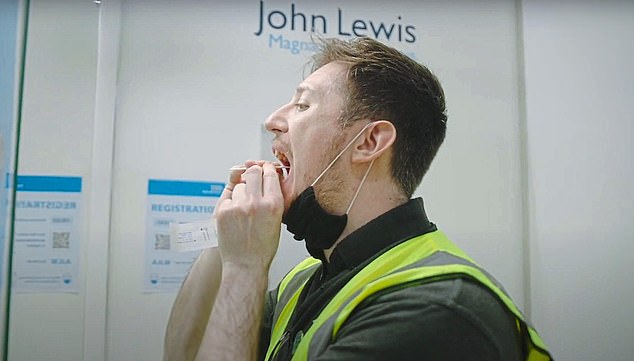 John Lewis, steelmaker Tata and carmakers Jaguar and Bentley saved hundreds of thousands of pounds after they set up schemes for employees, The Mail on Sunday can reveal. Pictured: A John Lewis employee takes a Covid test

It is among the firms taking part in a Government pilot scheme which has so far paid for more than 1.5 million tests across the public and private sectors.

Most firms are testing all staff without virus symptoms several times a week using ‘lateral flow’ tests, which can cost as little as £5 each.

Those who have been in contact with Covid sufferers are allowed to keep going to work – rather than self-isolate – provided they test negative each day for seven consecutive days.

He said bosses had seen ‘lower absence, lower cases, lower spread’. ‘That feels really exciting, if you think about what lateral flow tests … could do for the country at scale.’

Tata Steel said daily swabs had saved it ‘hundreds of thousands of pounds’ and avoided five potential stops in production at its steelworks in Port Talbot, South Wales. 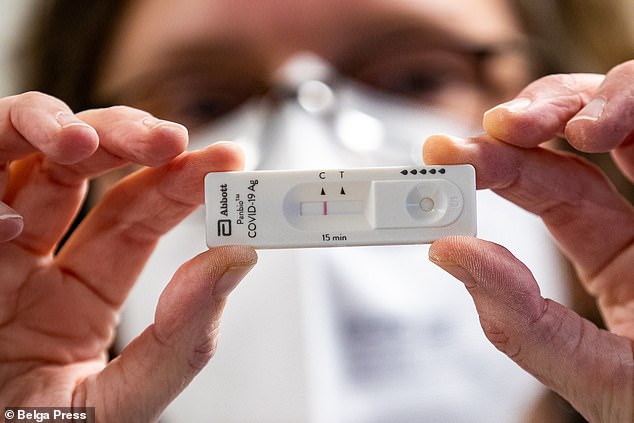 Including the use of mass testing, it has completed 5,627 checks and estimates that 12,500 work hours have been saved.

Dean Magill, head of central operations at Tata Europe, said it would otherwise have been ‘very difficult to run the plant.’ Tata now plans to roll out the scheme to all its 18 UK sites.

Luxury carmaker Bentley has provided nearly 15,000 tests to staff at its factory in Crewe, Cheshire, since May last year and said there had been no proven cases of transmission.

However, research by the Confederation of British Industry shows 87 per cent of businesses are not following suit, citing a lack of expertise and logistical barriers.

The MoS Tests At Work campaign calls on the Government to fund more workplace checks across the UK and launch an official marketing drive to tell businesses how to implement testing.

Baroness Ruby McGregor-Smith, president of the British Chambers of Commerce, said: ‘We are delighted to support The Mail on Sunday’s campaign. Mass testing is crucial to help businesses restart, rebuild and renew, and alongside the vaccines it will help build the economy and keep it open.’

The Department of Health said it wanted as many firms as possible to sign up to ‘ensure vital public and economic services can continue’.

at, COVID-19, How, rapid, tests, wo
Celebrities