How votes in the state election will be counted

At 6pm on Saturday, polls in the 2022 Victorian state election will close and vote counting will begin at centres across the state.

The Victorian Electoral Commission is the agency responsible for counting the votes. VEC officials will work through the night to tally the result of the election. They have warned that a record number of early votes could slow the count. 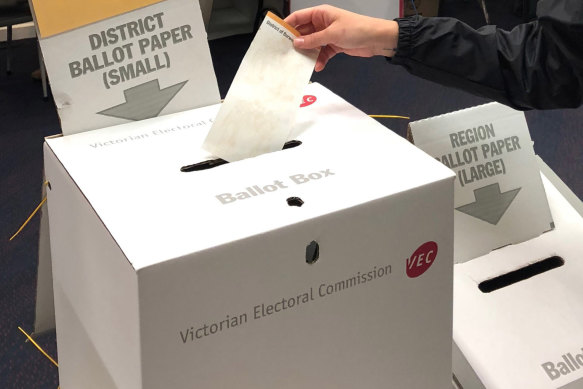 The VEC counts votes in a strict order.

“We’ll be aiming to count 75 per cent of everything that we have on hand over the weekend,” the VEC’s director of communications and engagement, Sue Lang, told ABC radio on Friday. “And from that point on it’ll mainly be absent votes that are sorted to their correct districts being returned and counted next week [and] postal votes that are still coming in [if they’re put in the post by 6pm Saturday night].

This is The Age’s guide on how votes are counted.

What order do the VEC count votes?

The electoral commission counts votes in a particular order. First cab off the rank is the first-preference count for lower house districts. The VEC will then begin a two-candidate-preferred (2CP) count for districts where that method can be used. After the lower house regions have been counted, the VEC will start counting votes for the upper house regions.

How are votes counted for the lower house?

For each Legislative Assembly district, a primary vote count will first be conducted. The primary vote count refers to when the VEC tallies the first preferences of voters in each district. For a candidate to win a district, they must win by an absolute majority. This means that the candidate has to win more than 50 per cent of all formal votes.

If no candidate earns an absolute majority based on first preferences, the VEC will begin a 2CP vote count. This means that the candidate with the lowest number of votes is excluded and their votes are passed to other candidates based on voters’ preferences.

This process continues until one candidate has an absolute majority and wins the election to become a member of parliament in the lower house. Around half of the seats in the lower house are determined by preferences, according to the VEC.

How are votes counted for the upper house?

Proportional vote counting occurs for each Legislative Council region because there is more than one person to be elected. 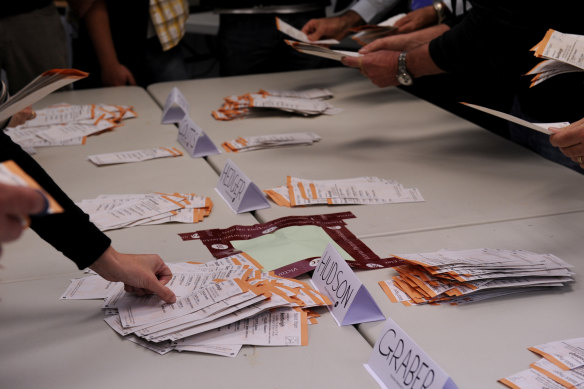 A candidate must receive a proportion of votes known as a “quota” to be elected to the upper house. Any candidate who receives more than the quota will have their remaining votes passed on to other candidates according to voters’ preferences.

If no candidate achieves the quota, or there are remaining vacancies after all votes over the quota have been passed on, the candidate with the lowest number of votes is excluded. The votes that the excluded candidate had are then passed on to other candidates according to voters’ preferences. The process is repeated until all five seats of each region are filled to form the 40 seats of the Legislative Council. 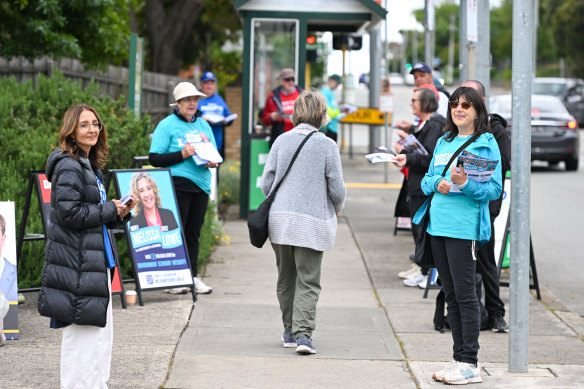 Volunteers handing out how-to-vote cards at the early voting centre in Camberwell.Credit:Justin McManus

How will the VEC handle the record number of early votes?

There has been a record amount of early votes, but the VEC is only allowed to begin counting votes at 6pm on election day. However, a recent change to the rules means vote counters can start sorting early votes from 8am on Saturday.

The VEC told The Age: “A legislative change made earlier this year allows us to extract and sort early votes from 8am on election day.

“This means that as many in-district early votes as possible will be ready to count from 6pm.”

This differs from the 2018 Victorian election, when early votes were only allowed to be extracted and sorted from 4pm on election day.

Will Victoria know who will form the government on election night?

The VEC will attempt to count all ordinary primary and 2CP votes on election night. The VEC said this included “most in-district early votes, and postal votes received and verified to date”. An ordinary vote is any vote cast on election day within an enrolled voter’s district.

The commission believes their system of vote counting “gives election analysts the best opportunity to predict who will form government on election night”.

What happens after election night?