Don’t get caught standing on the edge! Huge cliff collapse is caught on camera and it takes more than a MINUTE for the dust to settle

This is the dramatic moment a large section of a cliff is seen collapsing, taking more than a minute for the dust to settle.

The stunning footage was captured in Cromer near Norfolk, with chunks from the top of the cliff seen peeling off and pushing the rest of it down onto the beach.

Bits of the cliff can be seen pushing down and over the small bits of green shrubbery which line the edges.

Experts said the cliff had fallen due to the intense rain the country has experienced over the last few days. The cliff can be seen falling (left) before hitting the beach (right)

The cliff started to fall at around 6am at Sidestrand and experts have said they had ‘never seen anything like it’.

Brad Damms who has been working on a six-month monitoring project, using scans to track the every-changing coastline filmed the huge cliff fall earlier today.

He said he was stunned by the force of the collapse.

Speaking to North Norfolk News he said: ‘It’s by far the biggest I have seen. It was awesome but sad to watch.

‘I have seen a much smaller one there and smaller ones at Happisburgh but nothing on this scale.’

This is while Matt Shaw from ScanLAB Projects, said: ‘We notice changes every day but this is the first time we’ve seen something this dramatic with our own eyes’, he told the BBC. 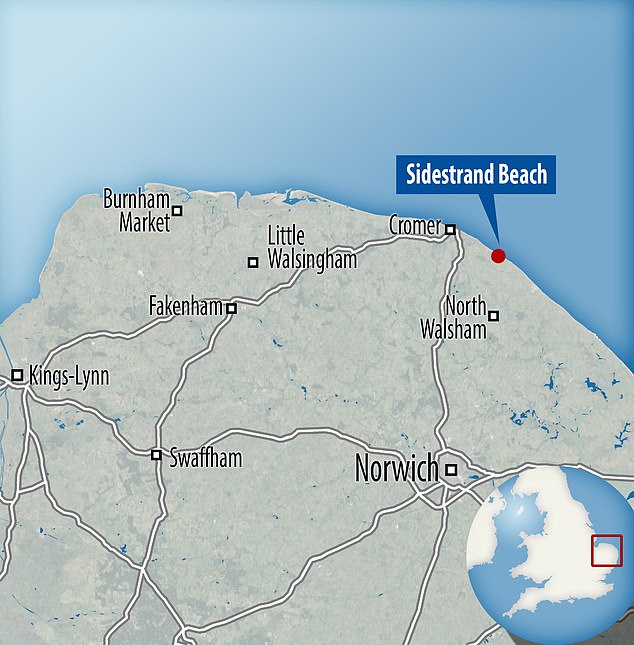 This is while HM Coastguard said rescue teams were being put in place to make sure that people were kept at a safe distance following rocks and sand having crashed down onto the beach.

A spokeswoman said: ‘We’re also imparting safety advice on social media so that the public are aware of the dangers of cliff falls, especially given the intense rainfall we’ve had over the last few days may make other cliff edges vulnerable.’

The cliff fall has now made it impossible to walk long the beach between Trimingham and Sidestrand at high tide, due to the fact that the fallen bits of cliff fell right to the edge of the waterway.

What causes cliffs to collapse?

Cliffs collapse for a range of reasons.

While the most common reason is weathering, there are other factors to consider, such as water crashing against the cliff face, what the cliff is made of, and the climate of the area.

For example, softer materials, such as clay are more likely to collapse than harder materials like granite.

Bad weather naturally erodes the foundations of a cliff, and can cause it to collapse.

One of the most common examples of weathering is when rain fall affects the composition of the cliff. As rain falls, it seeps into the permeable gravel and soil at the top of the cliff, adding weight to it.

At the same time, colder winter temperatures can cause the face of this cliff to freeze, as frozen areas weaken as they thaw. If a cliff is against a body of water, such as a sea or ocean, waves crashing on the cliff can also weaken it over time.

Cliffs can also collapse as the result of rock slides, when whole slabs of rock detach from an inclined face and collapse, or as a result of mud slides, when wet soil and weak rocks fall.