Hunt blasts Boris Johnson over ‘do or die’ vow to leave the EU by October 31, branding it a ‘fake deadline’ that could stop Brexit from happening at all

Jeremy Hunt accused Boris Johnson of setting up October 31 as a ‘fake deadline’  for Brexit tonight, saying it could spark a general election.

The Foreign Secretary warned that trying to leave by Halloween at all costs could stop Brexit from happening after Mr Johnson said that it was a ‘do or die’ date to leave the EU.

In an interview with the BBC Mr Hunt also accused the EU of ignoring viable alternatives to the Northern Irish border backstop in order to keep the UK inside the Customs Union.

Mr Hunt told the broadcaster: ‘Well I think that 31st of October come hell or high water is a fake deadline, because it’s more likely to trip us into a general election before we’ve delivered Brexit, and that would hand the keys to Jeremy Corbyn and then we’d have no Brexit at all.’ 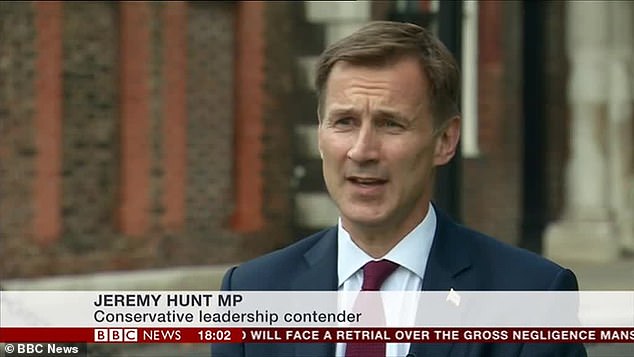 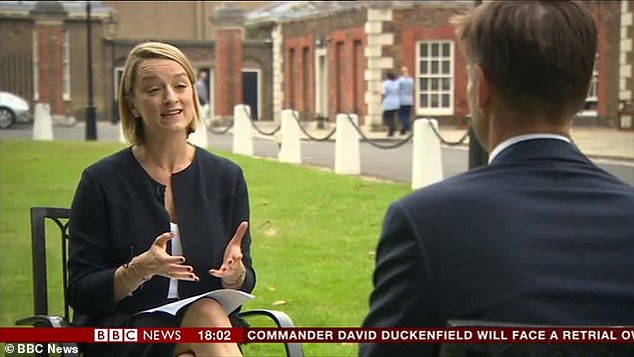 He insisted he would leave the EU without a deal but added that ‘I’m not going to do that if there’s a prospect of a better deal and if I did it it would be with a heavy heart’.

DUP and hardline ERG have place in my Brexit team, says Hunt

Saying that Brexit needed to be handled differently he told the BBC: ‘It’s the biggest constitutional crisis that I can remember, and the key is to put together a negotiating team for Brexit that will demonstrate to the EU that we can deliver Parliament.

‘So what I do differently to what we’ve had before is I would have the DUP in my negotiating team, I’d have the ERG who are the Brexit purists, I’d have the Scottish and Welsh Conservatives, because fundamentally I believe there is a deal to be done.’

In another swipe at Mr Johnson he said the personality of the next prime minister would be crucial to the outcome of negotiations with Brussels to gain a new deal.

‘Both Boris and I want to change that deal, and the judgment is, who is the person we trust as PM to go to Brussels and bring back that deal?’ he told BBC News.

‘It’s about the personality of our PM. If you choose someone where there’s no trust, there’s going to be no negotiation, no deal. And quite possibly a general election, which could mean we have no Brexit either.’

Mr Hunt talked up technological solutions to the backstop, saying they were ‘ready’ now.

Pressed on it he attacked the EU saying it had ‘not wanted to accept this kind of solution because the hope is that we might stay in this thing called the Customs Union where we have to stick to those tariffs’.

He added: ‘I think they know now that won’t get through Parliament. So what I’m saying is let’s not be negative, let’s not be pessimistic.

‘There is a way we can do this but what we have to do is send the right prime minister to Brussels to have those negotiations, have those open discussions and then I think there is a deal to be done.

‘But you’re saying then that the EU didn’t want to accept this idea because they wanted to keep us in the institution, one of the institutions, the European Union. That’s your contention.

‘Well I think they’ve always wanted us to remain as close as possible to the EU, but it’s very clear that what people voted for in the general election that we had two years ago it was for us to leave the Customs Union, leave the single market…’ 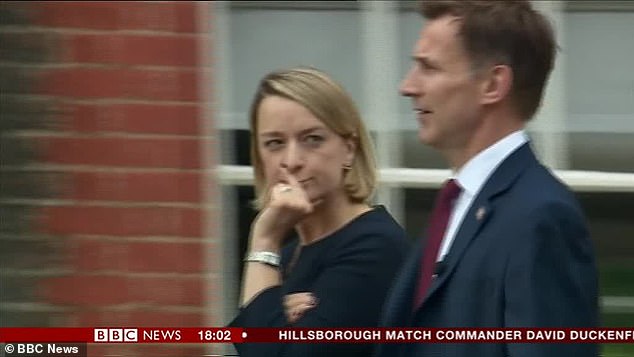 Mr Hunt talked up technological solutions to the backstop, saying they were ‘ready’ now

Mr Hunt, a hitherto loyal follower of Theresa may and supporter of her Brexit plan, cut himself loose from the outgoing prime minister.

He sad that he had ‘never’ truly believed in what she was doing.

He said: ‘What Theresa May tried to do was a deal involving the backstop.

‘I was in Cabinet at the time and I supported her loyally but I never thought that was the right approach.

‘What I’m talking about is a deal that doesn’t involve the backstop as it’s constituted at the moment, so it would be different.

And when I talk to European leaders, what they say is ”look, it’s up to the UK to come up with a solution”.

‘But of course if you come up with a different solution, something that can work, when we’ll look at the whole package.’