In 2005, a few short years after the fall of the Taliban regime, I was in central Bamiyan on a family visit. It was remarkable to see the thousands of young boys and girls in dusty uniforms heading to schools, many of which were still operating under tents.

A short distance outside central Bamiyan, a new tent city had been established to accommodate the thousands of refugees returning home from Iran and Pakistan. There was an almost tangible sense of hope and confidence in the air. 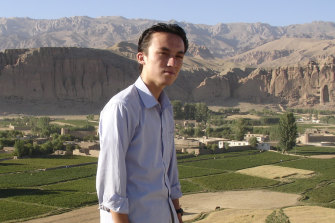 A young Hadi Zaher in front of the Buddha statues idestroyed by the Taliban in Bamiyan.

That Afghanistan may as well have been another planet. The news coming out of Afghanistan now is devastating for the Afghan community in Australia. Taliban have taken Kabul after overrunning major cities, including Kandahar, Ghazni and Herat.

Tarin Kowt, the capital of Uruzgan province, where Australian troops fought and died for 13 years, is among more than two dozen provincial centres now in Taliban hands.

Given the rapid pace of the takeover, Australia will at best evacuate a very small and fortunate group of Afghans who have helped Australians. Most will be left at the mercy of the Taliban.

The Afghanistan Independent Human Rights Commission reports “details of horrific war crimes on a daily basis”. Tens of thousands of civilians have been forced to flee the fighting across the country, and are now taking shelter in public parks, backyards and open spaces in Kabul. Now that Kabul has fallen to the Taliban, there is nowhere else to go for these displaced Afghans.

As the Afghan proverb goes: Aasman dur asth wa zamin sakht – the sky is too far to reach and the land is too hard to dig through. Foreign embassies are overwhelmed with visa applications as Afghanistan’s neighbouring countries prepare for a likely refugee crisis.

Professor William Maley of the Australian National University is right. This catastrophic collapse is a direct result of the US-Taliban deal. It comes mere months after President Joe Biden announced the US withdrawal from Afghanistan. Other allied countries, understandably, have followed suit.

The Taliban, emboldened by the deal, have used the opportunity to systemically outmanoeuvre and outplay both the Afghan government and the US. The US-Taliban deal has been anything but a peace deal. It is a withdrawal deal that has abandoned Afghan civilians to the Taliban, who could not have asked for a more favourable arrangement. 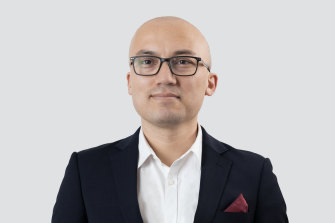 As a board member of the Akademos Society, an Australia-based education charity, I have had the privilege to work with and support young Afghans in Kabul, Bamiyan and Daikundi to get an education and dream of a better future. It was through international support, including donations from Australia, that our students completed their schooling, learned English, learned the use of computer programs and saw themselves as worthy of a peaceful future. They were supported by their families, who wanted a different future for their children, especially for their daughters. Each one of them and their families are more courageous than I will ever be.

All those aspirations are now in tatters. We are no longer getting inquiries about schools and scholarships. The students, their families and our partner organisations which helped us set up these programs and computer lab are now fearful for their lives. They are too fearful to stay yet they are unable to leave. The rise of the Taliban is the fall of everything they ever dreamed of.

The world abandoned Afghanistan in the aftermath of the Soviet withdrawal in the late 1980s. The result was a painstaking lesson in history. In May 2010, the US Secretary of State Hillary Clinton told Afghan women, “we will not abandon you”.

Women in areas under Taliban control have already lost their freedom to work, to get an education, to be a part of the society, and to even appear in public without a male guardian. The world is yet again abandoning Afghan women and other civilians to Taliban terrorists who, in addition to implementing an archaic ideology, remain in bed with al-Qaeda and other radicalised Islamists from Central Asia who are fighting in the ranks of the Taliban. 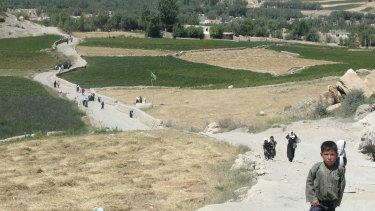 All evidence points to the fact we will regret abandoning Afghanistan to the Taliban. Until that realisation, Afghan civilians, especially Afghan women and girls, will pay the price for our political myopia.

Hadi Zaher is a law student at Monash University and a member of the Hazara community in Melbourne.