Home » World News » ‘I was born here, I will die here’: Tears and desperation at the crossroads of war

‘I was born here, I will die here’: Tears and desperation at the crossroads of war

By Anthony Galloway and Kate Geraghty 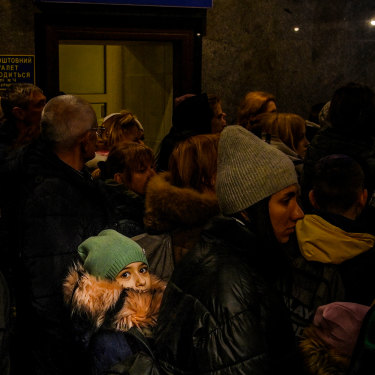 Crowds inside Lviv railway station queue to catch the train to Poland.Credit:Kate Geraghty

Outside Lviv’s railway station, an art nouveau relic from the golden age of train travel, thousands of people huddle together around makeshift tents.

Charities hand out food and supplies as the smell of burning firewood in petrol drums fills the air in temperatures that barely rise above zero.

In the crowded terminal, people push past each other to destinations unknown. The smell of damp clothes fills the air and weary parents rock crying babies who will not be comforted. 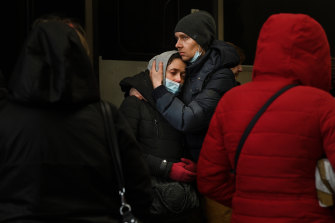 A young couple embrace on the platform at Lviv railway station.Credit:Kate Geraghty

Unable to hold back tears, a young couple on the platform embrace one last time before saying goodbye.

The woman is leaving, but the man is staying.

Countless women and children have said goodbye to loved ones in recent days.

A young woman named Alina is fleeing with her family from the village of Gostomel that borders the Hostomel Airport, about 500 kilometres from the station and just north of Kyiv, which Russian troops have bombarded since the first day of the invasion. 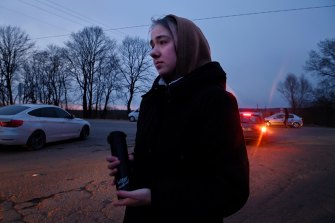 Alina from Gostomel says there are checkpoints everywhere as she makes her way to the Ukrainian-Polish border. Credit:Kate Geraghty

The only one who stayed was her grandmother, telling the family: “I was born here, I will die here.”

“I saw the shelling through the window,” Alina says. “I saw the Russian helicopters flying above, and we moved to the centre of the house and it started shaking,” she says.

Alina says she has been travelling by car for days on roads that felt “endless”. There are checkpoints everywhere and pitched battles in the skies.

The family are moving to Poland, but they don’t know for how long.

It’s a scene that repeats all day, every day in the western Ukraine city of Lviv, just 64 kilometres from the Polish border. This isn’t the first time the city has housed thousands of refugees fleeing war. For centuries, it has been a crossing point of competing empires, faiths and trading routes.

King Casimir III of Poland conquered the city in 1340. The 17th century brought invading armies of Swedes, Hungarians and Turks to its gates. The Russians came in 1914. The Nazis in 1941. Despite a history of bloodshed and upheaval, it has remained one of Ukraine’s most culturally significant centres.

Now the city of about 700,000 people is the crossing point for another generation seeking a place of greater safety.

About 100,000 people are fleeing Ukraine each day, most of them through Lviv.

Many men feel compelled to remain behind after Ukrainian President Volodymyr Zelensky ordered those aged between 18 and 60 to stay and defend the country.

At the border crossing to Poland west of Lviv, a 60-year-old woman named Oxana is serving refugees tea and sandwiches from the front yard of a house she has lived in her whole life.

She says people are waiting for days in cars and are very unprepared. Many need food and water. 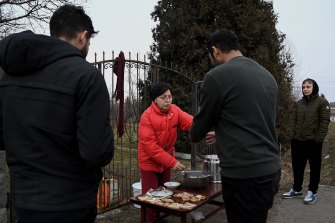 Oxana serves hot tea and sandwiches in front of her home to people heading to the Medyka crossing at the Ukrainian-Polish border.Credit:Kate Geraghty

“Most people just packed their bags and left, they were not prepared because we did not believe that something like this could actually happen,” she says.

“When we can see women and children from Kakhovka, Kyiv, Kharkiv fleeing the country – my heart breaks.”

In recent days, Oxana says there have also been many Ukrainians from the city of Chernihiv, 750 kilometres to the north-east, who fear that Belarusian President Alexander Lukashenko will send his troops to join Russia’s invasion.

Oxana has a blunt message: “Russia should burn in hell with Putin and Lukashenko, that’s all I really have to say.”

In the same line of slow-moving cars, a kindergarten teacher named Katya is fleeing with her four children to Poland.

Katya’s husband died in an accident two years ago. She believes Russia will attack Ternopil, a bustling city of 200,000 only 130 kilometres south-east of Lviv, and that she had no option but to pack up and leave. 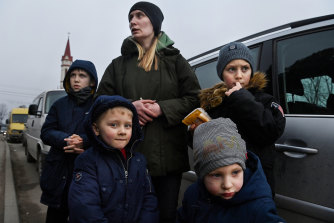 Kindergarten teacher Katya says she needs to escape the country for the sake of her sons Daniel, Svyatoslav, Ustinov and Denys.Credit:Kate Geraghty

“I decided to flee when I saw that Russian saboteurs were acting undercover, making marks on our buildings to target us,” she says.

“I am afraid and anxious. I have to leave because I don’t want my children to see the war. I think it is going to take a long time before we can return home. I don’t want to escape Ukraine, but I have to for my children.”

James Elder, an Australian worker for UNICEF, has been working in and around Lviv’s railway station.

“It’s just this relentlessness of horrible forced farewells. Fathers explaining to 10-year-old sons why Dad is leaving, and husbands and wives having a final embrace – that has been relentless,” he says.

“Every conversation I have with people – that stoicism kind of breaks for a second, and there’s tears.”

Many people in the railway station have escaped Ukraine’s second-largest city Kharkiv, which has been hit all week by shelling and rockets. 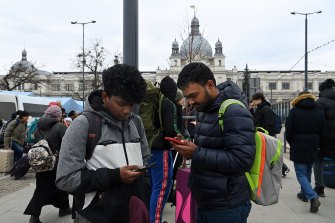 Indian doctors Agnivesh Sl (left) and Javeen Kolar arrive at Lviv railway station after their friend was killed by shelling in Kharkiv.Credit:Kate Geraghty

Indian doctor Javeen Kolar, who has been living in Kharkiv for two years, says he decided to immediately take the 20-hour train journey to Lviv after his friend Naveen Kumar was killed by a shelling attack.

“We lost many things,” he says. “My friend died in the shelling … after this happened, we just left.”

Indian medical student Kajal Rauniyar, also a friend of Kolar, says she spent six days in an underground shelter before deciding to flee by train. 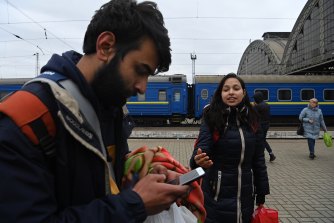 “We were in a very dangerous situation, there are lots of Indians there. We didn’t know how to reach the railway station, it was a really difficult situation,” she says.

“They need to evacuate my friends from there because it’s very dangerous. Every minute there is shelling and firing.”

Along the highway closer to the border, cars are backed up for kilometres.

Maria sits in her van 10 kilometres from the Polish border with her two children, after driving from the town of Zadariv about 150 kilometres to the south-east. She says they have been on the road for four days. 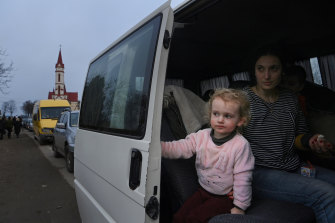 Maria and her family near the border crossing with Poland. They have been on the road for four days. Credit:Kate Geraghty

“Our children are suffering, and so we have to leave our homes and go far away. It’s hard to look at those children, you have to turn away,” she says.

“I hope that our fighters, our warriors, will win. We are sure in that because our army is strong and courageous.”

Over a million Ukrainians have fled the country in the first week of the war, according the United Nations.

However, other Ukrainians have responded to the call to defend their nation in its time of need and are crossing into the country.

When we enter Ukraine from Poland, a group of Ukrainians tell us they are frustrated that they are being held up for so long by border officials.

“We want to get in, not out – and yet the process is so slow,” one woman tells us as she waits to be accepted back into her country.

While there are no shortage of Ukrainians taking up arms, resources are stretched. Humanitarian agencies have gone from dealing with an eight-year war in the country’s east to what could spiral into the worst refugee crisis Europe has seen in decades.

Children who have fled to Lviv need emergency education, temporary classrooms and healthcare. Elsewhere, people who have been hiding in shelters for days need basic supplies and a meal. Pregnant women forced to give birth in these conditions need obstetric kits.

With the country’s airspace shut down, Elder says it is critical that supply routes are kept open to supply humanitarian aid.

He also says it is critical that countries continue their tolerant approach to accepting Ukrainian refugees as the numbers continue to grow.

“These numbers will continue to escalate and then we will rely on politicians, the press and everyday people to maintain that tolerance for the people fleeing,” Elder says.

“I haven’t spoken to a single person here who wants to leave, it’s out of their hands, they’re fleeing a conflict, they’ve seen people killed, they’ve spent nights in bunkers and they have no choice.” 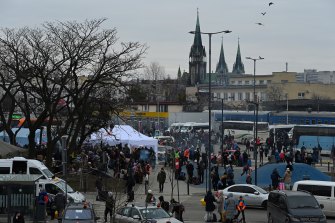 People outside Lviv railway station where trains and buses leave for Poland.Credit:Kate Geraghty

For now, Lviv is still a place of refuge in a country beset by war. People here are operating on the theory that the Russians will not attack Ukraine’s sixth-largest city as it will only take one stray bullet or rocket to fall across the border into Poland, and Moscow has attacked a NATO country.

However, the air raid sirens ring out daily and everyone is ordered to seek shelter, a reminder that war is only a train ride away.