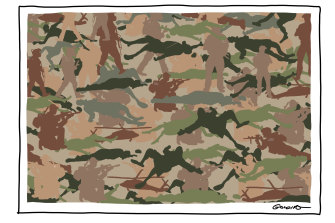 To submit a letter to The Age, email [email protected] Please include your home address and telephone number.

Ahmed Hassan and Ali Ahmed of Youth Activating Youth are due society’s appreciation and support for their exemplary work in helping marginalised and at-risk young people turn their lives around. The YAY website records that 8000 youth have been supported by staff and volunteers and 4900 have completed its programs, with 90 per cent reporting increased engagement.

Yet, these two public-spirited young men have been subject to shocking online abuse when trying to recover from COVID-19 (‘‘Trolling ‘worse than COVID battle’’’, The Sunday Age, 15/11). The perpetrators even included doctors and lawyers.

It is high time Australian authorities cracked right down on cyber-bullying. What is euphemistically called a ‘‘pile on’’ is in fact mobbing, or pack bullying. It is strictly prohibited in the physical world in some countries due to its close association with serious mental health damage and suicide.

This prohibition must also happen in the online world. At minimum, users of social media and online forums should have to use their full names and act responsibly, with legally-enforced penalties for cyber-bullying. It is known to endanger life and it should be treated as such.
Barbara Chapman, Hawthorn

Do it properly
I applaud the state government for their unprecedented investment in social housing announced last week (‘‘$5.3b blitz on new public housing to ‘change lives’’’, The Sunday Age, 15/11). There has never been a greater need in our community for this initiative.

It is true that infrastructure projects are some of the most effective economic stimulus measures, and applying this principle to housing our most vulnerable citizens is profoundly sensible public policy.

I call on the Minister of Housing to ensure that proper planning is conducted to prevent the problems of ‘‘ghettoised’’ communities that have developed in other areas of the state. A mix of housing types, along with ample parkland for recreation and children’s playgrounds, are essential for the good functioning of these new communities in the long term.

Let’s ensure this opportunity is a step up for those in need, not merely the bare minimum for the most people possible.
Michael Puck, Maffra

Hardly the leader
The letter ‘‘Retire the phrase’’ (The Sunday Age, 15/11) raised some interesting points about the United States ‘‘democracy’’ being referred to as the ‘‘leader of the free world’’.
Looking at The Economist’s Democracy Index, you will see that the US rates at 25 in the world and is called a flawed democracy; hardly a good score or description of a leader in democracy.

The US is a leader only because it has the money to influence, not because of the level of democratic practice.
Stuart Symonds, Bendigo

Does what it wants to
A Regional Comprehensive Economic Partnership has been signed between a number of our neighbours, including China, and is trumpeted as a big step up with our trade with China (‘‘Free-trade pact paves new path with China’’, The Sunday Age, 15/11).

Australia signed a free trade agreement with a China in 2015, which supposedly gave our businesses an economic advantage and yet Australian trade today faces multiple trade embargoes within various industries.

It would appear that China will do what China wants to do regardless of signatures on a piece of paper and our optimism on China, at least, is misplaced.
Alan Inchley, Frankston

Extend the contrition …
In light of the alleged war crimes against the Afghan people I am sure all compassionate Australians would support the act of contrition called for by Jean Ker Walsh (Letters, 20/11).

She suggested the government should, as an act of contrition and indeed statesmanship, grant permanent protection to Afghan people here in detention or living in the community with insecure and uncertain futures.

But the Australian government needs to be pressured to go further with acts of contrition and end the cruel and inhumane treatment of all the asylum seekers locked up for more than seven years whose only crime was to seek a safe life here.

Victorians know what lockdown was like for a few months so they can begin to imagine the mental health issues for these people locked up with no end in sight.
Marie Goonan, Northcote

… to all refugees
There is euphoria in the air as we move out of lockdown. We have had a taste of our freedoms being limited, of isolation, and of its mental health effects. It is low-level stuff compared with what is happening to asylum seekers we have imprisoned in detention centres.

As Paul Keating said so powerfully in the Redfern speech – our failure was to not imagine these things being done to us. Now we have a glimpse of what detention might feel like. Let’s us end the misery for those we detain.

On any measure these refugees have suffered enormously at our collective will and detaining them costs our community mightily in dollar terms.

Let what we have just been through be an opportunity to quietly bring these people into the community, give them help with housing and training to get jobs here and end this stain on our national psyche.
Anne O’Donovan, Southbank

Shocked, not surprised
We can be shocked and distressed, but we shouldn’t be surprised by the current allegations of war crimes by members of the SAS in Afghanistan, thanks to an Army lawyer.

Major David McBride blew the whistle on this heinous behaviour when he went to the media only after hitting a brick wall in the ADF. We would not know about all of this without McBride’s courage, determination and perseverance. Incredulously, he still faces a life sentence in jail for his actions, but McBride deserves to be hailed not jailed.

Too many lives have been destroyed by the alleged actions of these rogue soldiers. McBride’s should not be one of them.
Nick Toovey, Beaumaris

Note from the Editor

The Age’s editor, Gay Alcorn, writes an exclusive newsletter for subscribers on the week’s most important stories and issues. Sign up here to receive it every Friday.