EXCLUSIVE: Metallic-looking orb is seen flying over Iraqi city of Mosul in 2016 – first ever publicly revealed UFO footage taken by US spy plane in a conflict zone – as expert warns of ‘significant risk’ to troops overseas

DailyMail.com obtained an exclusive image of a metallic-looking orb flying over an Iraqi city, caught on video by a US spy plane.

The image, captured in April 2016 by an intelligence-reconnaissance plane, was included in a classified briefing video on UFOs shown to multiple US government agencies.

The briefing video describes it as a ‘short clip of an unidentified flying orb that appears to have a metallic shine on its surface’, and shows the strange object flying over the city of Mosul in northern Iraq with the background of the shot showing the streets below.

It is the first publicly revealed image from the US government’s ongoing UFO investigation showing an unidentified craft over a conflict zone.

A UFO flying around where the US military is operating has sparked security and safety concerns at the Department of Defense, with military officials worried it could endanger pilots and ground troops. 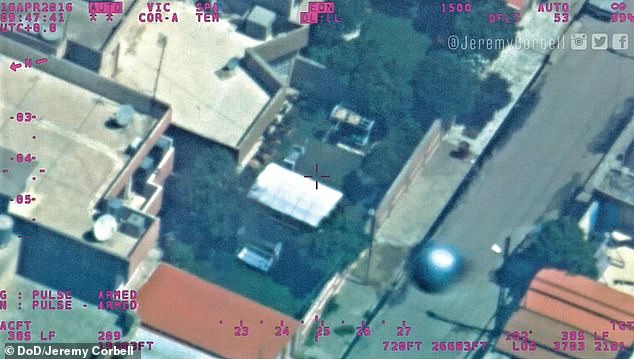 An image obtained exclusively by DailyMail.com of what appears to be a metallic-looking orb flying over Mosul, Iraq in April 2016, was included in a classified briefing video on UFOs shown to multiple US government agencies (image credit: DoD/Jeremy Corbell) 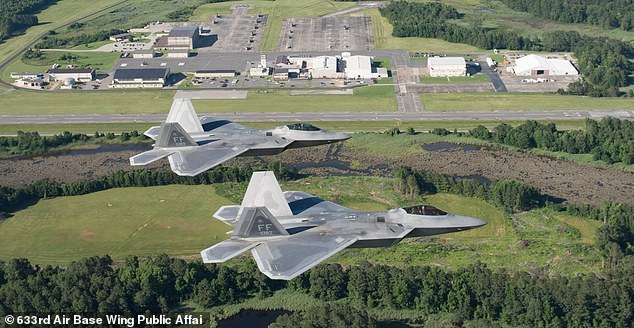 One intelligence source said the video was sent to the Joint Base Langley-Eustis in Virginia, where imagery and electronic signals intelligence experts studied it for United States Central Command (CENTCOM)

Although the image itself is not classified, footage from which the image was captured was part of a classified briefing produced by the Pentagon’s Unidentified Aerial Phenomena Task Force (UAPTF), a unit tasked with investigating UFO incidents, which has now been replaced by another office in the Department of Defense.

It was obtained by journalists Jeremy Corbell and George Knapp, who have released the image on their new UFO podcast, ‘Weaponized’.

The briefing describes and shows the UFO as moving from south to north, adding that it does not appear to descend.

In a four-second video titled ‘Mosul Orb’ included in the briefing, the UFO appears for one second as it flies alongside the MC-12 spy plane. 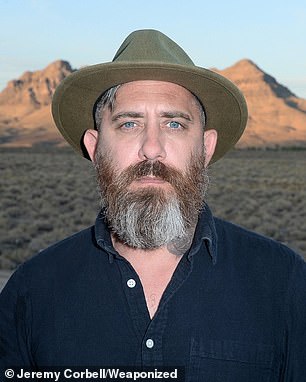 Intriguingly, the object appears to have no apparent flight surfaces like wings, or discernible propulsion.

An intelligence source with operational knowledge of the footage said it was filmed using ‘FMV [full motion video] by DGS-1’ – implying that the plane sensors captured infra-red and other data when it filmed the UFO.

DailyMail.com understands that officials who assembled the briefing video believe the ‘orb’ was under intelligent control.

One intelligence source said the video was sent to the Joint Base Langley-Eustis in Virginia, where imagery and electronic signals intelligence experts studied it for United States Central Command (CENTCOM).

Despite being analyzed and studied by intelligence experts for over six years, the incident remains unexplained.

DailyMail.com can now reveal that the case formed part of the Office of the Director of National Intelligence (ODNI) Preliminary Assessment on UFOs, a report published in May 2021 which analyzed 144 cases and found an explanation for just one. 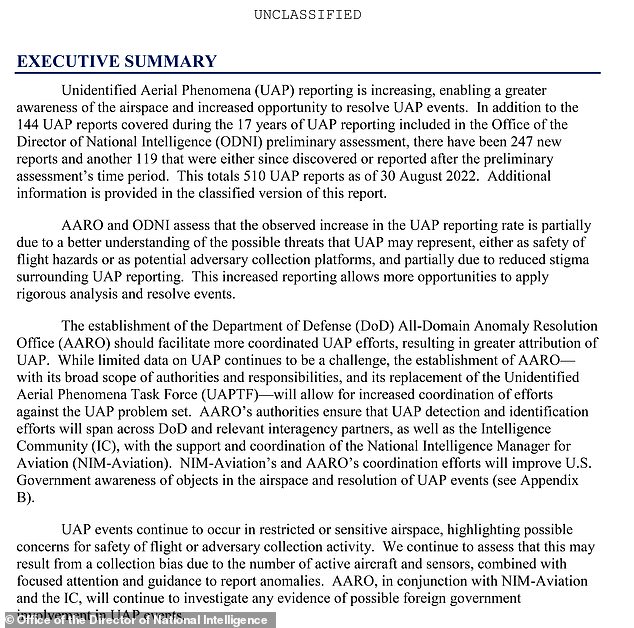 It comes a few months after the Office of the Director of National Intelligence (ODNI) published a second UFO report this month, which said it has analyzed 510 cases up to August 30, 2022 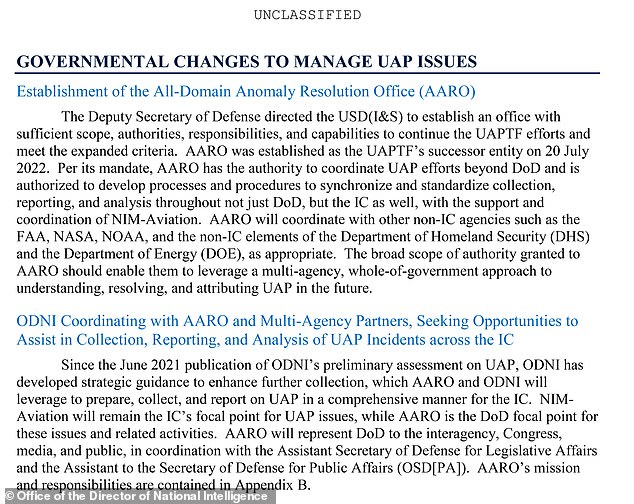 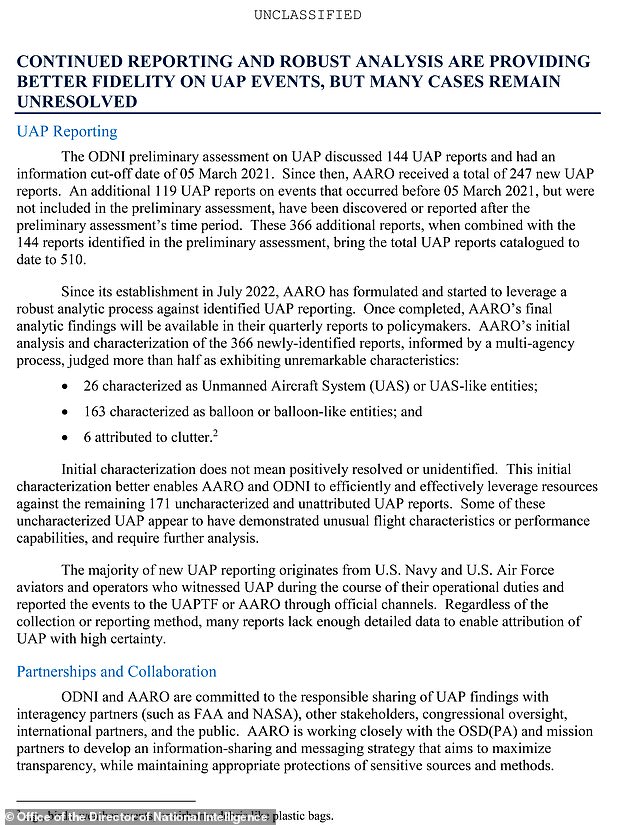 The ODNI published a second report this month, which said it has analyzed 510 cases up to August 30, 2022.

In October last year DailyMail.com revealed information from the classified version of this report sent to Congress.

One source who had seen the report described dozens of videos on classified servers showing metallic-looking orbs captured by US spy planes or drones in the Middle East – similar to the image released today.

‘These drones operate 20-25,000 feet up in the air and they’re flying around. We’re keeping an eye on bad guys all over the world,’ the source said.

‘An operator will be zoomed in looking at a town in Syria. And all of a sudden, a little orb will go flying through the viewfinder.

‘The operator’s like, ”What the hell?” And so he starts focusing on it and he just watches the orb for a while. We might get it for 30 seconds, we might watch it for 10 minutes. And then it will do something remarkable, like suddenly bolt off the screen.’

The image obtained by DailyMail.com was taken at 9:47am Coordinated Universal Time on April 16, 2016, according to its timestamp.

There were also precise coordinates of where the image was taken in northern Iraq, but Corbell told DailyMail.com he removed them out of an abundance of caution to avoid the release of sensitive information.

CENTCOM forces have been deployed in the Middle East since 2014 to conduct military operations against ISIS.

DailyMail.com understands that Congressional intelligence and defense committees have seen the image and footage, as part of a briefing given by the Unidentified Aerial Phenomena Task Force (UAPTF), a previous incarnation of the government’s UFO office. 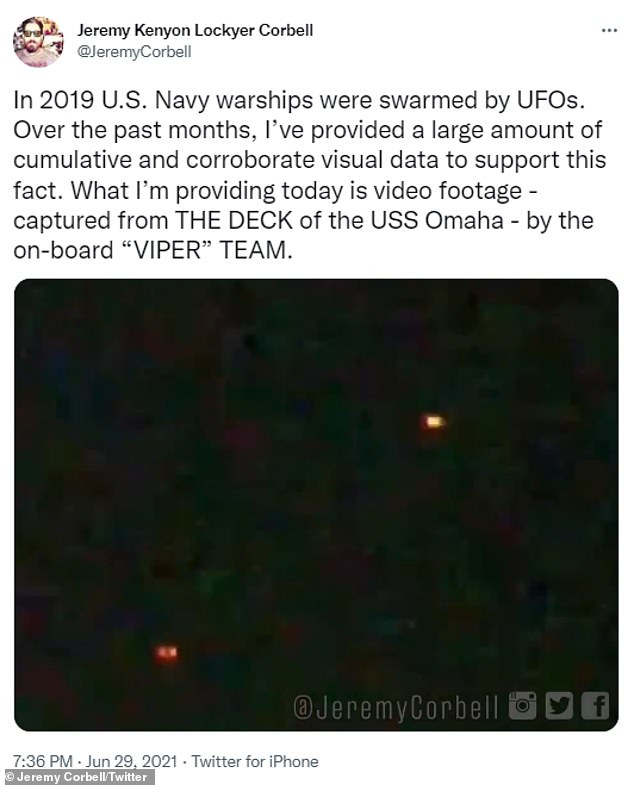 In May 2021, Corbell published videos from the warship incidents that set social media ablaze 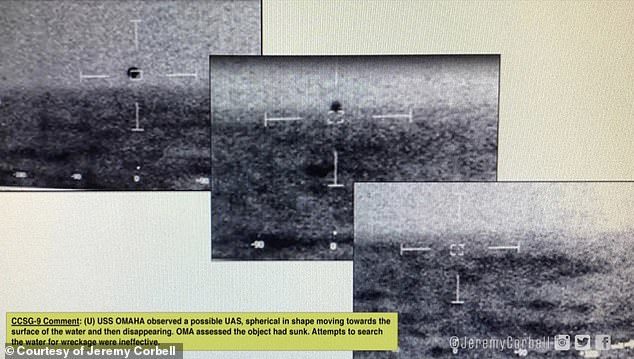 Still images and briefing slides from a video show a spherical object diving into the Pacific Ocean off the coast of California in 2019. Jeremy Corbell told DailyMail.com last June that the video shows ‘FLIR [forward looking infrared] data’ that is complimented by the radar footage 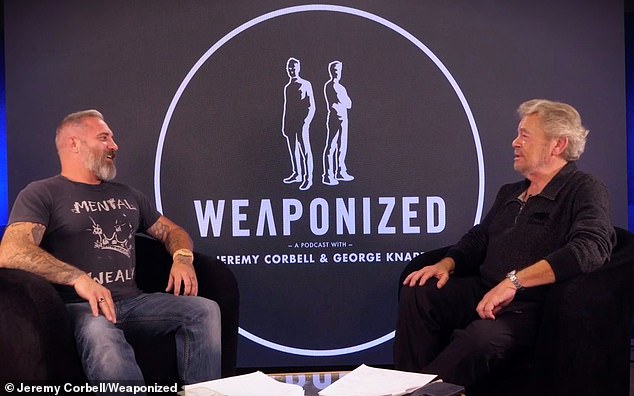 Corbell and Knapp said they will be releasing information, photos and videos in the podcast that they have been holding for ‘years’

Corbell said that the briefing presentation was updated on shared classified intelligence servers on November 4, 2021, to encourage and inform reporting of UFOs by armed forces personnel – and that it has been shared with the wider intelligence community to keep them updated about UFO incursions into sensitive airspace.

He said the spherical shape of the object captured in Iraq is reminiscent of similar UFOs encountered by naval aviators operating on the US east and west coast every day, but is more complicated since it is occurring in an active conflict zone.

‘For the first time, we are releasing a military-filmed image of a UAP over an active conflict zone,’ Corbell said. ‘This is an entirely different scenario to the east and west Coast incursions over training ranges.

‘UAP [unidentified anomalous phenomena] pose significant risk to our service men and women, and this case highlights this – and is unfortunately not unique.

‘This is not just about safety concerns to pilots and ground troops. Its potential consequences are far deeper. And the scope is now proven to be global.’

A source close to the military’s current UFO investigations office, the All-domain Anomaly Resolution Office (AARO), said there are ‘more cases like this one’.

‘​​We have investigated a lot of UAP cases over the years and there are many more cases like this one. And this one was indeed part of the official UAP investigations by the UAPTF and now DoD’s AARO. And it is still unresolved.’

Corbell added: ‘No matter where UFOs are from, it is now openly admitted by our Department of Defense that they are appearing with an increased frequency worldwide.

‘UAP, at minimum, pose a fundamental intelligence and combat identification problem that must be addressed.

‘It’s time to acknowledge the UFO problem, and I am hopeful that ARRO and its stakeholders will dedicate robust resources to this enduring mystery on behalf of the American and global public.’

This case has emerged following the approval by President Joe Biden of the Fiscal 2023 National Defense Authorization Act, which contains provisions relating to UFOs. 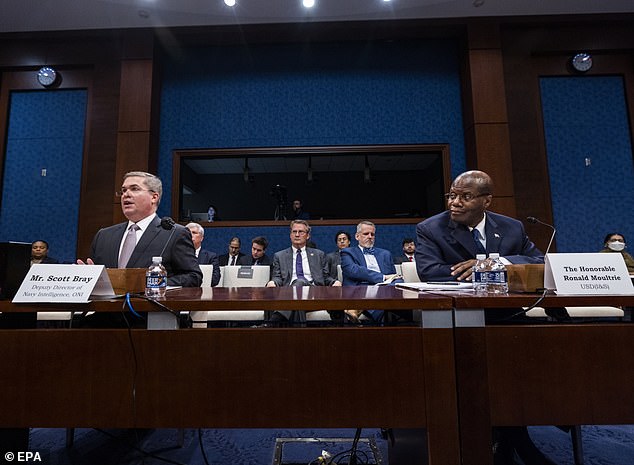 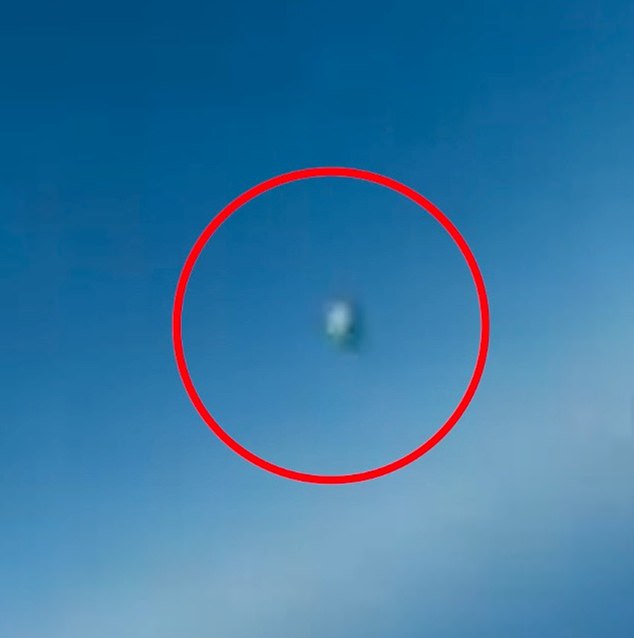 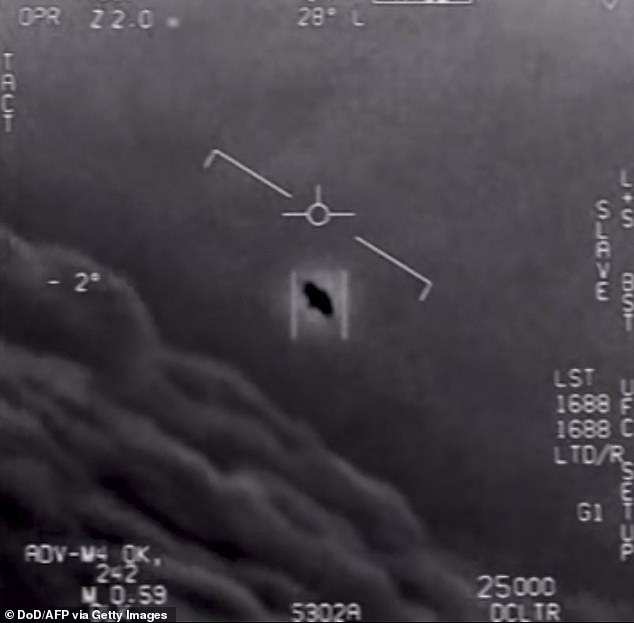 This file video grab image obtained April 28, 2020 courtesy of the US Department of Defense shows part of an unclassified video taken by Navy pilots that have circulated for years showing interactions with ‘unidentified anomalous phenomena’

One clause in the new law offers protections for any whistleblowers coming forward to congress in classified briefings to disclose any previously hidden programs on ‘unidentified anomalous phenomena’ involving ‘material retrieval, material analysis’ and even ‘reverse engineering’ and ‘developmental or operational testing’.

In May last year Congress held its first hearing on UFOs in 50 years.

Corbell was named during the hearing as the source for footage of pyramid-shaped objects hovering over US Navy ships.

He gained notoriety after producing a popular Netflix documentary on Bob Lazar, who claims to have worked at the infamous Area 51 in Nevada on recovered alien spacecraft.

George Knapp, who reports for Las Vegas CBS affiliate KLAS-TV, became a noted figure among UFO enthusiasts after his first interview with Lazar in 1989, and has written books on the government’s UFO programs. He has won two Peabody awards and other gongs for his reporting.

Corbell and Knapp said they will be releasing information, photos and videos in the podcast that they have been holding for ‘years’.

The first episode, released today, includes audio of an interview with a naval officer from the USS Paul Hamilton who witnessed alleged UFOs swarming the ship in July 2019.

‘It was actually coming from the west,’ the officer told Corbell in the recording. ‘Over water away from land, I mean like, the only thing we have over there is Hawaii, which is probably the closest thing west of us.’

Other witnesses say the alleged UFOs ‘shot down beams of light’, and swarmed several other ships that were also conducting exercises in the Pacific Ocean off the US west coast that month.

Last year the Pentagon said they had identified the craft as drones, but could not confirm where they came from or who operated them. Corbell’s witness was skeptical of the drone theory.

‘They would depart on different bearings that they would come in from,’ the officer said.

‘Pretty constantly, it would be a different bearing, which is weird right, like so if you deploy a drone to check something out, it would come. So that was something significant enough for us.’

Knapp and Corbell’s first episode of Weaponized can be found here.