Imagine all the Post-its: Hong Kong protesters come together with 'Lennon Walls'

HONG KONG (Reuters) – During Hong Kong’s “Umbrella Movement” of 2014, colorful Post-it notes of support covered a wall near where protesters camped in the streets calling for democracy in the Chinese-controlled city, becoming a symbol of the movement.

Today, similar sticky note mosaics have popped up on walls across the territory amid rolling protests against the government’s handling of a controversial extradition bill, highlighting how widespread the demonstrations have become.

Part art, part politics, supporters have dubbed them “Lennon Walls” after the original John Lennon Wall in communist-controlled Prague in the 1980s that was covered with graffiti, Beatles lyrics and messages of political grievance.

For over a month, the former British colony of Hong Kong has been rocked by large and sometimes violent protests against a bill that would allow for the extradition of criminal suspects to China for trial in courts controlled by the Communist Party.

The city’s Beijing-backed leader has suspended the bill, declaring it “dead”, but opponents want it formally withdrawn, fearing the further erosion of freedoms promised to Hong Kong when it returned to China in 1997.

The movement in recent days has turned to sticky labels.

Lennon Walls have popped up from the financial district to Lantau island, where the airport is situated.

In Tai Po, a district about halfway between the downtown area and the border with China, an underpass was converted into a “Lennon tunnel”, with pastel yellow, blue, pink and white messages across the walls.

“No rioting, only tyranny” was another message, a reference to the government’s labeling of actions during a demonstration on June 12 as rioting. Police responded that day by firing tear gas, rubber bullets and bean bag rounds. 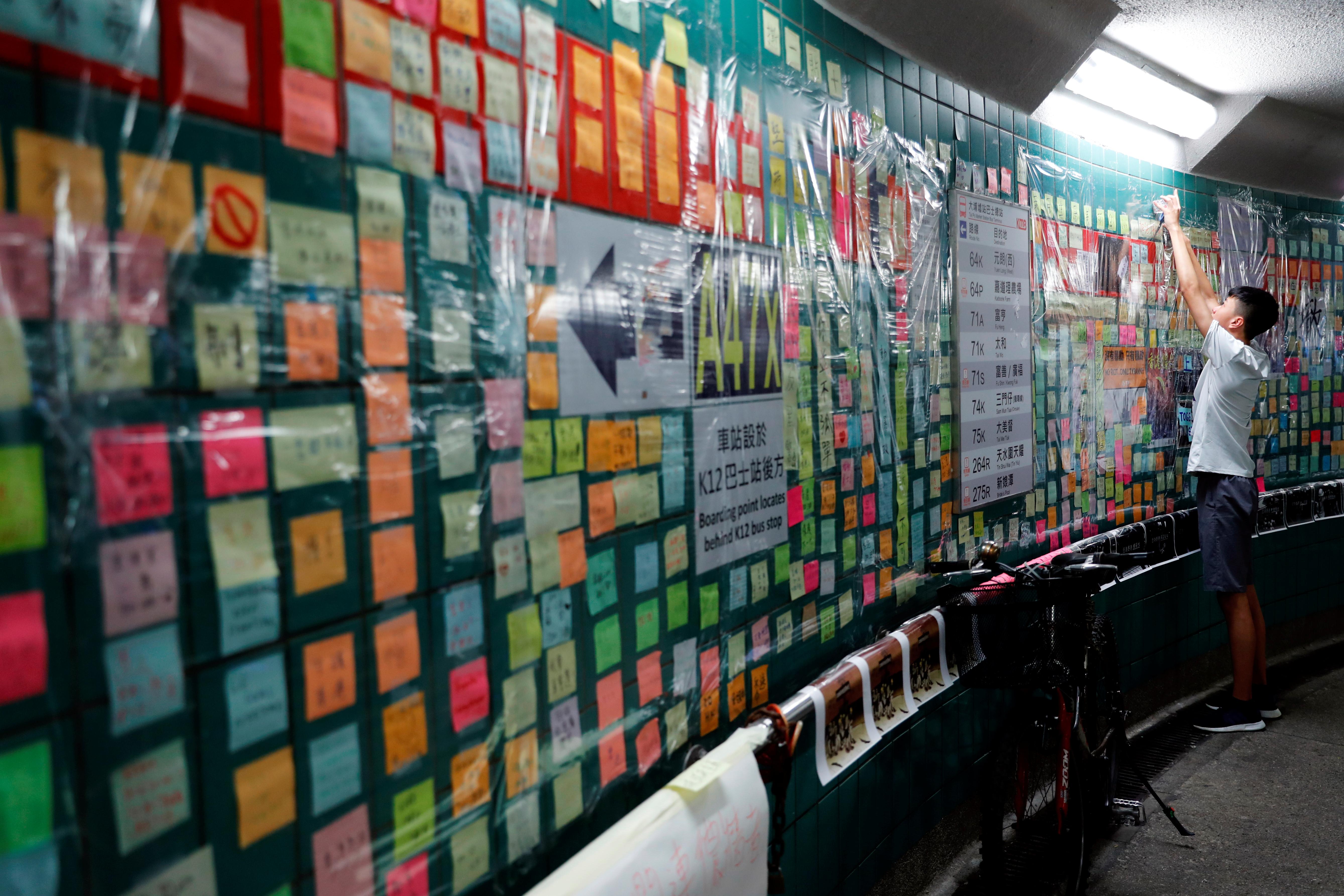 “We want everyone in HKU or nearby to understand what happened in Hong Kong in the past month, and we just hope to remind people that this government … can’t kill our spirit, our values, what we treasure the most,” she said.

Some of the messages went beyond small square notes.

At more than one Lennon Wall, protesters taped pictures of Hong Kong leader Carrie Lam and pro-Beijing lawmakers to the floor to create “democracy dance pads” – and invited people to stomp on the images to music.

One innovative protester hung a flip-flop on a string, taped it to the wall, encouraging people to fling it at a picture of Lam, according to an image on Facebook.

The outpouring of wall-borne emotion has spread as protesters organize demonstrations across the territory, including areas that rarely see political activism.

The sticky notes have not been universally welcomed.

On Wednesday night, police intervened when note posters scuffled with men trying to remove them in Yau Tong, a working class neighborhood on the eastern side of Kowloon, across the harbor from Hong Kong island.

By Thursday morning, all the hundreds of memos there had been removed. A few notes were left on the ground, including one saying “Hong Kongers, never give up”.

Elsewhere, police said on Thursday they had arrested a man who assaulted another at a Lennon Wall in the Kowloon Bay part of town. The origin of the attack was not immediately clear.

In the face of opposition, protesters have refused to let it be.

Some supporters have mounted 24-hour guard rotations over the walls. In some places, Post-its and messages have been covered over with plastic or tape to preserve them.

Hong Kong activists on Thursday lay sunflowers and white lilies at a memorial site for a man who fell to his death during protests against the extradition bill.