The queue for a selfie on Snowdon’s peak: Incredible photos show climbers lining up to reach top of Wales’ highest mountain over bank holiday weekend

These shocking photos show a long line of climbers queuing up to take selfies on the summit of Mount Snowdon.

The peak of England and Wales’ highest mountain, which is 3,560 feet tall, was packed with people over the Bank Holiday weekend, with videos showing the long queues shared widely on social media.

Locals have blamed the overcrowding on the Welsh government, claiming recent ‘heavy promotion’ was behind the surge in tourists.

Some have compared the photos to the recent spate of deaths on Mount Everest, which has claimed 11 lives in 13 days following overcrowding chaos. 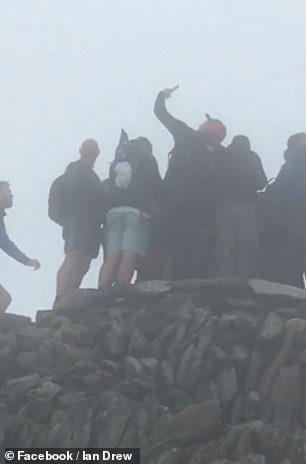 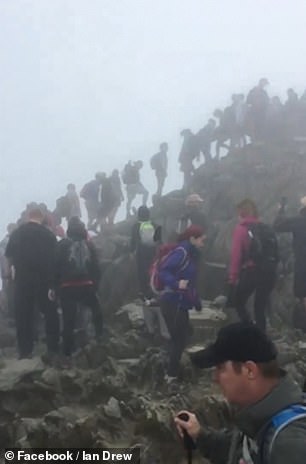 Long queues of people were spotted lining up to reach the summit of Mount Snowdon (right) in Wales, with many of them taking selfies when they reached (left)

As well as the Everest deaths, nine climbers have died on other 26,000 ft Himalayan peaks, while one is missing.

At least four deaths on the world’s highest mountain have been blamed on over-crowding with teams waiting sometimes for hours in the ‘death zone’ where the cold is bitter, the air dangerously thin and the terrain treacherous.

Ian Drew regularly climbs areas of the national park in Wales and filmed a clip of the bank holiday queues on Snowdon.

The footage shows climbers lining up to take pictures at the 3,300ft peak while being buffeted by poor weather.

Some of them, clearly exhausted, are resting as the others line up to get to the top. Mr Drew posted the clip to a Facebook group and wrote: ‘Bank holiday traffic even on Snowdon this weekend, what a shame I have stood on here many times just me and my kids never seen it like this.’

It attracted a deluge of responses, with one user saying: ‘Looks like what is happening on Everest!’

David Archer, chairman of the The Snowdonia Society, said: ‘Snowdon is being quite heavily promoted by the Welsh Government and the tourism board as an adventure location which is great for local businesses and the local economy, but this does create implications. 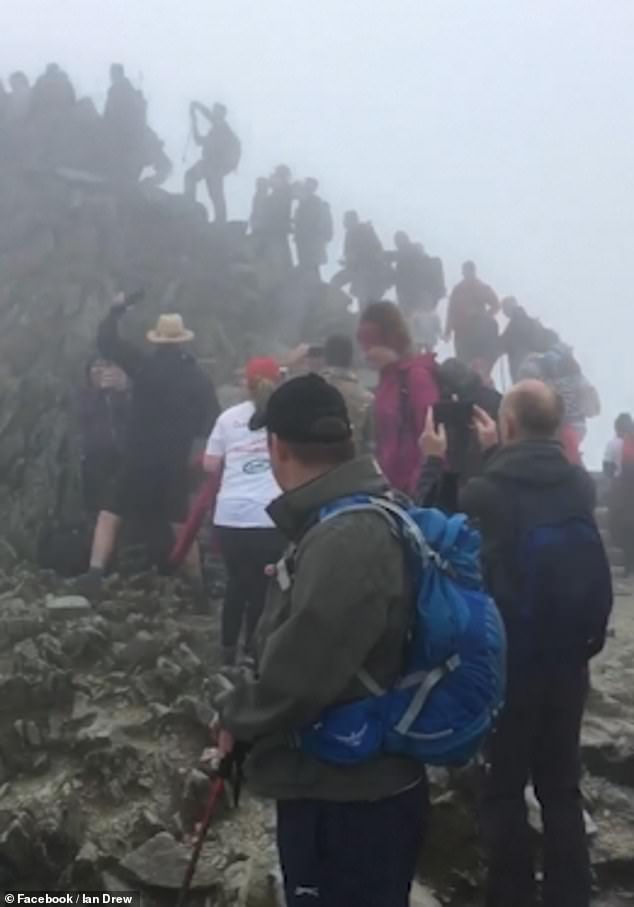 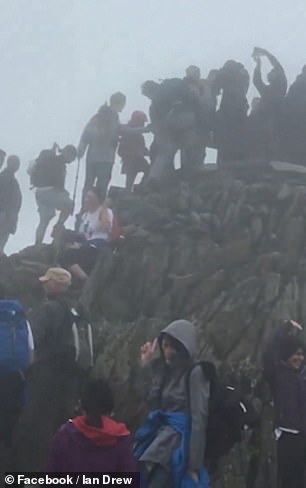 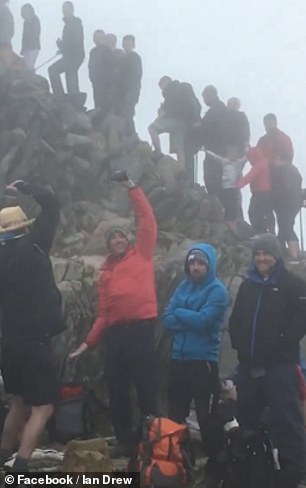 Photos show climbers lining up to take pictures at the 3,300ft peak while being buffeted by poor weather – as others rest in the queue

‘What we do think is important is that the National Park Authority does have adequate resources to manage and maintain the area.

‘Resources are being cut, and the National Park Authority don’t have the same budget or the number of wardens as they did ten years ago.

A spokeswoman for National Park Authority, said: ‘All revenue from our car parks for example are invested back into managing footpaths on the mountain and maintaining facilities.

‘But it’s not enough. Snowdonia National Park Authority has half the resources it had 20 years ago, and visitor numbers have at least doubled.’

A Welsh Government spokesperson said, ‘We are committed to growing tourism in a sustainable way across Wales, encouraging visitors to explore new areas and destinations throughout the year. We are currently consulting on our future tourism strategy, looking at ways we can work with the industry in Wales to explore the challenges and opportunities we face.

‘Earlier this year we announced £2.2 million to improve our tourism infrastructure, including improvements to parking, cycle paths and toilets.’