Indian Summer to give final blast after bitter -6C chill 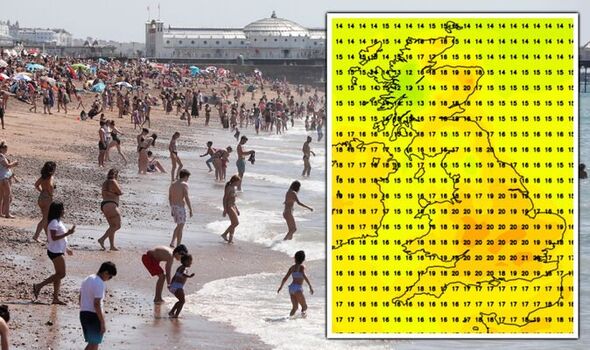 Temperatures will yo-yo through the coming days as a battle plays out between weather systems straddling the UK. High pressure to the west will collide with low pressure to the east forcing bitter Arctic winds across the nation. 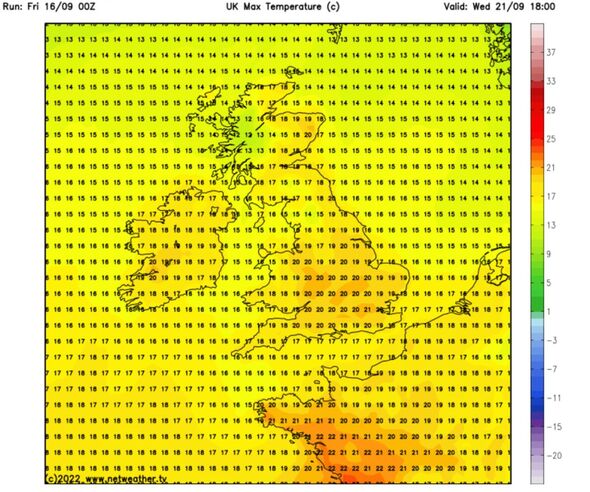 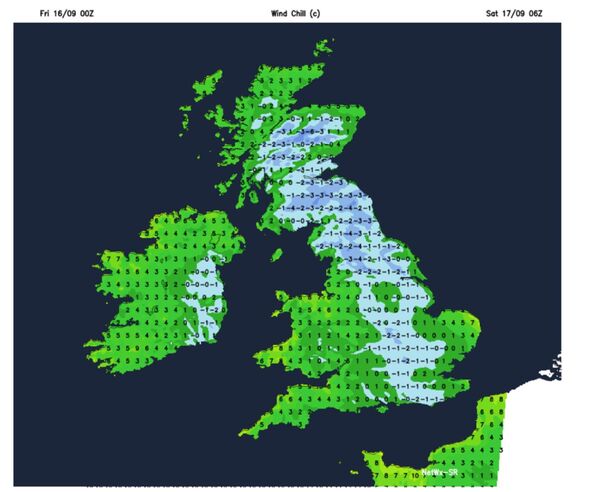 The mercury is forecast to hit single figures today before chilly Polar winds make it feel close to -6C in northern Britain tonight and widely below freezing elsewhere.

Met Office meteorologist Alex Deakin said: “For the next few days, high pressure is going to be a big feature of the weather.

“It is going to push up against another area of low pressure, and as these two squeeze together the isobars pinch together, and this means that the winds will be picking up.

“Night-time temperatures in urban areas will be down in single figures and in rural spots we will be well down into single figures with a quite cold start on Saturday and Sunday.”

A major change next week will see high pressure gain control to push temperatures back into the 20Cs.

As temperatures rise, especially across southern regions, a veil of fog will await after chilly nights, he warned. 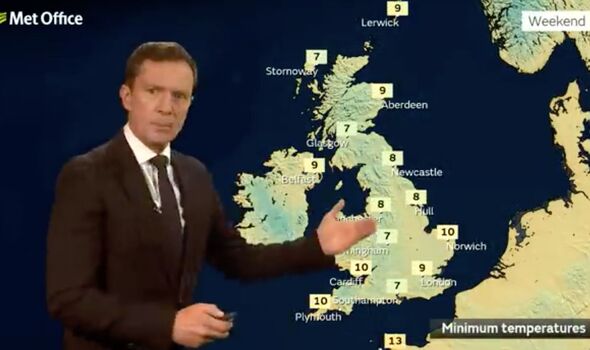 But with high pressure in charge through the next week, much of the country will stay dry and fine, he added.

He said: “Beyond the weekend, high pressure will control things and as it builds, those easterly winds will ease off.

“It is going to turn chillier, but temperatures are likely to rise as we go through next week and there is a chance of seeing thicker fog patches in the morning.”

Weather models show temperatures picking up after the weekend with southern regions nudging the low 20Cs by mid-week.

The north will feel cooler although Scotland and northern England will manage the high teens, touching 20C on eastern coasts.

Jim Dale, meteorologist for British Weather Services, said: “High pressure is firmly in control and that will bring some cooler air down from the north at the weekend.

“We are looking at temperatures dropping quite rapidly and the chance of a frost in parts of the country.

“Nights especially will feel cooler under the influence of high pressure as warmth radiates away from the ground.

“However, it looks like temperatures will rise again at the start of next week.”

Signs of warmer weather have prompted bookies to slash the odds on a late September scorcher.

Ladbrokes is offering 3-1 on this month tearing up the record books although it still has 4-6 on a last-minute washout.

Spokesman Alex Apati said: “There’s every chance this month breaks records for all the right reasons with a scorching end to September seemingly on the way.”

Rural communities could see a touch of frost this weekend as temperatures in parts fall to freezing.

Elsewhere, chilly nights will keep the mercury in the low single figures, only nudging up later in the day.

Mr Dale, author of Weather Or Not? said: “Somewhere this weekend, particularly exposed parts of Scotland and the glens could dip to freezing overnight.

“Elsewhere, we are looking at low single figures and there may well be a touch of frost and some chilly, dewy mornings.

“But later next week, it is looking warmer.”

Weathertrending’s John Hammond added: “After a weekend of fresh days and chilly nights, high pressure will topple across the country, bringing a fine start to the new week.

“But in the wake of this, another lobe of low pressure will drop down from Greenland, piercing our settled spell of weather.

“As the nights grow longer than the days, the week will end on a darker, wetter and windier note than it began on.”